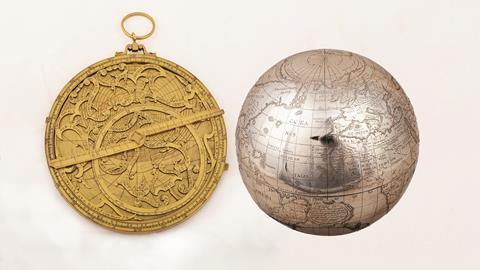 It is, unfortunately, a truism of the art world that wherever there is a demand for valuable collectables, forgers will emerge to exploit that market. Until the 1950s, no one suspected that this might be as true for antique scientific instruments as it was for old masters. But in 1951, following the opening of the Whipple Museum of the History of Science in Cambridge, UK, a new form of comparative analysis quickly dispelled this naive assumption. 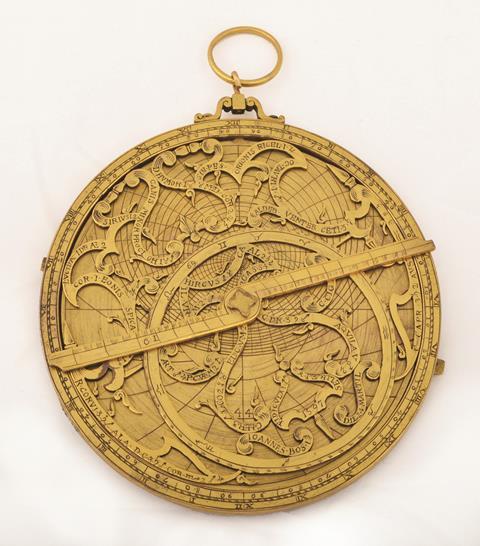 Source: © Whipple Museum of the History of Science, University of Cambridge (Wh.0305)

This astrolabe, supposedly made by Johannes Bos in 1597, was found to be a 20th century forgery in 1951 – the first time a fake scientific instrument had been identified

In the same year that the Whipple Museum opened, PhD student Derek de Solla Price was set to work researching its collection, which had been donated to the University of Cambridge in 1944 by local businessman Robert Stewart Whipple. Price soon made a startling discovery: one of the museum’s prized objects appeared to be in at least three different places at once. Comparing inventories from several museums, Price noticed that the Whipple’s beautiful gilt astrolabe, signed ‘Ionnes Bos I 1597 Die 24 Martii’, was listed in the possession of two other collections, signed with the very same date (to the day). Either Bos was an extremely prolific worker, or something fishy was going on.1

This was the first identified forgery of an antique scientific instrument. Price soon found evidence of more. Four further objects appeared dubious, all, like the Bos astrolabe, matching similar suspect instruments in collections across Europe and the US.

Price, like most sleuths on the hunt for forgeries, deployed a range of techniques to confirm his suspicions. The trained curatorial eye can spot discrepancies in workmanship, style and function that the innocent collector might easily miss, and the astute historian can trace the provenance of objects back to a suspect point of origin. Strikingly, all five of the Whipple’s fakes – as well as at least 20 comparable objects elsewhere – could be traced back to a single source: two sales at the Amsterdam dealership of Frederik Muller & Co. in 1911 and 1924, both under the direction of one Anton Mensing.2

As compelling as all this evidence seemed, it was not by itself conclusive. To confirm his suspicions, Price turned to his previous training in metallurgy. In his account unmasking what we now call the Mensing forgeries, Price concluded ‘if [the forger] had not made the fatal error of using modern electrolytically-manufactured copper sheet instead of ancient open-hearth metal (a difference readily detected by the spectroscope) it might have been impossible to prove conclusively’ that the objects were fake.3 Price’s critical eye and historical nous had no doubt been crucial, but it was the distinguishing power of the spectroscope that had proved decisive. Compared with 16th- and 17th-century instruments known to be genuine, the spark-spectra of all five fakes lacked the tell-tale signatures that indicated appreciable levels of zinc, silicon, aluminium, and silver impurities.

This sort of work (and these sorts of results) are still found today. A recent project by a team of curators, researchers, and antique instrument specialists at the Whipple has continued and expanded on the pioneering work of Price, and like him it has discovered several forgeries in the process.4 The techniques used in this work remain essentially similar to those deployed 60 years earlier, except that curatorial scrutiny can now be augmented by forms of scientific analysis that are much less invasive than spark spectroscopy. 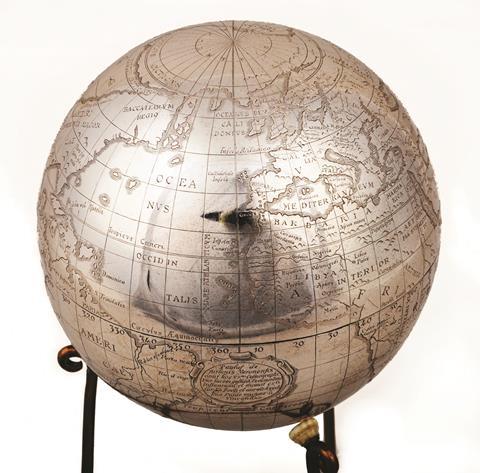 Source: © Whipple Museum of the History of Science, University of Cambridge (Wh.0365)

A silver terrestrial globe, purportedly by Paulus de Furlanis, c. 1575. A metallographic analysis in 2013 found it was a forgery made in the 1920s

Of particular use, thanks to its portability and speed of analysis, is the hand-held x-ray fluorescence (XRF) analyser. The Whipple Museum was fortunate to have received the support of early mathematical instrument researcher John Davis, who has used his own XRF analyser to test several hundred objects in the Whipple’s collection. This form of non-marking analysis can give the surface composition of an alloy to a sensitivity of around 0.05wt% for the key elements, and the results have proved striking.

Like Price, the Whipple team began by looking at instruments that comparative research suggested might make them suspect. Two silver objects were particularly intriguing: an exquisite engraved globe from the late 16th century and a pillar sundial by the renowned German maker Christopher Schissler. Both objects had previously been identified as dubious based on engraving analysis and apparent errors in their construction. The XRF data once again sealed the deal: both were found to be made from modern sterling silver that had been electroplated with rhodium. Since rhodium electroplating is a technique first deployed commercially in the 1920s, we can surmise that these objects were manufactured as deliberate forgeries for the collectors’ market shortly before Robert Whipple unwittingly purchased them.

These discoveries have opened up a wealth of leads that suggest the problem of fake scientific instruments extends well beyond the ‘Mensing connection’. But the challenge of decisively uncovering a fake remains frustratingly difficult. The ‘mistake’ of the forgers to work in pure electrolytic copper or rhodium-plated silver makes these objects easy to spot with metallurgical analysis, but it also makes them outliers; most scientific instruments are made in brass, which is notoriously difficult to date, even with good XRF data.

The next challenge for the Whipple Museum team and other forgery-minded researchers will be to use tools like XRF to amass a large corpus of data, across collections, from which it is hoped patterns and trends will emerge that give us another set of clues for the hunt.

1 B Jardine, Connoisseurs of the Card Catalogue: Scientific Forgeries and the Changing Nature of Collections, in: J Nall, L Taub & F Willmoth (eds.), The Whipple Museum of the History of Science: Objects and Investigations, Cambridge: Cambridge University Press, forthcoming 2019