In the pantheon of synthetic transformations, it has always been the rearrangement reactions that did their best to elude my eye. Simple disconnections such as olefins, lactones and cyclohexenes are relatively easy to spot and incorporate into a synthetic route, but detecting rearrangements still seems like an abstract ability. This presents a difficulty for aspiring synthetic chemists, as rearrangements are exceptionally powerful transformations, allowing access to structural motifs unavailable using other fragment unions.

Erick Carreira's synthesis of indoxamycin B is a great case in point, employing two rearrangement reactions.1 The target is certainly complex - six contiguous stereocentres arrayed across a 5,5,6-tricyclic ring system is not a 'Sunday afternoon' synthesis. Two of those stereocentres are quaternary, and that's an area where rearrangement reactions often prove their worth. However, Carreira and his team at the Swiss Federal Institute of Technology (ETH) in Zurich, also had a biological rationale for their efforts, as this family of natural products has shown relatively potent tumour cell line inhibition.2

The team's efforts began with the manipulation of 3,5-dimethylbenzoate, a simple aryl compound. Reducing the aromatic ring under (the very beautiful) dissolving metal conditions, and manipulating the functional groups took them to the first intermediate shown (figure 1) in four relatively uneventful steps. They created a potent 1,3-dimethylallyltitanocene reagent in situ by treating (E)-4-methoxypent-2-ene with a strong base and dichlorotitanocene; alkylating the cyclohexa-2,5-dienone with this reagent resulted in a mixture of olefin geometries on the new sidechain. A further helping of base prompted one of the more identifiable rearrangement reactions: a [3,3]-sigmatropic oxy-Cope. As the starting material was present as a mixture of olefin geometries, this unfortunately transferred into the product. This was not a problem, however, as that stereocentre is flattened out in the following step.

Treating this intermediate with palladium acetate under oxidative conditions then prompted cyclisation and formed the first five-membered ring, setting three stereocentres along the way.

The team then destroyed a temporary ring by hydrolysing the acetonide acetal protecting group. This left two alcohol sidechains, one of which was needed in the next step: an epoxidation reaction and ring closure. Olefin epoxidation is not a particularly challenging reaction - but only if one isn't particular about the location or geometry of the epoxide. 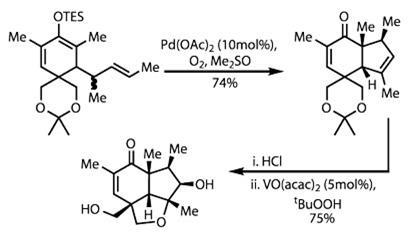 In this case, there are two faces each of both an alkene and an enone to choose from, giving four possible products. Vanadyl acetylacetonate selectively targeted the cyclopentene, attacking on the convex face of the bicycle. The epoxide was attacked under these conditions by the proximal alcohol, forming a further ether ring (figure 2).

The team had one last rearrangement to showcase - one that rang only the faintest of bells in my brain. Moving on a couple of steps, they set up a Saucy-Marbet rearrangement (effectively a Claisen rearrangement involving a propargyl alkyne), encouraged by a trinuclear gold complex.3  This neatly formed the second quaternary stereocentre, but more importantly, generated a reactive allene (figure 3). After reducing the nearby ketone to an alcohol, a little more gold neatly brought the two together into a tetrahydrofuran ring (my PhD supervisor often advised thinking of gold complexes as 'big protons' when trying to understand their mechanics!). 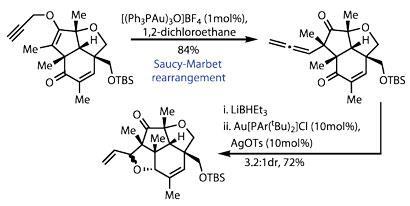 At this point, the group was tantalisingly close to the target, but still had a few more steps to complete. There is actually one tetrahydrofuran ring too many, so they reductively cleaved the unwanted ring with samarium diiodide, followed by oxidation and olefination to append the unsaturated ester sidechain. However, while manipulating the remaining olefin sidechain delivered their intended target, the spectral data did not match that of the natural sample. Careful examination revealed that a misassignment was to blame, and a slight adjustment to the synthesis endgame proved this to be the case by delivering a synthetic match to the natural material.