Like many organic chemists, I spend my time working with new compounds. Chemical space is so vast that every chemist in the world could easily do nothing else for decades (or centuries). In the pharmaceutical business, new (patentable) chemical matter is a fundamental part of most projects: if something has already appeared in the literature, then it can’t meet
a patent’s novelty requirement.

New compounds can have new biological activity, of course, which is what we’re actually after most of the time. But there’s usually no way to predict that activity. If there’s one thing you learn from studying toxicology, it’s that there’s a lot we don’t know about toxicology. What, then, are the chances that normal chemical research will produce something dangerous by accident? 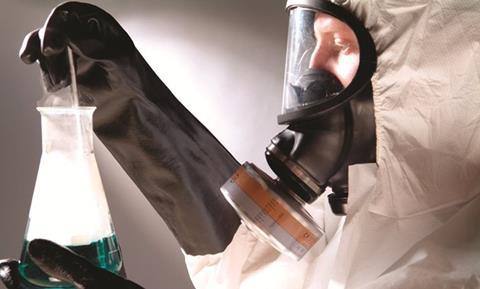 New compounds should be handled with care and respect, but it is certainly possible to go overboard…

Most dangerous substances announce themselves by their structures and reactivity, and a competent organic chemist should be able to read those signs. Anything close to the structure of a poisonous natural product should be respected, naturally. An even more general rule is to treat gaseous reagents (or liquids with high vapour pressures) with special caution. The high surface area of the lungs provides a chance for real trouble. Spilling a solution of phosgene on your skin is dangerous (not to mention corrosive), but it could probably be washed off quickly enough to minimise the damage. Inhaling the same amount of phosgene vapor, though, could easily lead to irretrievable lung damage and death. Every chemist should be alert to the inhalation hazards of reagents such as diazomethane (and its commercially available trimethylsilyl analogue). Small volatile ring systems that can easily eliminate strong acids have proven fatal as well, a lesser-known hazard.

But such things can, at least in theory, be known ahead of time. What about the things that can’t? History is only partly reassuring about this. Huge numbers of new organic compounds are produced every year, with no obvious ill effects. Hopefully, they’re handled with some sense of responsibility, often made in small quantities, and not generally ingested. That argues for the great majority of new compounds being relatively tolerable. But there are exceptions. And unfortunately, those exceptions are enough make anyone stop and think.

The classic example is 1-methyl-4-phenyl-1,2,3,6-tetrahydropyridine (MPTP). This perfectly reasonable-looking small molecule (if one didn’t know better) would look like a worthwhile addition to a fragment screening library. But as every organic chemist should now realise, it’s a terrible toxin, causing irreversible damage to the dopamine-rich parts of the brain and the sudden onset of something very close to advanced Parkinson’s disease. Later work established that this takes place through a combination of cellular uptake, metabolic activation and enzyme inhibition in an unlikely (but clearly not impossible) cascade.

We now know to watch out for this chemotype, but it’s absolutely impossible to say how many other things like this might be lurking out there. Some of the common properties that medicinal chemists seek (cell penetration, metabolic stability) could give a new poison the same sort of advantages as they would give a new therapeutic agent. But can we treat every new compound we make in the labs as a potential MPTP? Wouldn’t that bring research to a sudden halt?

Well, to a first approximation, we’re already working this way, or should be – no, not in body suits and scuba gear, but treating with due care and respect. MPTP’s effects were discovered in intravenous drug abusers, as a contaminant in the recreational opioid 1-methyl-4-phenyl-4-propionoxypiperidine (MPPP). They’d had the worst possible exposure to it. Substantially larger doses would have been needed by other routes. I would not wish to encounter MPTP at all, but if I had to, weighing out small amounts of it with gloved hands would be far from the worst way to do it. Compounds with substantial in vivo activity at the microgram (or sub-microgram) levels that a working chemist might absorb are rare indeed, although the example of LSD (lysergic acid diethylamide) shows that it’s still possible.

An LSD-level poison whose structure gives no advance warning – that’s what we have to fear. The chances of making something like that are surely extremely small. Right?