How a penniless immigrant made himself at home in the lab 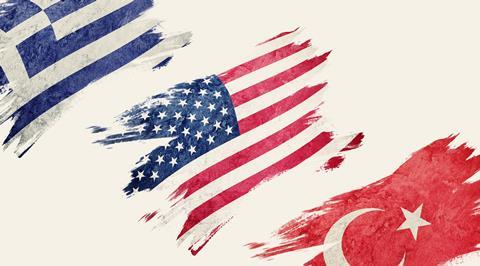 Identity is a slippery idea that has grown in importance as the siren call of nationalism has been sounded in country after country. Such appeals leave immigrants with a deep sense of unease. The call’s very purpose is to exclude them from a sense of belonging in the country that they live in by choice, rather than by the accident of birth. As the story of an immigrant chemist illustrates, this exclusion is a mistake.

Loukas Kyriakides was born to ethnic Greek parents in Bursa, Turkey in 1884. He was the fifth of seven children and studied at an American missionary school, Anatolia College, in Marsovan (today Merzifon). The school attracted students from far and wide; there were many ethnic Armenian children and teachers. Ambitious and confident, he graduated top of his class in 1902 and convinced his parents to let him emigrate to America. He landed at Ellis Island, the immigration processing centre in New York, penniless but full of hope.

The lab must have been a welcome refuge

Kyriakides enrolled in the chemistry programme at the University of Michigan in 1905 and graduated with a PhD on the colours of triarylmethane dyes in 1909. It was a tough four years. Michigan winters were truly frigid and money was tight. He would later tell of lining his shoes with cardboard and of fashioning a base-layer out of newspaper to keep warm in his bedroom. The lab must have been a welcome refuge.

Strategically, Kyriakides shortened his name to Kyrides (easier to pronounce, he thought). In 1913 he became one of two young chemists hired by the Hood Rubber Company to develop cheaper synthetic alternatives for natural rubber latex. The two focused first on butadiene and then its dimethyl analogue, which they could make by routine chemical steps. They successfully polymerised the olefins, thought to be the first successful preparation of an elastomer. When the rubber proved too leathery for car tyres, they switched to isoprene. But they soon realised that a viable commercial process was unlikely and the fall in the price of natural latex put an end to the project.

Kyrides was then hired by the pharmaceutical company Parke Davis to develop new drugs against syphilis. He spent six months making arsenic compounds, only for another company to disclose and patent identical work. He switched to mercury compounds, and developed a hydroxy salicylate of mercury, which he was sure was very effective. The company rejected it. Kyrides left the firm in disgust and approached a doctor friend who was doing syphilis research – and who also had an incurable form of the disease and was keen to try the drug on himself. It seemed to work, and the drug was marketed under the name Mercurosal. Although a couple of independent studies later suggested that its effect was modest, Mercurosal continued to be sold until the arrival of penicillin in the 1940s. The royalties earned by Kyrides helped support his siblings who had joined him in the US.

He then set up a chemical supplies business with a colleague, attempting to make triarylmethane and aniline dyes from scratch at a time when there were severe shortages of raw materials. Perhaps because they would sometimes sleep under the boiler in winter to keep warm either he or his partner (it’s not clear which) developed a severe occupational illness which included abdominal pain, cyanosis of the skin and lips as a result of exposure to aromatics and nitrogen oxides. Eventually the plant burned down, putting an end to the pair’s ambitions.

Kyrides worked on a bewildering range of projects

Over the next few years, Kyrides worked in New York, Philadelphia and then Buffalo, where we went back to making dyes with the National Chemical Aniline Company, one of the largest producers in the US. On spare evenings, Kyrides would spin across the parquet ballroom dancing – he was apparently a superb dancer.

In 1928 he joined Monsanto’s research labs in St Louis, Missouri in 1928. He was a complete lab rat who worked on a bewildering range of projects. There were sulfa drugs, solvents and insect repellents. He developed commercial preparations of food flavourings, and plasticisers based on catechol and phthalic acid esters for the growing consumer plastics market.

Even when promoted to director of organic chemistry research, he refused to sit behind a desk. ‘The laboratory is my life, and happiness comes to me only when my hands are doing things that may someday prove of lasting benefit to mankind,’ he said, adding that if he died at the bench, he wouldn’t mind. An indication of this passion for lab work is in a footnote to a 1941 Organic Syntheses procedure, in which Kyrides suggests using a rubber sleeve, lubricated with a drop of glycerol, slipped over the end of the adapter to seal a mechanical stirrer. Much simpler than messy mercury or oil-sealed bearings for glass stirring rods, the method appeared in the next edition of Vogel’s Practical Organic Chemistry and caught on widely.

In parallel with his day job, Kyrides set up a new chemical intermediates company. The company expanded fast and in 1945 was bought by Miles Laboratories, with Kyrides as chief executive. Now wealthy, but still a modest man, Kyrides never forgot his old school Anatolia College, which had suffered horrendously in the 1915 genocide of the Armenian community. Re-established in Greece in the 1920s it gradually expanded again, supported by generous gifts from Kyrides and other alumni. When he retired in 1962, Kyrides returned to Greece, buying a plot of land close to the College.

I wonder how Kyrides would have described himself. Greek? Turkish? American? Maybe, like so many of us, he saw himself as a quantum superposition of states, collapsing differently in different situations. Yet the more important question to ask is why should the answer matter?