How long should scientists stay at the bench, asks Derek Lowe. How long is a piece of string? 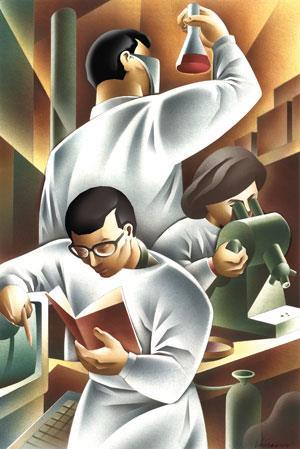 Most chemists start out in their first jobs by doing a lot of work at the lab bench. That’s only fitting: they’ve just come through an intensive period of scientific training, which has probably involved a truly excessive amount of bench work. Their skills are (one hopes) better than they’ve ever been. So the hands are in good shape to contribute, which is good, because in most cases the brain needs some time to catch up.

That’s because no new employee is in a position to know what the key issues are in their new job. They haven’t had a chance to experience them firsthand. In my own field, chemists typically come into a drug discovery effort knowing very little about the biology of the disease they’re targeting, and even less about such industry-specific topics as toxicology testing and formulation. But they do know how to make new molecules, and new molecules are definitely needed. So they’re put to doing that as quickly as possible, with the understanding that they’ll pick up the rest of the details as they go along.

I believe the process is very similar in many other industrial positions. In academia, the skills that need to be picked up include teaching courses, writing successful grant applications and running a research group effectively. All of these need to be learned on the job. While they’re getting their groups going, young professors often have to pitch in with the lab work as best they can, in the hopes of generating publishable (and fundable) results.

There are excellent scientists who are hopeless at administration, and capable administrators who should avoid flammable solvents

In time, though, chemists of all sorts pick up experience, and their responsibilities change. Some move into management and administration, now worrying as much (or more) about budgets, project management and departmental issues as actual synthesis. No one expects them to do much (or any) bench work. To be honest, in some cases that’s a good thing for everyone involved. But in other cases, talented experimentalists can find themselves gradually spending more time in their offices and less at their fumehoods. Years later, they end up wondering exactly how that happened. There are also those who spend a good deal of effort to stay on the ‘scientific track’, and resist being completely taken away from lab work.

It’s worth remembering, though, that in some research cultures people are expected to get out of the lab as quickly as possible. The traditional German and Swiss industrial style, for example, had even young PhD chemists in their offices, supervising laboranten, experienced lab assistants who did most (or all) of the actual bench work. British and American chemists have always found this system a bit odd, but no one can say it’s been ineffective. Is there some rule, then, about when an experienced chemist (of any age) should make room in the lab for someone else?

After thinking this over, the only advice I can give is to leave as much flexibility as possible for individual cases. People should go where their passions and abilities take them. If a chemist feels as if they’re just going through the motions in their lab work, they almost certainly are. These people (and their organisations) would be better served if they took on some other duties. On the other hand, no one is going to set up experiments more diligently than someone working on their own great ideas. As long as someone still has (or ever had!) the skills to do that, they should have the opportunity to do it.

Sticking with a formula, though, is asking for a series of small disasters. There are excellent scientists who are hopeless at administration, just as there are plenty of capable administrators who should never be allowed near flammable solvents. If an organisation insists that a chemist with x years of experience should not have a fume hood, but should spend their afternoons in steering committees, they run the risk of ending up with the sort of people who are only fit for steering committees. On the other hand, an experienced scientist at the bench should be working on hard, high-risk problems, not just cranking out a series of trivial sulfonamides (even if that does allow them to skip more meetings). Is your own organisation flexible enough to deal with both of these?