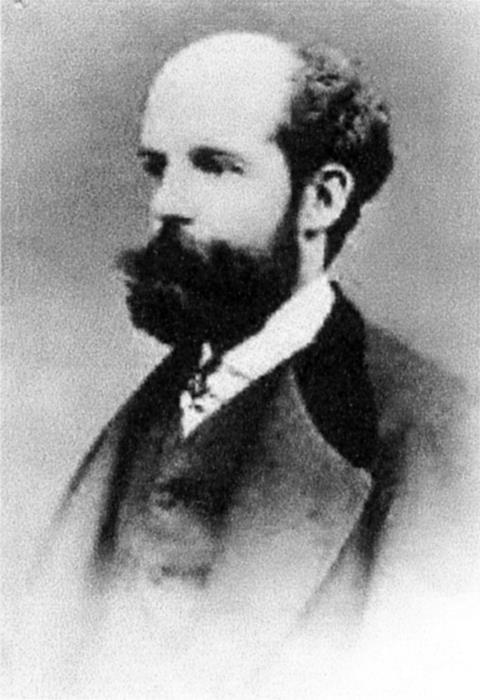 French electrical engineer who invented one of the first modern batteries

There is a breathless excitement associated with the field of batteries and energy storage at the moment. As the cry of ‘electrify everything’ spreads across transport, heating and beyond, journals are filled with reports of new electrodes and electrolytes. The effort echoes the excitement that spread during the 19th century when electricity went from a peculiar phenomenon in physics to a credible source of electrons.

Alessandro Volta’s report that an alternating series of metal plates connected by acidic or salty solution could produce electric shocks comparable to what could be had from a Leyden jar kicked off a huge flurry of activity across Europe. William Nicholson demonstrated the link between electricity and chemical discovery, before Humphry Davy’s wild reports and public demonstrations did so more spectacularly. The result was a burst of creativity as inventors tried different combinations of metals and separators.

John Daniell at King’s College London used copper and zinc electrodes separated by a porous pot to produce his ‘constant battery’. While it delivered a steady voltage, the arrangement produced limited current. A young French inventor, Armand Callaud, dispensed with the porous pot by using differences in density to segregate the copper and the zinc ions. This cell drew much higher currents but needed to run continuously to maintain the density gradient. It was also sensitive to movement and vibration.

William Grove used a porous pot to separate platinum and zinc electrodes immersed in sulfuric and nitric acids to make a cell with significantly higher voltage output, but it emitted a steady wisp of brown, choking nitrogen dioxide. Then Robert Bunsen developed a much cheaper and more widely used cell. He replaced the expensive platinum cathode with a pressed carbon rod. This cell too produced NO2 but its simplicity made it one of the most reliable batteries that Henri Moissan used to liberate fluorine from liquid hydrogen fluoride. But true reliability and portability remained elusive.

The modern supermarket battery can be traced back to Georges Leclanché, a politically active French engineer and chemist, whose father was a lawyer prominent and political enough to fall foul of King Louis Philippe’s government in the year of revolution, 1848. His mother was roughed up by the police a few days after the birth of Georges’ brother and died as a result. His father therefore fled to the more liberal England, in an age where it welcomed political dissidents of all kinds.

After completing his schooling, Georges returned to France in 1858. He studied engineering at the prestigious École Centrale engineering school in Paris, graduating in 1860. He was then hired to develop a network of electric clocks for the recently established railway firm that linked Paris to Strasbourg. Dissatisfied with the power sources used by the firm, he began to explore alternatives. Then the political situation in France got hot again, and in 1863 he quit and moved to Bruxelles in Belgium, where he set up a small lab to develop his new cell.

Previous cells required two different electrolytes, typically separated by a porous barrier. Could one simplify the cell and use only a single liquid? Georges used zinc for the anode and chose manganese dioxide for the cathode because of its inertness and good electrical conductivity. As the manganese dioxide source he recommended using the mineral pyrolusite ‘fairly free of gangue’, taking care not to grind it too fine to maintain conductivity. He then added carbon as an electrically conducting support and pressed the mixture into a rod. For the electrolyte he tried many different alkali metal salts. None was satisfactory. But with concentrated ammonium chloride he obtained a steady voltage and a steady current, far superior to Daniell’s battery. 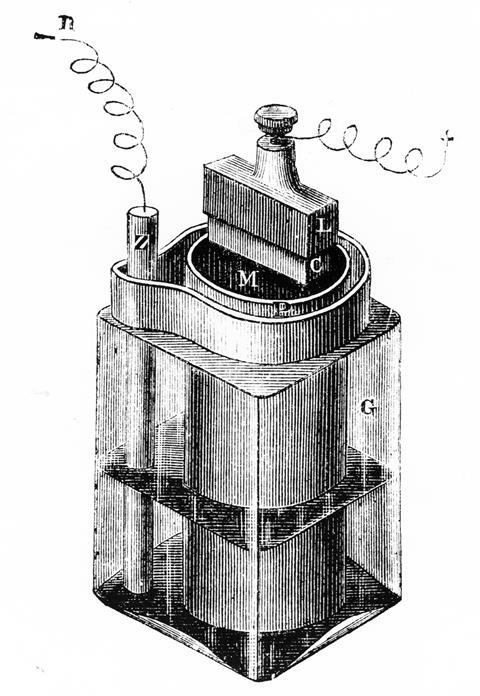 The Leclanché cell’s first innovation was to use a single electrolyte; the second was to gelatinise the electrolyte to make the battery truly portable

He found an investor in the electrical engineer and entrepreneur Charles Mourlon. With Georges’ brother Maurice they started making batteries that were soon in use in telegraphy and the silver electroplating business. With the fall of Napoleon III in 1870, the Leclanchés moved back to Paris, with Georges still tinkering and optimising his battery. In 1873, he added starch to the ammonium chloride solution. This gelatinised nicely, giving the required electrical conductivity and making the cell completely portable. The ‘dry cell’ was born.

Georges never lived to see the battery market really take off – he died of cancer in 1882. Leclanché cells would be the world’s leading battery until the acidic ammonium chloride was replaced with potassium hydroxide around 1900, quadrupling their capacity. Today the alkaline zinc/manganese battery can be found powering myriad everyday applications.

And yet there remains a fundamental flaw with these brilliant power sources: you use them once and then throw them away. With rechargeable batteries everywhere, why do we still allow this supremely simple, yet disposable, electrochemical tech in our electrified world?