Your letters on renaming the kilogram, quantum tunnelling and mechanochemistry

With redefinitions of certain key units like the mole (Chemistry World March 2018, p5) and the kilogram in the offing, isn’t it perhaps also an appropriate moment to take another look at the very word ‘kilogram’ and find a suitable alternative for it? 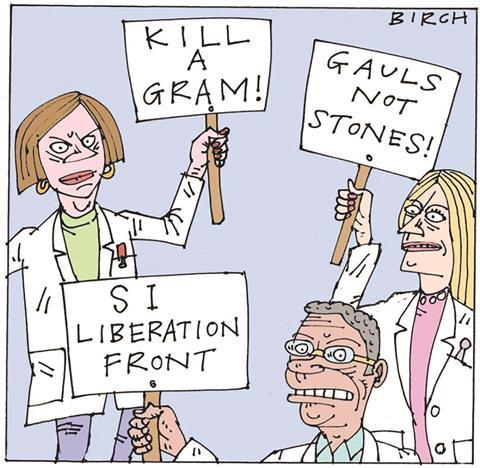 One of the key features of the SI system is that ‘there is one and one only SI unit for each physical quantity’. Logically, in sympathy with this definition, the kilogram should ideally have been renamed at the same time. Today we are left with an unsatisfactory fudge: decimal multiples of the kilogram are to be referred as though the gram were the base unit. For examples, 10-3 kg is not 1mkg but 1g; and 10-6 kg is not 1µkg but 1mg, and so on.

Presumably this matter was not sorted out in the first place because of competing voices wanting to somehow retain the historically important word gram. The kilogram as used as a base unit is, however, surely a hiccup from the manner in which scientific history has developed so far. Do we really want to be stuck with it for ever?

The SI system is the best one yet devised, but would surely be better still if this issue could be resolved, with any objections considered carefully. Surely, all we need is a suitable alternative word for kilogram. I suggest the ‘Gaul’ (G). It would be a suitable recognition to the French for their historic contribution to their careful custodianship of the metallic kilogram, and it would finally see off the gram whilst remaining comfortingly close to it.

The future of mechanochemistry

The recent article on mechanochemistry (Chemistry World, January 2018, p38) makes many good points, including the one about the need for a stronger theoretical basis for the method. My interest in this area focused on the use of a small amount of liquid solvent (normally just a few drops!) to ‘assist’ the mechanochemical reaction. I think some purists in the field would like to focus entirely on reactions in the total absence of any liquid, but there is gathering evidence that, even in situations where this is intended to be the case, the mechanochemical reaction may occur due to the presence of a small amount of liquid inadvertently present in the reaction mixture. Indeed, even the presence of atmospheric moisture has been shown to greatly enhance the yield of a mechanochemical reaction. From a practical point of view, for the purpose of using mechanochemistry to achieve efficient and rapid reaction, if the inadvertent presence of liquid solvent greatly enhances the reaction, why not deliberately add a small amount of the appropriate liquid to ensure such a result? This process reduces the amount of solvent required for a reaction by several orders of magnitude and so is just as good, from a green chemistry point of view, as one that uses no solvent at all.

I am not sure to what degree mechanochemistry can replace or supplement more conventional and traditional reaction methods, but it is clear that the more chemists become involved in this either at an empirical or a theoretical level, the more likely we are to see progress. Hopefully the recent Chemistry World article will encourage more chemists to investigate this area, just an earlier article (Chemistry World, July 2007, p35) originally set me off down this path!

I was delighted to read February’s article discussing the often-overlooked contribution of quantum mechanical tunnelling to reaction rates (Chemistry World, February 2018, p38). As a theoretical chemist, there are a few ‘clues’ which experimentalists can use to identify tunnelling without extensive experiment or computation. From school, we consider chemical reactions to have an Arrhenius temperature dependence, so plotting the logarithm of the rate against inverse temperature leads to a straight line with a negative slope. However, quantum tunnelling almost always increases the rate of reaction compared to a classical mechanism, making this line bend upwards – a signature of tunnelling. For some reactions at very low temperatures this line becomes flat and the rate temperature-independent.

It’s also worth noting that, while tunnelling can be explained using a wave-like picture, an accurate description emerges simply by considering Heisenberg’s uncertainty principle, which implies that quantum particles are delocalised. A bit like a high-jumper whose centre of gravity is always beneath the bar, a quantum particle can ‘sag’ over the barrier such that its average energy is less than the top of the barrier. These arguments can be formulated mathematically in quantum transition-state theory, which was first discussed in the 1930s but not proven until 2013.

Lastly, quantum tunnelling and delocalisation can have enormous effects, even in biological systems at room temperature, such as leading hydrogen atoms to react 100 times faster than deuterium, or an enzyme to be 10,000 times more acidic than conventional arguments would suggest.

Keen puzzlers would have noticed that last issue’s wordoku (Chemistry World, March 2018, p64) contained one U too many. We apologise for this error and have provided the corrected grid online: http://rsc.li/2p680mi