Readers produce a model view of June Lindsay’s work, and describe a creative use of parafilm 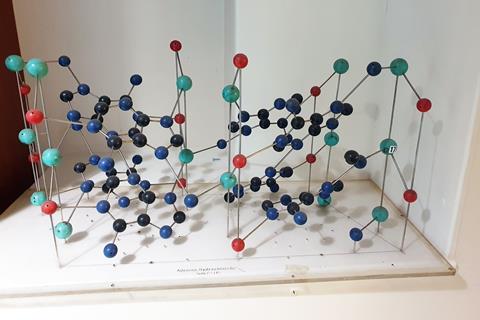 In the January issue, Katrina Krämer wrote about June Lindsey, who had carried out crystallographic research in the Cavendish Laboratory under Lawrence Bragg and Will Taylor during the late 1940s. One of the important crystal structures derived by Lindsey was that of adenine hydrochloride, a molecule whose structure was a necessary step towards the solution of the structure of DNA by Francis Crick and James Watson. She published her work in 1948, under her maiden name of Broomhead (DOI: 10.1107/S0365110X48000855).

I joined the crystallography laboratory at the Cavendish Laboratory in Cambridge, UK, in 1969 to work with Helen Megaw. By then, Bragg had left many years earlier to go to the Royal Institution and Taylor and Megaw were soon to retire. As a result I ended up in charge of the crystallography laboratory. In 1976, I moved to Oxford, taking most of the equipment and records of the laboratory with me. This included many crystal structure models, and I was delighted to see that I still had June’s adenine hydrochloride model. I attach a photograph; the model can be viewed in the Clarendon Laboratory, Oxford.

I read the article ‘Burning metal to make clean energy’ with great dismay. I would strongly encourage the proponents to perform a complete energy audit of all operations and processes involved.

Energy must be used to build and operate equipment for the mining of metal ores. More energy is needed to refine those ores. The refined ores are often shipped great distances to smelters or electrolytic reduction plants where huge amounts of energy are used to produce the metals. The above steps can produce greenhouse gases, other atmospheric pollutants, tailings ponds and waste heaps. Mining operations often involve the removal of trees and other vegetation, leaving behind scarred landscapes which take many decades to recover. To transport the metal to locations where it would be stockpiled and burnt would require more energy and the emission of more greenhouse gases. Since the metal cannot be pipelined, society would be stepping backwards into the age of solid fuels (like wood and coal).

Yes, burning metal could produce heat (and quite possibly nitrogen oxides). What do the proponents aim to do with the combustion heat? Feed it into inefficient steam boilers to power steam turbines? And what about the metal oxides that would be produced? Are they to be collected and reduced back to primary metals? This reduction would require more energy – and would probably produce further greenhouse gases.

The aluminium–air battery was also mentioned in the article. Here again, a full energy audit would reveal the huge energy inputs required to produce the aluminium. Operating the battery produces a sludge of aluminium hydroxide which quickly retards the operation of air cathodes and must be removed from the cells and either dumped or processed (with some difficulty) back to ‘new’ metal.

The burning of metals would be a very energy consuming and polluting way to generate power!

The December 2021 edition contained two articles on the same process to produce kerosene or other liquids from ambient carbon dioxide. This process seeks to address the problem that carbon dioxide emissions from aviation are continuing to rise.

There are other ways to reduce the carbon dioxide emissions from aviation. The simplest one is to stop flying. The French government is already restricting internal flights. Travel around Europe is possible by high speed trains or overnight sleepers. Indeed the Austrian federal railway is expanding its network of sleeper trains. Another way of reducing aviation would be to tax aviation kerosene at the same rate as road fuel.

Living in the UK has always been impossible without some energy for heating and cooking. It is possible to live without flying, which is a recent innovation.

The process outlined in Chemistry World can produce other products such as methanol. Of course it could be used to produce home heating oil.

Parafilm is undoubtedly my favourite material for apple-grafting. This needs the growth tissue of a parent tree, the scion and a rootstock to be applied tightly for many months to form a healthy union. The eventual tree height is determined by the rootstock.

My preferred method is side grafting. In this way, 1–2 inches of a parent twig and root stock of similar thickness are sliced to a tapering end, then bound together with several rounds of parafilm. Its elasticity, conformability and durability means it adapts to every shape, contour and nodule of the two branches and it stays firmly in place for 24 months or longer. Quite long enough for a healthy ‘take’. Moreover, my success rate for a series of grafting is usually 80% or more: not a bad yield for any chemical reaction!