A group of scientists in New Zealand recently announced that they had genetically modified onions in such a way as to eliminate the lachrymator. Having spent many years studying the chemistry of this phenomenon, I would like to assure them that they will also have removed the flavour for which onions are so highly prized.

The lachrymator is derived from the enzymic attack on a cysteine based substrate which occurs when an onion is cut in the presence of oxygen. In outline, this releases organic thiosulfinates, pyruvic acid, ammonia and the lachrymator, which is unstable and rapidly splits to give propionaldehyde and elemental sulfur. Additional reactions then take place. The thiosulfinates disproportionate into disulfides and thiosulfonates, which are themselves reduced by the ubiquitous hydrogen sulfide, and at the same time incorporate the elemental sulfur liberated from the lachrymator to form a range of polysulfides. The propionaldehyde from the lachrymator combines with the ammonia and more hydrogen sulfide to form a range of complex heterocycles.

Thus it can be seen that the lachrymator and sulphur-containing compounds play a pivotal role in the development of the flavour. Furthermore it is generally accepted by flavourists that the intensity of the lachrymatory effect is directly linked to the intensity of the flavour. It is also the case that since the introduction of the clean air act, the levels of atmospheric sulfur have reduced along with the strengths of onions, which prefer the easy route of absorption of small molecules through the leaves rather than the more difficult route of sulfates through the roots.

My own research has found that the headspace analyses of volatiles liberated from pulped onions show totally different profiles from those from cut onions. Indeed, differences can be detected from the use of either a blunt knife or a sharp one. And onions pulped in the total absence of oxygen do not develop any volatiles at all in their headspace - implying that the pulp would be tasteless.

I’ve been retired for fifteen years but, as a foundation member of the UK’s Open University, I was directly involved in that institution’s development of the first external chemistry course available to virtually anyone over 21 years old at that time. It was integrated; interdisciplinary; student oriented; problem based; multi-media; and so on.

Sure, the internet is remarkably more sophisticated now, but the reality of the way that chemistry can be communicated to students probably hasn’t changed all that much. The introduction of ’teaching technology’ isn’t all that much chop unless the design of the teaching material is suitable for the students and employs a suitable approach to the technology.

Forgive me if I’m a bit cynical about the ’education revolution’, but I’d be happy to bet that that hasn’t changed.

A pharmacist friend gave me a cutting of your Classic Kit column (Chemistry World, February 2008, p67) about air pump experiments. I am a history artist and have been working on Robert Hooke for five years, trying to put the poor man back into history rather than let him go on in obscurity. One of my paintings is of Hooke, Boyle and the air pump, setting up an experiment at the back of Dr. Crosse’s apothecary shop in Oxford (see picture). For the air pump I used Hooke’s own working drawing. My image of Hooke is based on written descriptions by his friends Waller and Aubrey, as no contemporary portrait has survived. Boyle had several portraits painted, so I was able to use these in portraying him. 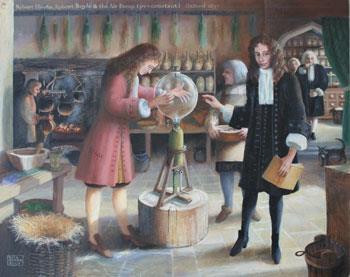 The servant holds the bowl with the pigs’ bladders while Hooke tries out the glass for size. Boyle is there to oversee the experiment. Dr. Crosse is in the background looking anxious. Note the water supply (a wooden pail), the fume cupboard (chimney) and overalls (ordinary clothes to denote status). The cat is in charge of pest control. What a long way the modern lab has come in 300 or so years.

I much enjoyed Joe McEntee’s article on high temperature superconductors (Chemistry World,  February 2008, p42), which gave a good summary of the current state of the science. However, I think he is wildly over-optimistic in thinking that cables for the electricity grid based on current-technology superconductors are on the point of being rolled out commercially. There have been technically successful trials, but the economics still do not stack up. The cost of ownership of a currently available superconducting system, with its requirement for continuous cryogenic cooling, remains high in comparison to transmission-loss savings. In contrast, copper- or aluminium-cored high voltage cables with cross-linked polyethylene insulation are effectively fit-and-forget items with trouble-free working lives of several decades, though with admittedly higher transmission losses.

The limited range of superconducting materials we know at the moment may not be the final answer for power transmission. I would encourage materials chemists to screen more compounds for superconductivity - all it needs at the simplest level is a magnet and some liquid nitrogen or (here’s hoping) dry ice. The breakthrough material may be sitting in a dish on someone’s bench at this very moment.

In answer to a question in your previous issue (Chemistry World, February 2008, p36), there was indeed a survey of mortality rates of professional chemists some years ago. As I recall, it was expected that as chemists were likely to have suffered more exposure to toxic chemicals than the general population, they would show a higher mortality rate.

The results showed the opposite, even after careful correction for age, social class, and so on. However, it was also realised that far fewer chemists were smokers than the general population, and the beneficial effect of this factor so outweighed any effect of occupational exposure that no other conclusions could be drawn.

I was very interested to note several references in the February 2008 issue of Chemistry World  to collaborations between chemists and chemical engineers. In fact it is possible to be both. I graduated as a chemist and found myself in a chemical engineering and materials technology environment, later gaining corporate membership of the Institution of Chemical Engineers by thesis. Most of my life has been at or over the interface. The outcome of many reactions, the nature of many products, and the efficiency of processes, can hinge on the design of the reactor and other hardware. Certainly chemists should not be afraid of reading chemical engineering textbooks.

The report from the Daily Planet (Chemistry World, January 2008, p84) had the wrong date: 10 February 2020 is a Monday, not a Tuesday as stated. If John Emsley used the Royal Historical Society’s Handbook of Dates  he may not have used the version for a leap year, which would account for the error.