Why is Chemistry World so shy about showing the language of chemistry on its pages?

Why is Chemistry World so shy about showing the language of chemistry on its pages? We do after all possess, along with music, one of the most efficient notations ever invented. So, in the latest edition I was very interested to see an article on marine adhesives (Chemistry World, Dec 2011, p52) - a current interest of ours. On turning to the article, however, not a structure to be seen in four pages and hence no feel of the chemistry involved. This prompted me to look through the entire copy: yes, a one page article full of formulae but the only other formulaic text was in an advert. In the Hopkins article, chemical names were spelt out - this is just silly as we have to write the formulae to make sense of them anyway. Unreadable space-filling models and acronyms do not suffice. Are all of our ’science writers’ molecular?

Chemistry World responds: Articulating ideas and concepts is an essential aspect of science and this is equally true of science journalism. Formulae are an elegant and effective means of communicating chemistry and where an article demands their use for clarity of expression, they are included. As a science news magazine with a broad readership, our decisions in this regard must be sensitive to both the needs of the story and the appetites of our readers.

Having considerable background in the thermodynamics of natural gas hydrates, I am concerned about a statement made in the article on this topic (Chemistry World, Dec 2011, p16). It is stated that reducing the pressure in the well ’melts’ (inverted commas in the original) the methane hydrates, releasing methane and liquid water. In my own deliberations on such matters I have taken it that methane in the hydrates is in phase equilibrium with methane gas trapped in pockets within the ice. If so, release of methane from such pockets will reduce the pressure and transfer of methane from the hydrates to the gas phase is a response to that. This is not akin to melting.

Chemistry World responds: The term ’disassociates’ was used by the author of the article to describe the methane release. In adopting the term ’melts’ for publication, the enclosing inverted commas were intended to indicate a simplification in terminology. 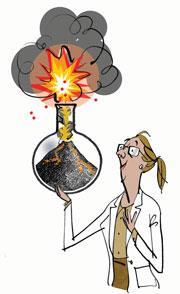 I was delighted to see David Jones’ ’sodium and water’ item in ’The last retort’ of your December edition (Chemistry World, Dec 2011, p80). It reminded me of correspondence in The School Science Review many years ago about the unpredictable violence of this reaction. I seem to recall the conclusion was that a tiny jet of superheated water or steam might be blasted into the body of molten metal causing a small explosion sufficient to splash the liquid metal over the nearby bench or, even more alarmingly, to send blazing droplets high into the air.

While sharing Jones’ opinion of the effect of health and safety regulations, I think that 0.5g of sodium is not a ’tiny lump’. Such a piece will almost inevitably ignite the hydrogen and will probably explode.

Once, as a young head of department with a bottle of ancient and corroded sodium to deal with, I waited until an evening of heavy rain and threw it, piece by piece into the middle of an inundated playground. The subsequent pyrotechnics were most gratifying.

I have never seen the liquid alloy-chloroform explosion but the alloy itself is surprisingly easy to make just by gently pressing pieces of the metals together under liquid paraffin. This will even happen spontaneously as I found when a colleague returned the metals to the wrong bottles after a demonstration. Fortunately the quantities involved were small, but safe disposal (in a sink full of water) was still dramatic.

The Ig Nobel prize is usually seen as lampooning a piece of scientific work that seems to have no relevance. I wonder if this is really true for the ’wasabi fire alarm’ (Chemistry World, Nov 2011, p22). As a person with deteriorating hearing, this piece of work immediately struck a chord with me. I do not know the details of the work, however, it seemed to me that it might well be addressing a problem not thought about by those who are not afflicted with the disability of a hearing problem. How do you communicate an emergency to such people and still allow them to retain their independence?

People with a hearing problem live with a constant and isolating communication problem of which most others are blithely unaware. I live in a fire prone country and I am always being warned to listen out for broadcasts, fire sirens and warnings by telephone and radio. I also live with the problem that motorists think that blowing a horn, rather than slowing down, is an adequate warning to someone acting injudiciously in navigating the streets.

I would like to hope that this research means that some people are thinking about problems of this nature. If so, I am sure they could do without being lampooned for their efforts.

Having read the article ’Sodium and water’ by David Jones (Chemistry World,  Dec 2011, p80) I wish to express the following view. It takes a dismissive attitude towards laboratory explosions, notably in its statement ’Explosions are always fun’. The same issue of CW has an account of an explosion in a university chemistry lab (p11) which was anything but ’fun’.

Perhaps it can be assumed that a member of the RSC will assume that David Jones’ article was written in a humorous spirit and not be misled by it. There are many schoolteachers among the RSC membership and obviously copies will find their way into school libraries. Imagine a school pupil acting on the advice that ’a big enough chunk of sodium, thrown into water from a safe distance, should explode’. How will he or she gauge a ’safe distance’?

When I add a few drops of my homemade red wine to a few millilitres of tap water, the result is a blue solution. Why is this?