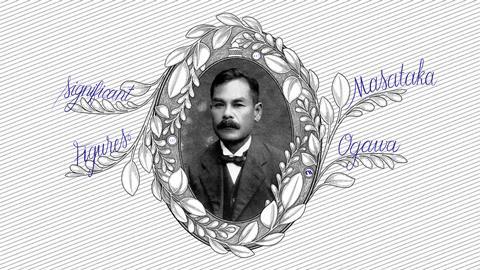 Masataka Ogawa and the search for nipponium

Could a Japanese scientist, whose claim to have discovered an element was dismissed, been right all along? Kit Chapman investigates

Masataka Ogawa’s name is not widely known outside Japan. Yet almost 100 years after his death, his legacy remains a controversial point for a nation that was, at the time, attempting to establish a scientific foundation that would eventually see it become one of the premier research hubs of the world. In 1906, Ogawa may have discovered an element – but it might not have been the one he thought.

Ogawa was never destined for science. He was born in what is now Tokyo, Japan, in 1865, into the samurai caste in the last days of the Tokugawa Shogunate and grew up on the island of Shikoku. During his childhood, the Boshin War resulted in power transferring to the Imperial court and Japanese opening up to western influences. Thus, when his father died, Ogawa left the way of the warrior and decided to study chemistry, with his time at Imperial University (now the University of Tokyo) sponsored by a local feudal lord. He became one of Japan’s first scientists, studying under the British experimentalist Edward Divers but, unable to afford to continue research after his sponsorship ended, he soon left academia and became a secondary school teacher.

In 1908, he claimed to have discovered the missing element 43 – but nobody could replicate his results

Yet Ogawa never lost his passion for chemistry. For the next decade he saved his money and was eventually able to fund his return to university as a 31-year-old postgraduate. Eight years later, in 1904, the Japanese government paid for him to travel to the UK and work in William Ramsay’s lab at University College London. His timing was perfect: the same year, Ramsay won the Nobel prize for his discovery of the noble gases. Ramsay had obtained 250kg of thorianite (ThO2) from Sri Lanka, from which he planned to obtain helium – not commercially available at the time – through radioactive decay. Ramsay gave Ogawa a sample and asked him to investigate the mineral for new elements.

Ogawa was tireless in his attempts to prove himself to the Nobel laureate. At the time, Japan was at war with Russia, and Ramsay would often joke with his new lab partner ‘Which will be sooner, your success in discovering a new element or the Japanese army’s victory at Port Arthur?’ Soon, Ogawa precipitated out an unidentified hydroxide and detected x-ray spectra that did not match any known element, but he was unwilling to publish his finding until he’d determined its position on the periodic table by measuring its atomic weight. Obtaining more thorianite, he stayed in England until August 1906, before returning to Japan with his own samples, where he discovered the same spectra in reinite (FeWO4) and molybdenite (MoS2). In 1908, he published two reports in Chemical News, claiming to have discovered the missing element 43; on the suggestion of Ramsay, he chose to name it after the Japanese word for his homeland: nippon.

Nipponium was celebrated around the world as the first element discovered in Asia. ‘The significance of the discovery is that it was about 40 years after Japan first encountered western science,’ explains Yoji Hisamatsu, curatorial division chief at the Ehime Prefectural Science Museum in Japan. ‘The discovery of new elements could be said to mean that Japanese chemistry had caught up … it was highly acclaimed, and it gave confidence and courage to [Japanese] scientists at the time.’

Ogawa’s claim was initially recognised in British, American and German journals, and nipponium began to appear on the periodic table in position 43, filling one of the last gaps in the chart. Ogawa became a national hero in Japan and was appointed president of Tohoku University from 1919 to 1928.

But nobody could replicate his results. Based in Japan, Ogawa himself lacked the latest equipment, and his most important results were published only in Japanese – leading to them being missed or incorrectly cited in the West. In 1925, chemist and future Nobel laureate George de Hevesy stated that crystals supposedly containing Ogawa’s nipponium was ‘composed, essentially, of zirconium silicate having a content of 2% of hafnium’, which overlooked the fact that Ogawa had detected his element in other samples, and that Ogawa had discussed the crystals in another paper. In the same year, Walter Noddack, Ida Tacke (later Noddack) and Otto Berg also claimed the discovery of elements 43 and 75, although they were only recognised for the latter, which they named rhenium. Unable to defend his findings so far from the centre of scientific publishing in Europe, Ogawa’s claim for element 43 lost its recognition. By 1927, even Japanese publishers of the periodic table had dropped all mention of nipponium.

Ogawa’s work was forgotten for half a century

Ogawa continued his work, looking to improve his detection techniques with the purchase of a new x-ray spectrometer. Yet it wasn’t to be; within a week of the new instrument becoming operational in 1930, Ogawa collapsed in his laboratory, and died of gallbladder disease three weeks later. He left behind 10 children, three of whom had become scientists. Ogawa’s second son, Eijiro, a professor of engineering at Kyushu Imperial University, attempted to continue his father’s search, but died unexpectedly before he could publish his results. By then, Italian scientists Emilio Segrè and Carlo Perrier had discovered the real element 43, which had been synthesised by accident in a particle accelerator at the University of California, Berkeley, US. The element, technetium, was so radioactive and unstable it couldn’t possibly have been Ogawa’s nipponium. Japan’s first element seemed destined to be one of the also-rans of history; even its proposed symbol, Np, was repurposed for the newly synthesised element 93, neptunium.

Ogawa’s work was forgotten for half a century. Then in 1996, Japanese radiochemist Kenji Yoshihara began to investigate his claims, armed with Ogawa’s lab notes, oral histories from his colleagues who had seen the x-ray spectra of the samples, and original equipment and reagents supplied by his family. Perhaps, Yoshihara suggested, Ogawa had made the same mistake as the Noddacks: nipponium had been element 75 all along.

The evidence soon began to mount up. Over a decade, Yoshihara found that the chemical reactions described by Ogawa in his notes would lead to ReO4+; the emission spectra of his element had its strongest peak at 4882Å, compared with rhenium’s 4889Å; and Ogawa’s samples show peaks corresponding to rhenium.

The evidence for nipponium being rhenium is indisputable, argues Hisamatsu. Ogawa’s skill, he explains, was in experimentation, particularly separating trace amounts of rare element compounds from ores. ‘His weakness was that he was not capable of organising a team with the necessary expertise to verify nipponium. It was the x-ray spectroscopic analysis that ultimately determined discovery … this was difficult and time-consuming for a few old-fashioned chemists to tackle alone. If he had brought in more colleagues with various expertise, and lobbied early on to measure the nipponium samples with the latest technology, the global evaluation might have been different. His research in the distant Orient was clearly at a disadvantage for introducing the latest experimental techniques, and he was not able to publish additional papers to solidify his recognition.’

The evidence that was being touted was extremely flimsy

Hisamatsu does not suggest rhenium should be renamed, but he does believe that the element’s priority should be amended. ‘Masataka Ogawa should leave his name in the history of chemistry as one of the discoverers of element 75,’ he argues. ‘There are other examples in which element names by prior discovery were not adopted … it’s an important role of the historians of chemistry to identify and report how and by whom these elements were discovered.’

Although the nipponium/rhenium theory is popular in Ogawa’s native Japan, not everyone is convinced. Eric Scerri, a lecturer at the University of California, Los Angeles, US, researched the case for Ogawa in his book, A Tale of Seven Elements. ‘I reached the conclusion the claim was bogus,’ Scerri says. ‘The evidence that was being touted was extremely flimsy, and some of it was more about the reputation of various scientists rather than the element that had allegedly been discovered.’

Yet even if Ogawa’s discovery remains in doubt, the influence this samurai chemist had on Japanese science – both as a researcher and as an inspiration to follow in his footsteps – is undeniable. In 2016, the particle accelerator team at Riken in Wako, Japan, were recognised as the discoverers of element 113, and chose to name it after their homeland. Unable to use nipponium due to Iupac rules against repeating element names, they used the alternative Japanese word, nihon, instead. ‘Discovering an element was a dream from Japan’s history,’ Riken director Hideto En’yo, recalled at the time, referencing Ogawa. ‘For Japan, this has been a century-long project.’

In nihonium, Asia had discovered its first element – and Ogawa’s dream was finally realised.

Kit Chapman is a science writer and lecturer at Falmouth University, UK