Pfizer’s prospective bid for AstraZeneca (AZ) has made a lot of headlines (Ed. Pfizer ended up withdrawing as AZ refused to entertain the offer). I have no way of knowing how the story will play out in the long term (although I know which way I would bet). While there’s little point in talking about the specifics of this particular deal, there is a good deal to say about drug company mergers in general.

The first thing to realise is that a merger (or acquisition) is a business deal, and is made for business reasons. Someone is looking to make more money than they would make without the deal. This will be accomplished by bringing in more while spending less. All the talk of research cultures, of pipelines, of synergies and assets is ancillary to that main point, although some of it is more relevant than the rest. 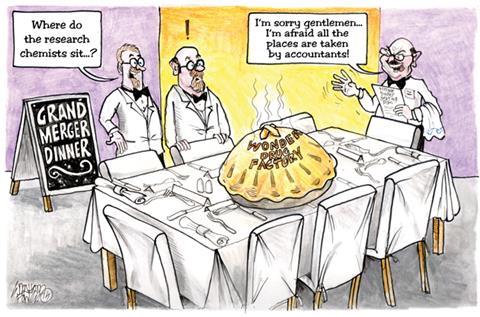 The main concern is with the assets of the company being acquired, and by assets one means ‘real things that could be sold right now if need be’. Drugs that are currently on the market are paramount, ranked strictly by market size and their remaining patent lifetimes. The values of all the other compounds drop off steeply the further away they are from regulatory approval (which is only fitting, given what can happen to these candidates even late in the game). A bird in the hand, in this business, is worth far, far more than two in the bush. A potential gigantic blockbuster is no mean thing, but many are the potential blockbusters that haven’t quite made it all the way to market.

It’s probably safe to say that no drug company makes a big acquisition if it feels calm about its own financial prospects. These deals are made out of a combination of fear and greed (the same two emotions that drive the financial markets in general), but fear has to be number one. There is the fear that the company’s own portfolio faces too many patent expiries, fear that its research pipeline is too thin and its uncertainties too great, and fear that while company X, off in the distance, has assets that might mitigate these problems, someone else might be making a bid for them tomorrow. Act now!

It may be all too clear that I haven’t yet mentioned the R&D that will be performed by the newly merged company. I really think, though, that this is quite far down the list of concerns for the actual dealmakers. The scientists in the labs almost invariably go through a long period of disruption and uncertainty as they face reorganisations, site closures and job cuts. Productivity inevitably takes a beating. As they endure all of this, many people might wonder how upper management could not have seen this coming.

The answer, I think, is that they may well have seen it all coming and they did not care. The benefits of R&D, particularly its earlier stages, are in the long term. But big mergers and acquisitions are not done for the long term at all – they’re done to solve problems that are looming right now. Whatever upheavals the new company goes through will just have to be sorted out in good time, because the key parts of the deal are those immediately realisable assets and savings.

Unfortunately, such savings are often realised not by mysterious ‘synergies’, but by good old-fashioned cutbacks. Those take effect almost as quickly as new revenues do, but cutbacks are a sure thing, while those new revenues may or may not appear. Budget cuts show up on the books as instant medicine for the bottom line. For these reasons, never have I heard of a big merger without some big cutbacks as a sequel, and I doubt if any of us will ever see one. From an accounting perspective – and remember, the whole thing has to be seen from an accounting perspective – things have to be cut, or what was the point?

None of this is particularly attractive to a scientist (or to many others besides the top brass). Much of what we find important turns out to be buried in the footnotes – minor considerations and side issues. But I’m afraid that this is the world in which mergers and acquisitions take place. Its inhabitants call it ‘the real world’, but between you and me, I hope that they’re not completely right.