Dylan Stiles loves his solvents like children - even the naughty ones

Dylan Stiles loves his solvents like children - even the naughty ones

Organic synthesis uses a myriad rainbow of chemicals. My bench is littered with bottles of feedstock starting materials, exotic transition metal catalysts, and a multitude of vials with cryptic little hexagons and letters scribbled on them. Of all these, no chemical is more pervasive than solvents, the lifeblood of synthetic chemistry. I’ve come to be intimately familiar with many of these liquids. Without peeking at the chart next to my desk, I can quote the boiling point of 1,4-dioxane and a half dozen other ethers to within a degree. This is, of course, a great conversation starter at parties.

More importantly, I know exactly where to set the dial on my hotplate to get a flask full of methanol up to reflux. Residual solvent peaks in an NMR spectrum no longer require any brainpower to identify. The three spires of ethyl acetate may as well be lines on the back of my hand; an instantly recognizable blemish on my otherwise gorgeous spectrum.

The ’big five’ solvents are ethyl acetate, acetone, dichloromethane, diethyl ether, and petroleum ether. Like a television sitcom, this cast of characters each has their own personality. Think of the fruity aroma of pouring out ethyl acetate for a column, or the cool kiss of spilled acetone on a hot summer’s day. Ah, sweet memories.

The huge 20 litre blue drums that the big five are delivered in are pretty useful too. If you have a pool in your back yard, why not lash them together to make an improvised raft. Another fun game is to take empty solvent drums into the hallway, grease them up, and go Drum Curling. 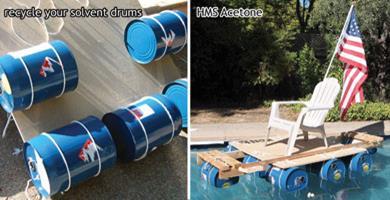 But some solvents have gotten a bad rap over the years, mostly out of toxicity concerns. Benzene stands at the top of this list. Yet I find it enchanting, in part because of its romantic history. The structural formula of benzene eluded the chemical community until 1865 when Friedrich August Kekul?, perhaps having inhaled a little too much of it, had his snake-biting dream. Prior to the 1970s, rivers of benzene flowed freely through synthetic labs. So versatile was benzene that its uses extended into hygiene - it’s good for washing your hands, and it was even sold as an aftershave in the early 1900s. But as the toxicity of benzene became clear it was gradually supplanted, and around these parts you can’t even order it without filling out special forms promising not to pour it into the sewer.

They say that toluene is the new benzene, and mostly this is true. But on special occasions - like when you’re azeotropically removing water from an acid-catalyzed ketalisation and you don’t want to overcook your sensitive material in boiling toluene - nothing fits the bill like a little C6H6. That lower boiling point can also be useful when you’re recrystallising a low-melting solid that would oil out of solution if you used toluene.

Another solvent that has been shunned by the health-conscious is hexamethylphosphoramide, the infamous HMPA. Some years ago, medical types realised that HMPA is outrageously carcinogenic, leading to the preference for safer alternatives like dimethylsulfoxide (DMSO) and N,N’-dimethylpropyleneurea (DMPU). But every reaction I’ve ever put into DMSO has turned black and given me a bad news bar code of TLC spots, and while I have had some decent results with DMPU, nothing works quite like HMPA. I’ll hang on to my toxic bottle thank you very much.

So what would my ’desert island solvent’ be? It’s an impossible question, a dilemma akin to picking a favourite child. Every solvent is a unique and special snowflake. None of them is perfect, but if you love your solvents they will love you back, and you can grow old together. Just don’t splash on the benzene after shaving.