Paul Docherty revises a reaction he never could quite remember 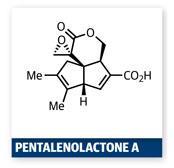 Memorising reaction mechanisms is perhaps the most loathed facet of the undergraduate organic chemistry course. What can be trivialised as a form of pattern recognition firstly requires learning a new language, with all the semantics and syntax of chemical notation. Once the prospective chemist has learned a core set of reactions and principles, extending this knowledge generally gets easier. But certain reaction mechanisms are more stubborn, and refuse to lodge in the brain. For me, one of those is the Pauson–Khand reaction (or PKR to its friends) – a cobalt-catalysed cycloaddition between an alkyne, an alkene and carbon monoxide to form a cyclopentenone.1 This is a bit unfortunate, as the PKR is a really useful reaction, but a good understanding of its nature is key to getting both a good yield and the desired product, as those three components may combine in several orientations.

One team that really gets the PKR and all its nuances is that led by Zhen Yang at Peking University in Beijing, China. They recently published a very neat synthesis of the intricate pentalenolactone A methyl ester using Pauson–Khand technology to build the core 5,5-fused bicycle.2 Their goal was a worthwhile target – the family of pentalenolactones are important members of a group of antibiotics produced by prokaryotes.3 From the off, they were aware of the complications of using a Pauson–Khand reaction as the keystone to their synthesis, particularly with heavily substituted substrates. 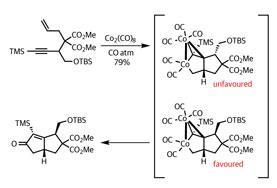 To mitigate this, the team spent some time evaluating potential substrates, and selected a suitable enyne starting point for the PKR (figure 1). The complex reaction with carbon monoxide generated their desired product as the correct stereoisomer in great yield, with the only downside being the lengthy reaction time – eight days! In this process, the team created two five-membered rings, two new stereocentres and installed key functional groups – so their diligence certainly paid off.

It wasn’t time to relax, though – their target required another two rings and a lot of decoration, so the team swiftly moved on, firstly methylating the enone, and secondly decarboxylating one of the methyl esters. They then used a remarkable domino reaction process developed by Richard Taylor to install a third ring, taking advantage of a small phosphonate sidechain (figure 2).4 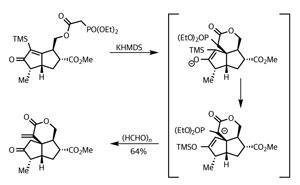 A little base deprotonated next to the phosphonate, promoting Michael addition into the enone. The resulting intermediate rearranged – the trimethylsilyl group migrating to the enol in a Brook rearrangement. This was then perfectly set for a Horner–Wadsworth–Emmons olefination with formaldehyde, returning their desired tricycle, and featuring the key exocyclic methylene. Phew!

With the two stars of their synthetic performance exiting stage left, the team was tantalisingly close to the natural product. But as we’ve often seen on this page, the functional group interconversions required to complete the route took some effort. Their first step was to methylate one of the alkenes via a modified Stille coupling of an enol triflate with the rather nasty tetramethyl stannane.

The last few steps in their synthesis were also rather awkward, but followed a similar route taken by Samuel Danishefsky in his syntheses of this family. Although all that was required was epoxidation of the exocyclic methylene, direct oxidation failed. Instead, the team used a stepwise process of reducing the enone carbonyl, epoxidation guided by the newly formed allylic alcohol, then re-oxidation to complete their target, and had to make do with the relatively low yield (figure 3). However, I’m sure that completing their target was reward enough!

So the Pauson–Khand reaction yet again proves its worth. But I’ve still no idea how it works...