Creating the coldest points on Earth

Once upon a time, had I asked whether you still played with toys, you might have felt a little insulted. Toys, after all, are things for children to create fantasy worlds (think dolls, teddy bears and Lego) or tools for games and exploration (think kites, roller skates, snorkels or water pistols). But adult delight in gadgets is nothing new – in 1887, William Ramsay wrote of going to the lab ‘on a bicycle’ with palpable excitement – and today we are less embarrassed by the fun that toys bring. 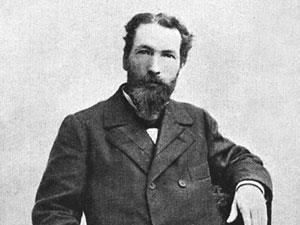 To me, cryogenics are the supreme toy in a chemical laboratory; extrovert substances that never cease to delight. Their preparation was both a technical triumph and a milestone that heralded the beginning of real low temperature science.

Raoul Pictet was born to a minor branch of the Pictet family, best known for its exclusive private bank in Geneva, Switzerland. Pictet studied at local schools and then joined the faculty of science. A top student, he soon moved to Paris, first to the École Polytechnique and then to the Sorbonne where he worked with the chemist Charles Adolphe Wurtz.

Pictet was interested in thermodynamics and thermochemistry, but for their commercial, rather than chemical, potential: he built a machine capable of producing 15kg of ice per hour. With a patent under his belt, he became secretary to the writer–archaeologist–collector Gustave Reviliod and went to Egypt for the inauguration of the Suez Canal.

Egypt was a dream location. If nothing else, it was crying out for ice. He made contacts rapidly and at 26 was appointed professor of physics and mechanics at the University of Cairo. He soon caught the attention of the Egyptian Khedive, who gave him the task of redesigning science education in the country. Pictet also won a lucrative contract to supply ice machines to the government. Both tasks were massive and in 1875, exhausted, Pictet returned to Geneva.

Here he returned to practical thermodynamics; his detailed measurements leading to a paper showing the relationship between latent heat of vapourisation, molecular weight and absolute temperature. The same relation would be rediscovered by Frederick Trouton in England six years later. But Pictet’s real focus was liquefying gases. It had become clear through the work of Michael Faraday and others that most gases could be liquefied by cooling or pressure, or by a combination of the two. But six crucial ‘permanent’ gases stubbornly held out: hydrogen, helium, nitrogen, oxygen, nitric oxide and carbon monoxide.

Pictet expressed five requirements to liquefy a gas reliably. The gas must be of exceptional purity and the apparatus must compress the gas to very high pressures. The temperature must be as low as possible, with excellent insulation (he would use cotton wool), and the gas must be expanded onto as large a cold surface as possible to ensure condensation.

Pictet convinced a local instrument maker to give him free access to his workshops and they built a device consisting of three stages. First, sulfur dioxide, liquefied under pressure, was pumped and evaporated in a closed circuit system. This dropped the temperature to –75°C, sufficient to liquefy carbon dioxide under relatively modest pressures in the second stage. Extreme care was required – turning stopcocks too fast risked pressure surges that would lead ‘to a deplorable accident’. Evaporating the CO2 then brought the temperature below –120°C.

At this point, oxygen, prepared in situ in a sealed vessel by thermal decomposition of potassium chlorate, was released into the chamber through a fine nozzle at a pressure of several hundred atmospheres. It liquefied instantly, condensing as pale blue droplets. Always a good thermodynamicist, Pictet hastened to point out that the mechanical work provided by the SO2 and CO2 pumps were the ‘productive cause of the cold’.

Thrilled with his achievement, Pictet cabled the Academy of Sciences in Paris just as Louis Paul Cailletet was about to announce his own approach to the same thing. They agreed on joint priority and were lionised across Europe. The news travelled fast: Karol Olszewski and Zygmunt Wroblewski in Warsaw and James Dewar in London soon took temperatures even lower and, in 1908, Kammerlingh Onnes apprehended the final ‘permanent’ gas by liquefying helium.

Pictet remained in academia for some time, but then quit to pursue business in Germany. He was plagued by patent disputes and poor business decisions. He would later claim that the laws of thermodynanics did not apply to his refrigerants. He died, in Paris, almost forgotten.

When Aldous Huxley said that speed was the only modern emotion, he was hinting at the thrilling pleasure of danger. By liquefying the components of air, Pictet and Cailletet opened the gates to a whole new playground, with chefs like Ferrán Adria and Heston Blumenthal its latest explorers. If you work in a lab, stop for a moment, fill a Dewar with liquid nitrogen and spend a few minutes making peace with your inner child.