My first time judging a poster competition will also be my last. It was on the final day of a conference for fledgling chemists and I’d been drafted in as an emergency replacement when the proper judge couldn’t make it. There were no real guidelines on how to pick a winner, except a sort of judging bingo sheet to stamp categories such as ‘content’, ‘appearance’ and ‘discussion’ between 0 and 10 (though what was a 10 and what was a 0 was left decidedly opaque). All I could do was take to the hall and begin to work my way around some 60 PhD students and postdocs, each stood cheerfully next to their research. 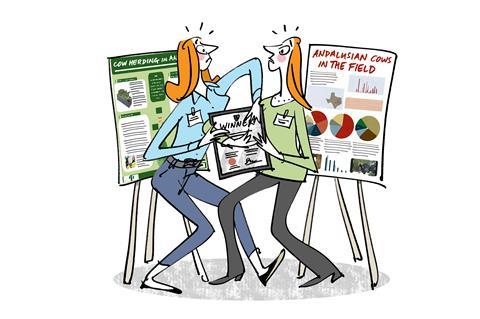 The situation was made worse by the problem that half the posters were in a discipline I was utterly unfamiliar with. As the presenters explained their rationale, I could only nod sagely and mutter vague replies such as ‘how does this extend the field?’ or ‘does it have any practical applications?’. Occasionally two (or three, or four) posters would be from the same group, and on such similar topics I could only favour whoever had the nicest pictures and didn’t rely on a font resembling comic sans.

Two hours later, voice and feet a little sore, I’d more or less put together a top five. Some poster presentations were just damn impressive, a mix of confident explanation and clear presentation that elevated them into a shortlist hastily cobbled together in my frazzled mind. Eventually, I narrowed my list down to two and consulted the other judges. I sighed with palpable relief. They had both gone for one of my choices, and gave a sort of ‘hmm, good pick’ mutter for the second. We had a clear winner. I was on the home stretch. All I needed to do was wait until the end of the conference, announce the judge’s decision and walk away.

The presentation began well. ‘Our runner up is…’ A ripple of applause, an awkward photo op and one cash prize had been doled out. Relief. This was easy. I bloomed with confidence as a lecture hall filled with hopefuls looked on.

‘And our overall winner is…’ I dropped in a pause to increase the excruciating tension. ‘Victoria Winsalot!’ OK, she wasn’t quite called that, but it certainly wasn’t a common name. Imagine my horror when two Victoria Winsalots rose from their respective seats. Both women noticed each other and froze, the audience’s applause fading into silence at the surprise research-related standoff. Half the crowd looked at them. The other half looked to me. Who would claim the oversized cheque and palm full of book vouchers?

Would we have to settle the right to be Victoria Prime with gladiatorial combat?

‘From the University of…’ I quietly congratulated myself on noting the victor’s institution. That should sort out the problem, I thought. It didn’t: both women remained standing, glancing at the supposed imposter with intense confusion. They were both from the same university, a good 500 miles (and a different country) away from where the conference was being held.

The situation was getting ridiculous. ‘For her work on…’ I tried to remember the title of the poster, failed, and instead picked up on its broad themes. Sweat trickled down my brow. ‘Uhm… cow herding in Andalusia.’ Again, details have been changed to protect the innocent, but it was a niche field in agricultural chemistry, something that could only have a handful of experts in the world.

Both women remained upright, resolute that they had the winning poster. Confusion had passed through incredulity and now slipped into full-blown horror, as though they had just encountered an evil twin or an intruder from a parallel universe. I had no idea what to do. My mind started coming up with ridiculous scenarios. What else did they have in common? Did they keep getting each other’s mail? Would we have to settle the right to be Victoria Prime with gladiatorial combat?

Eventually someone found the winning poster’s number and the correct Victoria came down to the muted claps of a baffled audience, the anti-Victoria sinking back down in defeat. Afterwards, as the conference gathering petered away, I headed over to the duo, now standing next to each other and giggling about the whole mess. Same name. Same university. Same area of interest. They had never met before or even heard of each other’s research. ‘Small world,’ they laughed, awkwardly in sync.

To this day I don’t know if it was a wind up; I can’t say I’m up enough on the field of Spanish cow herding to check. But next time I’m asked to mark posters, the answer will be a firm no; one Victoria Winsalot is more than enough for a lifetime.