Putting chemistry back in biology

The chemical nature of biomolecular interactions can no longer be ignored

Biochemical pathways are famously complex and interconnected, so it’s no surprise that depictions of them have to be simplified. Even so, many of these diagrams are outright terrifying in their complexity. Circles and triangles get connected by lines (solid and dotted), arrows point towards larger and smaller polygons of different tints. There may well be no other way to get any mental picture at all of these things, and everyone realises the limitations of such diagrams. As tangled as they might get, they often don’t do a good job of representing temporal effects, changes in transcription, the various kinds of allosteric interactions and many other factors. But there are other negative effects of these illustrations that are not so obvious. 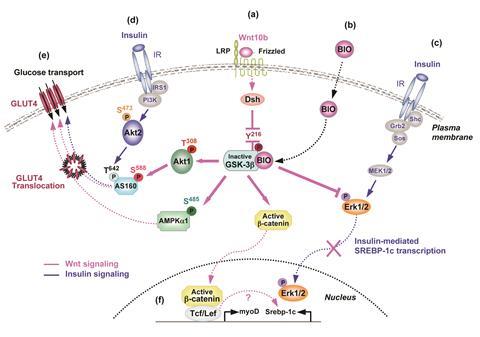 Chief among these (to my mind) is the way that such cartoons allow the viewer to forget that they represent actual chemical species, and that all those lines and arrows are attempts at shorthand for real physico-chemical processes. There’s room for an abstract view of these systems, but in the end, what’s going on is not abstract at all. Covalent bonds are being made and broken, hydrogen bonds and nonpolar interactions come together and peel apart, nucleophiles and electrophiles do their timeless dance. It’s chemistry exactly as we chemists understand it; the only difference is that it’s happening with larger, more structurally complex molecules than we’re used to. There is nothing magical about a protein, a polysaccharide, or an oligonucleotide. They’re molecules, and they should be treated that way. To think otherwise is to allow vitalism to creep back into chemistry.

Increasingly, molecular and cell biologists have been coming to terms with the fact that you can’t just (for example) decide to label some protein with green fluorescent protein (GFP) and expect it to carry on as before. Putting a star next to its name on the whiteboard, or renaming it ‘Target–GFP’, doesn’t capture what’s really going on. You have created a new protein, and this new protein has a new shape, a new size, and quite possibly new behaviour entirely. The same goes for all protein conjugates and for chemical biology probes in general. It is very, very hard to observe living systems at the molecular level without perturbing the very things you’re trying to see, but a great deal of effort is now going into trying to minimise these effects.

Analytical chemistry, with advances in x-ray techniques and cryo-electron microscopy, has revealed more and more detailed structures of not only individual biomolecules, but entire protein complexes. Seeing the transcriptional machinery of the cell or the helices of a G-protein coupled receptor at the resolution that we now can achieve leaves us with no choice: we must not only consider their components as molecular species, but also realise that their behaviour can turn on surprisingly subtle structural changes. Individual functional groups can have huge effects when they’re at the fulcrum of a binding surface, and that takes the whole endeavour into the territory of organic chemistry.

There is nothing magical about a protein, a polysaccharide, or an oligonucleotide. They’re molecules, and they should be treated that way

This process will surely continue. All of these technologies are still improving, and others (perhaps atomic force microscopy or one of its many variants?) will be added to the list of ways that we can appreciate the structures of biomolecules at unprecedented levels of detail. These advances may well have the effect of turning molecular biologists (slowly) into chemists, although I’d be willing to bet that this isn’t how most of them are viewing the process! But if you find yourself thinking about molecules in terms of their three-dimensional structures, and their individual functional groups, I’m hard pressed to see how you aren’t some sort of organic chemist.

Welcome to the club! Not to fear – you’ll find that, in many ways, organic chemists are like biologists. Our experiments fail in different ways, but fail they do, and we use language just as colourfully when that happens. I believe that the same rule of never turning down free food at seminars and conferences pertains in both fields, and the dress codes don’t seem to differ much, either. Embrace the change – you have nothing to lose but your circles and triangles.