Knowing a drug’s exact biochemistry has never been a prerequisite for approval, says Derek Lowe, and nor should it be 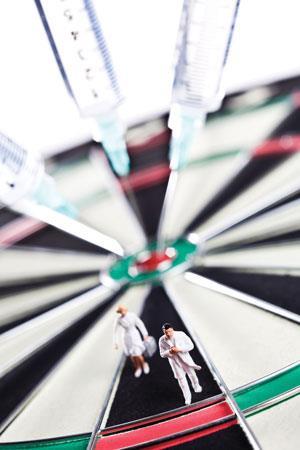 Phenotypic screening has recently seen a revival in popularity. This technique assesses drug candidates first by their effects in some organism, then works back to their causes. It can be an effective strategy, but when you find some interesting results, the need to explain them can become acute.

You might think that this would have to be done before submitting an application for regulatory approval. After all, everyone needs to know how your compound works, don’t they? But it’s not so.

What the regulatory agencies really care about are safety and efficacy. If you can demonstrate those convincingly enough, that’s enough to get a drug approved. (It should be noted in passing that the word ‘enough’ is doing quite a bit of work in that statement!)

There is, in fact, no requirement that a new drug’s mechanism of action be known at all. Target-based drug discovery, the dominant mode of research for the last 30 years or so, has obscured this, but exceptions abound.

Take the case of metformin, a widely used drug for type 2 diabetes. That one made it to the clinic, through extensive trials, past the approval hearings, and all the way through a long and profitable patented lifetime (and into a strong generic afterlife) without its mechanism being known. Even now, the arguments continue, although a particular kinase enzyme seems like the strongest candidate.

The peroxisome proliferator-activated receptor-? (PPAR-?) ligands, also for diabetes, were well into Phase III trials before anyone convincingly identified their molecular targets – until then, they were just a class of structurally related compounds that lowered blood sugar somehow.

More recently, Schering-Plough’s cholesterol absorption inhibitor, ezetimibe, made it to the pharmacy shelves well before its target could be worked out. When asked for the details at the time of approval, the best the company could do was that the compound seemed to target some sort of transport or uptake protein in the gut wall, but could offer precious few specifics about just what protein that was.

But this lack of information didn’t stop anyone from approving either drug. That’s because their effects were manifest for the main biomarkers of their therapeutic classes (lower blood sugar and lower cholesterol, respectively), and their safety profiles had been established.

This doesn’t mean that people weren’t working to find those targets, of course. Whatever such compounds might be hitting, it’s by definition important and useful, and it’s validated in the best way a target can be: with human trials and a marketed drug. Those are the sorts of puzzle pieces everyone loves to fill in, and who knows what else that knowledge might lead to? It’s good to know where a new drug fits into the grand biochemical scheme, and those details could even help the sales force differentiate the drug from competitors’ products.

These points highlight the case for running phenotypic screens in general. You may well (with luck and effort) find pathways and targets that were either unknown or unappreciated – things you wouldn’t have known to screen for in the first place – and bring them into the light with a compound you know is active.

The difficult part, as you might expect, is setting up a really useful phenotypic screen in the first place. The choice of organism and the ways in which you read out the effects of your compounds are crucial, and these are real barriers in many therapeutic areas.

Starting with a defined target would seem to remove a lot of uncertainty from the process, and that’s just the sort of thinking that led to the rise of this entire school of drug discovery. But, over the years, a surprising number of what seemed (at the time) to be can’t-miss drug targets have met with efficacy failures in the clinic. It’s become clear that ‘de-risking’ drug research is a lot harder than it looks. There are also cases where a working drug was found, but was later discovered to be working, partly or completely, through mechanisms that weren’t even known at the time. The statin drugs for lowering low density lipoprotein cholesterol are a good example of this – more appears to be going on with them than inhibiting their main target would seem to be able to explain.

In that sense, every drug development programme is at least partly a phenotypic one. It’s just that in some of them, the organism being used is a costly two-legged one that appears rather late in the process. In the same way, many more compounds than we might think have also gone to market with an incomplete profile of their mechanism, no matter how they started out or what banner they marched under on their way to regulatory approval.