The windings behind the cult icon 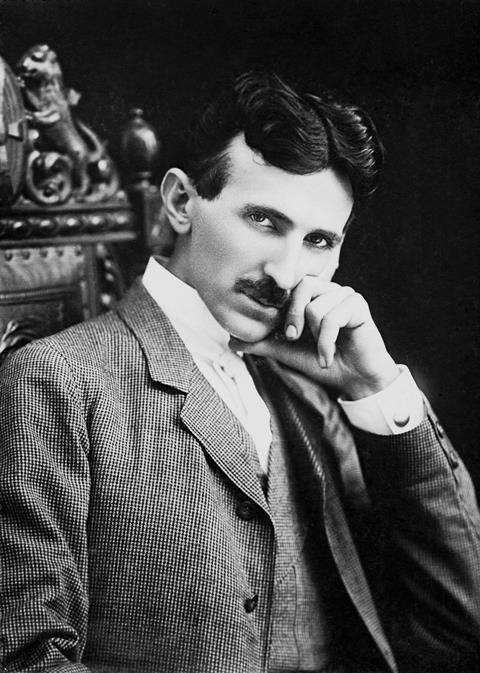 The invasion of Ukraine and the sharp increases in the price of energy have suddenly focused everyone’s mind on the flows of heat and electricity in our buildings. In my department, a good proportion of the 500kW of electricity that pours through our building at any given moment drives myriad motors that maintain the vacuums we need, our air quality and our movements through the building. It is a truism to say that without electricity, modern chemistry would cease.

There is one figure – not a chemist at all, but a mould-breaking inventor – who spans the transition from steam to electricity and transformed how we do much of our science. Thousands of pages have been written about Nikola Tesla, whose brilliance and eccentricity have given him a cult-like following. Many of the anecdotes about his life originate from his own memoirs. It can therefore be difficult to trace the course of his inventions without veering into hagiography. After all, his name is associated not only with an instrument, the Tesla coil, but also with one of the key units of magnetic field, and with a company that has (ahem) turbo-charged its way onto the automotive landscape to become one of the world’s most valuable brands.

In a curious parallel to several of the tech entrepreneurs of Silicon Valley, Tesla had a chequered academic history. He got the bug for electricity as a teenager when he seemed something of a prodigy, yet he failed to finish his university courses. After pottering about as a reluctant draughtsman and teacher, Tivadar Puskás, the inventor of the telephone exchange, hired him as his chief electrician at his new company in Budapest. But the ambitious Tesla had itchy feet; the well-connected Puskás found him a job with the Edison street lighting company in Paris. He became a key troubleshooter for the company, helping to design improved dynamos and to untangle difficult problems across Europe.

In 1884 he headed to New York, US, to work at Thomas Edison’s now-legendary Machine Works, which was laying out the streetlights and electricity generation in the city. Within six months, Tesla had quit and struck out on his own, setting up a company to make arc lights and to develop his ideas for the use of alternating currents. When Tesla’s initial venture flopped he lost control over his patents and was forced to make ends meet with a series of trivial jobs.

Tesla set up a new partnership, the Tesla Electric Company, in 1886. His mind was firmly on AC, which he probably conceived of primarily in terms of phase. Manipulating the phase of the current in a coil generated a rotating magnetic field. This field could then induce a current in a set of coils wound around a metal armature, which would be set in motion. Although Galileo Ferraris in Italy presented the principle around the same time, it was Tesla’s design that captured the market. Induction motors would ultimately become the standard design for heavy duty equipment including vacuum pumps and fume cupboard fans. 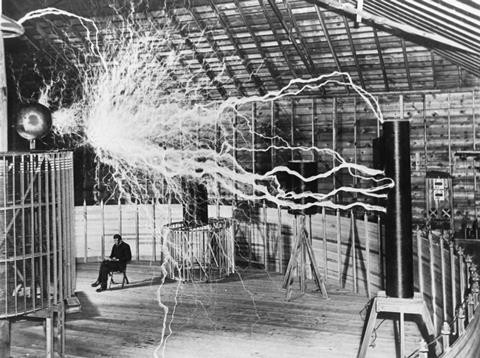 Is he a wizard? No, he’s something better – a scientist

In 1889, Tesla heard of Heinrich Hertz’s startling report that electromagnetism could be transmitted at a distance. On trying to repeat the experiment in his lab, Tesla melted the core of the Ruhmkorff coil he was using to produce oscillating high voltages. He therefore devised a resonant circuit in which the windings of the primary and the secondary coils were separated by an air gap. His device generated extremely high voltages with very little current. The second coil could be moved to vary the voltage, and the top of the coil also made spectacular sparks several centimetres or even metres long, depending on the configuration. A long exposure image of Tesla sitting in his lab surrounded by huge bolts of lightning captured the public imagination: here was a man who could dominate the invisible forces of the universe, a superposition of scientist, visionary and magician around whom legends would grow.

For chemists, the name Tesla remains intertwined with high-vacuum manifolds – the tip of a small Tesla coil brought up to the glass gives a glorious pink-purple discharge, the intensity of which correlated with the pressure achieved by the pump. Pinholes left by faulty glassblowing are instantly revealed by a bright white corona discharge around the spot, signalling the need for a bit more work to heal the flaw.

Not many Tesla coils, euphemistically sold as ‘Vacuum testers’, have survived in working order. The exposed high voltage tip makes most people nervous as it gives a disagreeable tingle when your fingers get in the way. But the internet is packed with designs. There are few devices that combine wonder and danger so exquisitely. Build one for yourself and your children, to experience that Tesla magic.