Jacobus Henricus van ’t Hoff won the inaugural Nobel prize in chemistry for discovering the laws of chemical dynamics and osmotic pressure in solutions. Like August Hofmann, whom you can read about in our recent feature on Germany’s influence on chemistry teaching and research in Britain, van ’t Hoff spent part of his career at the Friedrich Wilhelms University in Berlin. Nowadays van ’t Hoff is better known for his contributions to stereochemistry. The Dutch chemist was only 22 when, in 1874, he postulated the asymmetric tetrahedral carbon atom. That same year, French chemist Joseph Achille Le Bel independently hypothesised similar ideas about molecular architecture. Neither chemist could have foreseen that over a century later understanding the three-dimensional shape of molecules would be so crucial. 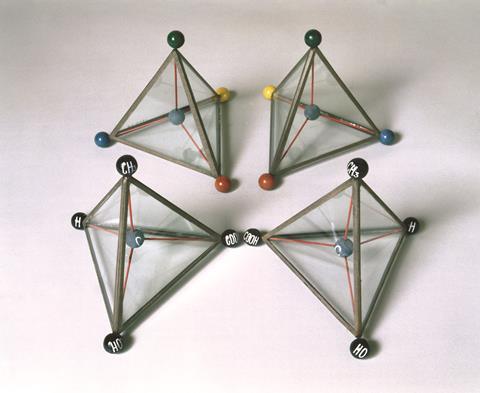 Modern pharmaceutical research wouldn’t function without methods to determine the structures of complex molecules. Nuclear magnetic resonance (NMR) spectroscopy is the go-to tool for deciphering organic structures, especially those that won’t crystallise. But interpreting NMR data is still error prone. In natural product research, scientists regularly end up revising large, complex organic structures when they eventually synthesise the molecules and find that the spectra don’t match. Yet again that’s the outcome of the research we covered in August when Varinder Aggarwal and colleagues at the University of Bristol, UK, were trying to synthesise potential antibiotic lead molecules found in marine bacteria off the coast of Costa Rica. On one hand, the connectivity in the originally proposed structures was correct, on the other their 3D shape was competely wrong. That’s stereochemistry for you.

But complex problems spawn creative solutions. First, Aggarwal’s team combined computational modelling and NMR spectroscopy to narrow down the 128 possible isomers for each molecule to just four. From there, the team quickly synthesised a mixture of the four isomers, with each isomer in a different proportion, that they could analyse to identify the correct isomer. Researchers facing similar problems could unpick the 3D orientation of the bonds and groups in other complex organic structures with this method.

Earlier this year we covered another NMR technique for sussing out ambiguous structures. The technique adapted a method more commonly used in protein studies to authenticate proposed structures, or pick the right candidate from several possible ones. It worked by constraining the molecule of interest within a polymer gel to yield extra coupling and chemical shift data.

Van ’t Hoff, Le Bel and their contemporaries recognising such a subtle yet fiddly notion was game-changing. Today, visualising molecules as 3D objects is secondary school chemistry. Makes you wonder about the shape of things to come.