Is the comparison between chemistry and cooking really an insult?

This month, as I enjoy the culmination of another series of Great British Bake-Off on the BBC, I’m reminded of the parallels between chemistry and cooking. Some might intend the comparison as an insult, but today most of my chemistry and experimentation does go on in the kitchen and I see no shame in that. Indeed, I once heard the brilliant description of the head of the lab being much like a head chef. For those who want to understand how a research lab functions, the analogy of a professional kitchen works quite well with various levels of chef, or researcher, all working under one person, who will check over everything before it goes out to the public. Sometimes, of course, that system fails (see p8), but in both cases it is, or should be, the chef at the pass who is held responsible. 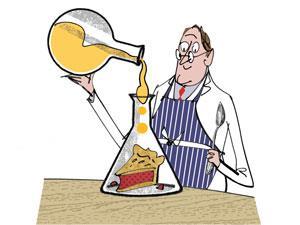 But what of the home bakers like me, the solo scientists who experiment, tweak and improve their recipes and get a delicious reward at the end? Perhaps we should appreciate the illustrious history and chemical pedigree of some of the ingredients that sit in our store cupboards. Who knows, for example, that as well discovering the important role of nitrogen in fertilising crops, Justus von Liebig, founder of the first major school of chemistry, is responsible for the stock cubes that we use every day. Liebig, in collaboration with engineer George Giebert, developed a way to produce a beef extract from carcasses and founded the Liebig’s extract of meat company.

The original product was a meaty spread of reduced meat stock and salt. A cheaper version of the product was later named Oxo, now synonymous with stock cubes and gravy. Some people also credit Marmite to Liebig because he discovered that yeast could be made into a concentrated food product that was similar to his meat extract. Marmite is a British version of that extract made from the brewers yeast. Although now, both Oxo and Marmite are owned by the multinational Unilever.

Back with baking, Liebig is also linked to the simple pot of baking powder as it was a former student of his, Eben Horsford, who first made the ubiquitous raising agent.

Horsford studied with Liebig at the University of Giessen for two years, looking at the nutritional content of different grains, before moving to Harvard University’s nascent scientific school and continuing his research into the chemistry of nutrition and the search for a new raising agent. The eventual recipe used ‘pulverulent phosphoric acid’ (calcium phosphate) and sodium bicarbonate. Today other weak acid salts are used, such as cream of tartar. When the powder is mixed into a wet cake dough, acid is released, reacting with the baking soda (sodium bicarbonate) to create the bubbles of CO2 that help my cakes to rise.

Corn flour is also added to the mixture to make it moisture resistant and prevent the reaction happening on the shelf. Corn flour, of course, is another clever little ingredient for the home cook and gives endless fun creating non-Newtonian liquids that become hard when subjected to stress. Corn flour also allows sauces to be thickened and is the main ingredient in powdered custard. Alfred Bird famously invented the formulation because his wife was allergic to eggs, which are normally used to thicken custard. I myself, however, usually use a slurry of cornflour in savoury dishes, to thicken gravy for example, which takes us back to Liebig and his meat extracts.

While we might think of Liebig’s main contributions to chemistry being in the laboratory, his legacy, and those of numerous other chemists is still being felt in the kitchen. Maybe not all chemistry is cooking, unless your kitchen is a lot more kitted out than mine, but it’s not a bad comparison at all.