Dramatised by Alan Lightman, the second law of thermodynamics incorporates the theory of entropy

’The level of disorder in the world [is] rising relentlessly and irreversibly.’

Dramatised by Alan Lightman, the second law of thermodynamics incorporates the theory of entropy. As students, we are taught that entropy represents the randomness or disorder of a system and its surroundings. This increases during a spontaneous, irreversible process. A human analogy used to explain the concept portrays the act of living as a spontaneous process, time being the irreversible factor. Entropy becomes the degree of disarray within the area in which people undergo the multitude of complicated reaction cycles necessary for life. Hence it ceases to be a surprise that a room will naturally tend to become increasingly messy with time. 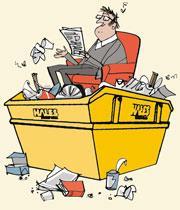 The best of both worlds?

Any tidy-freak like me will appreciate how hard it is to maintain an ordered state. If possessions are in need of tidying - like a moth to the flame - resistance is near impossible. So much energy is dedicated to the process of imposing order (any parent or lab supervisor is sure to agree) and it is unheard of to complain about the effort required to make the mess in the first place.

By putting books back on shelves, CDs in alphabetical order and colour coordinating clothes in the wardrobe, we are consuming unnecessary and excessive amounts of stored energy. Furthermore, there will be an associated increase in carbon dioxide production due to greater respiration rates compared to the non-active human. Hence, the substantial effort contributed toward maintenance of complete neatness actually contributes to global warming! The RSC Roadmap provides an insight into the chemistry required for tomorrow’s world: ’ways of reducing emissions must be found.’ The human race will achieve this by increasing the efficiency with which everyday tasks are undertaken. Anyone looking for a good excuse for having a haphazard office desk or owning a mud-caked car needs look no further.

To defend our corner, those who tidy burn off more calories per day. It is no surprise that WeightWatchers recommend cleaning as a great way to get moving and achieve something useful at the same time. On the flip side, locating an object in a systematically organised room is also a lot less energy intensive.

I am familiar with two types of chemist - the ’obsessively neat’, whose work areas are meticulously cleared every day; and the ’organised mess’, where sample flasks are piled according to some unfathomable order, and the filing system for papers spreads from desk to floor, expanding to fill the available space. Perhaps the latter have learned to make the most of both sides of the coin by allowing disorder in a structured way.

The term entropy has occasionally featured in music theory as a measure of the complexity and unpredictability of a composition. A predictable piece has a low degree of entropy, whereas one containing unexpected events has a high degree of entropy. This concept is also applied to communication systems. For example a text message containing the word ’Happy’ has low entropy if the second word is ’Birthday’. If ’Happy’ is followed by ’go lucky’ then the entropy is slightly higher because the phrase is less common. Finally, if the second word is ’bananas’ the message is significantly unpredictable and thus has the highest entropy.

Here is an example of a scientific term being incorporated into other disciplines. Or perhaps it is the other way around - maybe musicians were already considering the disorder of a piece before chemists were able to experimentally quantify the entropic properties of a system. That said, it is probably no coincidence that Boltzmann (a scientist responsible for major contributions to the investigation of entropy) studied for his doctorate at the University of Vienna, a city noted for its musical prowess.