Until a few months ago, it was hoped that one of the most remarkable sets of scientific eyes would gain an accompanying ear. Unfortunately, chance and the harsh oncoming Martian winter did for NASA’s Phoenix Lander before its MARDI microphone had chance to be activated, thus depriving us of the first proper sounds from an extraterrestrial surface. True, the Soviet Venera  probes noted the sounds of thunder as they plummeted through the Venusian atmosphere in the early 80s, and in 2005 the Huygens  probe recorded sonograms during its descent to Titan. But the Martian venture would have been a true first, albeit one anticipated by various simulations of planetary acoustics - such as Bach’s Toccata and Fugue in D minor  as ’heard’ on the surface of several astronomical bodies. 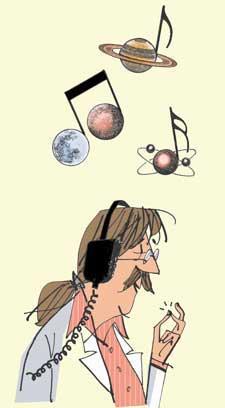 Though the subtlety of such audio effects is clearly a function of the chemical composition of the atmosphere in question, chemistry tends to play second fiddle to physics in determining the audio properties of a planetary atmosphere. The same is probably true of the high energy atmospheric shenanigans on Jupiter, the radio outbursts from which can be revealed as audio effects such as the ’woodpeckers’ and ’whales’.

But once we return our attention to terra firma, the importance of sound to chemistry (for example ultrasonic activation of chemical reactions) is clear. In addition, some unusual applications of audio have also reared their heads, and in many cases they really do add an extra dimension to our understanding of techniques and effects. Of these, few come more exotic than the efforts of Walter Bauer of University of Erlangen-Nuremberg to illustrate the FID (free induction decay) generated by NMR spectrometers during their spectral acquisitions by converting them to audio.

This technique not only allows aural verification of the processes involved, but allows some more esoteric activities, such as playing the Doctor Zhivago  theme on the spectrometer. Perfect for any NMR spectroscopist who fancies themselves to be a multinuclear Omar Sharif (and if they do requests, can we have ’Jeol House Rock’ or anything by ’Bruker-T and the MGs’?).

At the gene2music project, the aim is to transform protein sequences into music. There are worthy scientific and educational motives behind this, and an ingenious synthesis of chemical and music theory is employed to generate listenable pieces. Despite their best efforts, however, horse haemoglobin is definitely more Shergar than Chopin.

Very recently, Paul Weiss and Stephan Stranick informed Nature  readers of their technique for linking the precise disposition of the tip of their scanning tunnelling microscope to an audio output. ’Music’ is not the aim as such here, more the acquisition of an extra sense to aid the delicate manipulations and control. They even describe the ’whoook’ that accompanies troublesome atom movement as ’heartbreaking’!

So we’ve seen examples of audio emulation of chemical ’sounds’, from the microscopic, through the lab bench and up to the far reaches of the Solar System. Where next? What would be the ultimate aural exposition of a physical process? Well, it has to be the work of University of Washington’s John Cramer, who revealed the ’sound’ of the Big Bang. In his work, 100 seconds of sound serves to duplicate the first seven and a half thousand cosmic centuries. Actually, I prefer the compressed 20 second version, which is a dead ringer for the soundtrack to 50s sci-fi classic Forbidden Planet, bringing us neatly back to The Tempest. Ding-dong, bell!