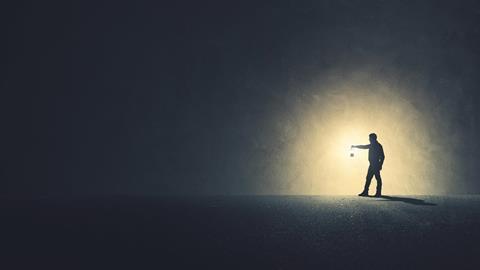 The more you know

Science has come a long way, and it’s up to us to keep it going

Last month, I visited the Diamond Light Source synchrotron in Harwell, UK. I have a particular affection for huge instruments like this, and standing next to them makes me a little giddy. Just the other side of a concrete encasement, electrons hurtle half a kilometre around a ring at almost light speed, propelled by enormous magnets under ultra-high vacuum – the language alone is dizzying. And all of it to produce intense torrents of radiation; literally shining brighter light on our world.

These facilities embody science, being both the products and source of our knowledge. They are also anthropologically fascinating; as humans have learned about matter, we manipulate it and turn it upon itself to learn more, bringing the process full circle.

The rate at which these sites generate knowledge – data, structures, papers – is exhilarating. It seems that every day you have to clamber a little further up to find a shoulder to stand on in the growing pile of giants underfoot.

The whole endeavour is so impressive that my attention is drawn to the height of the vantage point instead of the view – focusing on what we’ve achieved, and not what’s still to be done. Indeed, many of the stories in these pages are told in that manner: questions answered, rather than those still posed. So I’m proud to say we have some reminders in this issue that though we see further, much of that prospect is still but dimly lit.

As Philip Ball explores in his feature on the dark proteome, for all the protein crystal structures Diamond and its kin have added to the Protein Data Bank, there are still areas where even the synchrotron’s rays have not penetrated. Derek Lowe takes up a similar theme in his column, arguing that we should define our discipline by its voids.

This is not just a healthy attitude for science, it also guards against a potentially dangerous complacency. It’s tempting to look back at our years of progress and view discovery as an inevitability; a triumphant procession of success. Yet that risks forgetting all the effort, struggles and even conflict that have brought us to this point, and how easily it could change.

The US congress recently proposed a bill to safeguard the integrity of science and prevent the suppression of research findings. The idea that such a bill should be needed, and that a developed democracy would try to control or silence science might be greeted with the same frowning scepticism as news of a helium compound. But in the right (or wrong) conditions, they can both occur.

Freedom of speech, open discourse, transparent government, evidence-based decision making, separation of powers and all the values of liberal democracy can no more be assumed than expecting life to emerge from its component molecules. In each case, the conditions for existence are narrow. And once established, they must be maintained and nourished, or go dark and disappear.

In one sense, a synchrotron’s bright halo is a monument to how far science has come. But the people who work there tending its light, illuminating the gloom, remind me that science is full of life – and there is still so much to learn.