What are the projects that drug companies wish they’d never started?

Drug discovery has some real success stories, and you can find many accounts of these in the literature. There are papers, speeches at award ceremonies, career retrospectives when longtime researchers retire and so on. But what doesn’t get recounted in anything like this level of detail are the projects – or even the whole therapeutic areas – that the scientists involved wished they’d never heard of or thought to work on. That’s a real gap in the corpus of knowledge, because examining these programmes provides a perspective that’s missing from the Greatest Hits repertoire. After all, most clinical trials end in failure, and many projects don’t even make it to the clinic at all. 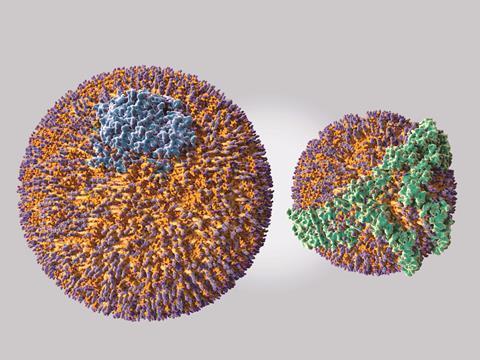 So far, every effort to harness CETP to rebalance cholesterol from low-density (left) to high-density  lipoprotein (right) has failed

Cholesteryl ester transport protein (CETP) is a classic example of a drug target that would have saved everyone a great deal of time and money to avoid. At one time, there was reason to believe that an inhibitor of its activity would be a great thing for cardiovascular disease. After all, CETP catalyses movement of cholesterol from high density lipoprotein (HDL – the so-called good cholesterol particles) to low- and very low density lipoprotein ((V)LDL, or bad cholesterol). Why not stop it from doing that and give everyone a better, healthier lipid profile?

The first problem was that, although most of the major drug companies piled into discovery efforts, every inhibitor that really worked was shockingly greasy and hydrophobic. They often came decorated with an unusual number of fluorine atoms, making them look like something you might use to produce a new type of non-stick cookware. The CETP protein wouldn’t have it any other way: its binding pocket, naturally enough, recognised only greasy blobs. These properties made clinical development a real challenge, but a bigger challenge loomed: once tested on prospective heart patients, none of the drugs seemed to work.

Pfizer’s torcetrapib was the leader in the clinic thanks to a huge (and hugely expensive) development programme, until it all imploded in a famous large-trial disaster very late in the game. Most disconcertingly, the drug treatment group turned out to be dying from heart attacks at a slightly higher rate than the control group. One after another, every other CETP program was eventually dropped: later compounds at least didn’t look as grim as torcetrapib, but while they did no harm they also did no good. Merck & Co was the last big company in the hunt – anacetrapib actually managed to show a slight benefit. So slight that Merck gave up on the whole idea, as did everyone else.

It would be a more sensible world if all such drug failures had immediate lessons about what to avoid. But it can be hard to distinguish the failures from programmes that worked

Antagonists of the CB1 cannabinoid receptor were another wipeout. The idea was that they would have the opposite effect to the agonist compounds famously found in cannabis: making people crave food less, and thus be a completely new therapy for obesity. But obesity drugs have been a series of disasters, since it’s very difficult to alter a behaviour with as much evolutionary backup behind it as eating. Several companies tried this idea out, with Sanofi-Aventis actually getting rimonabant (Acomplia) to approval in Europe – although not in the US, where the Food and Drug Administration (FDA) wasn’t convinced of its risk–benefit profile. The agency seems to have had a point: two years later, the drug was withdrawn owing to psychiatric side effects, including intrusive thoughts of suicide. As far as I know, no one has quite figured that one out to this day, and CB receptor mechanisms are still being eyed warily.

It would be a more sensible world if all such drug failures had immediate lessons about what to avoid – too rapid, too slow, too risky, too much caution, or too much pride. But while these are all certainly drug development sins, it can be hard to distinguish these failures from programmes that worked and paid off wonderfully for patients and companies alike. Indeed, if any of the above examples had worked, people would even now be writing about the lessons about determination and courage that could be drawn from their success. The Roman historian Tacitus was right: victory is claimed by everyone, but no one wants to take responsibility for failures. As an industry, we’d much rather talk about the victories ourselves. But we have more failures to deal with, and working out what they have to teach us isn’t easy – made harder when we decide we’d rather not think about them at all.