Andrea Sella condenses the story of a breakthrough in organometallic chemistry 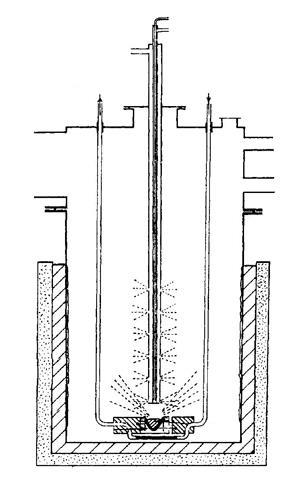 In her social history of ice and ice-cold food, Harvest of the cold months, Elizabeth David traces both the lengths to which humans have gone over the centuries to collect, transport and store ice, and the flights of culinary and artistic fancy to which it gave rise. Lavish Renaissance weddings included tables laden with ice sculptures, and sorbets exotically flavoured with bergamot and ambergris. At least some of this was made possible by the scientific observation, first in China and later in Italy, that the addition of saltpetre (KNO3), or even just salt, causes the temperature of ice to plunge.

If ice provided a delicious pleasure on summer’s day, it also provided a powerful way to preserve fresh meat and fish. Huge fortunes were made transporting ice across the globe. And the advent of refrigeration, thanks to the work of pioneers like Louis Cailletet, Raoul Pictet, James Dewar and others, opened up new opportunities for preservation.

In 1954, George Pimentel at the University of California, Berkeley, US, presented a revolutionary approach to the study of chemical reactions. Since chemical intermediates were typically too unstable to be observed, his approach was to trap them at temperatures so low that they could be investigated at leisure using spectroscopy. Pimentel would generate an inert, transparent matrix of solid hydrogen, nitrogen, carbon dioxide or inert gases, and use this to trap reactive species. This matrix isolation allowed exotic species to be observed, but not to be isolated.

Several chemists based in the US took this a step further. Philip Skell, a chemist at Pennsylvania State University, had the idea of vapourising carbon atoms and condensing the vapour into matrices of frozen olefins; using this technique he successfully isolated strange cyclopropylallenes. Another pioneer was John Margrave, a chemist at Rice University, with an interest in main group carbene analogues. One of his postdocs was Peter Timms, a British chemist who had been educated at the University of Oxford, UK, and spent a short time working for Borax Consolidated before returning to complete his PhD under Courtenay Phillips.

With Margrave, Timms generated SiF2 by flowing silicon tetrafluoride over elemental silicon at high temperature, then condensed it onto a liquid nitrogen-cooled surface. Using this technique, they isolated a rubbery polymer. They also found that, when combined with boron halides and fluorocarbons, SiF2 gave a wealth of products that could be isolated and identified using a combination of chromatography and mass spectrometry.

After leaving Rice and spending a year as a tenure-track professor at Berkeley, Timms returned to the UK to continue this cryochemistry of reactive species at Bristol University. In 1968 he described the reactions of boron atoms with small molecules like hydrogen halides, ammonia and carbon dioxide. If the synthetic method was unusual, the products were not – a variety of boron halides and hydrides. But his next paper, a short communication in 1969, made people sit up and notice.1

[[The designs isolated a wealth of otherwise ‘impossible’ complexes]] The apparatus he used was simple – an evacuated stainless steel chamber sat in a bath of liquid nitrogen. At the bottom, a spiral of molybdenum wire embedded in alumina cement acted as the crucible to vapourise first row transition metals, with water-cooled electrical leads leading down from the lid of the vacuum chamber. A central water-cooled tube drilled with small holes along its length fed the ‘substrate’ into the chamber.

In Oxford, the organometallic chemist Malcolm Green was galvanised. Here was a way of actually conducting the hitherto impossible thought experiment beloved of theorists: combining individual atoms with a set of ligands under exceptionally mild conditions.

Green asked his postdoc Adam Hart-Davis (also a former Courtenay Phillips student) to build something similar. He later recalled: ‘[Malcolm] had this smart idea about using metal vapours and needed a fall guy. I was utterly terrified, heating a furnace to, say, 2000°C inside a flask of liquid nitrogen … Nevertheless I was intrigued by the idea and fascinated by the process as the furnace looked to me, through the deposited material, like a sunset over LA.’

The success of Hart-Davis’ prototype led to a series of designs, which isolated a wealth of otherwise ‘impossible’ complexes and broke new ground in reactivity and catalysis. British chemist Geoff Cloke’s later isolation of zero-valent lanthanide complexes speaks to the power of the technique.

A self-effacing and deeply devout man, Peter Timms loved chemistry and his explosive Christmas lectures were the stuff of legend. His simple idea of dropping atoms into icy substrates ignited an outburst of creativity – a worthy successor to the ice and sherbet makers of the courts of the Medici.

I am grateful to Graeme Hogarth for the idea, and to Geoff Cloke, Pelham Hawker and Peter Kündig for their reminiscences.