There might be a better way to interview new starters, suggests Derek Lowe 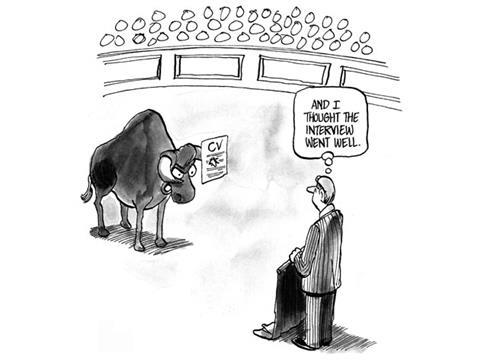 When I was first interviewing for a position in the drug industry, the standard technique for grilling a candidate was to take them up to the board and run them through reaction mechanisms. How would you convert X to Y? How many reagents can you name that will do that reaction? How do they work? Here, this is a reaction that we ran here to do Z, but it failed. Can you see why it didn’t work, and what it made instead?

I can testify that time passes very slowly indeed under such conditions, and at some points it seems to completely solidify. I remember once being asked to name my ten favourite free-radical chemists, which set off a sudden inventory in my head as I tried to think of 10 at all (and never mind my opinions of them). I began to list a few, slowly and apparently thoughtfully, while up in my cerebral cortex I was digging around under couch cushions and frantically dumping drawers out onto the floor. I didn’t make it to the end of the list, which was a good thing on balance, because one of the names I’d tossed out made my interviewer pause. ‘I don’t think I would have ranked that one so highly,’ he said. ‘What recent work of his impressed you?’

I stared at him in dismay. Why had I thought of that name in the first place? Hadn’t there been a JACS paper…yes, that was the stuff to give him. ‘Ah, that does sound interesting,’ came the reply. ‘Here, draw some of that work out for me and let’s talk about the mechanism.’ Right about here, I thought, was about when I usually woke up from this sort of dream, but everything around me seemed relentlessly dense and solid, including parts of my brain. Somehow I staggered through that question, and the second hand on the clock began to move again, but even at the time I spared a brief moment to wonder if this was really any kind of way to interview someone.

I still do. To be sure, someone coming in to a synthetic chemistry position had better know his or her organic chemistry. It’s certainly fair to ask questions that will make sure of that. But does a candidate need to know the curly-arrow details of reactions that they’ll never run? And is the pressure that a candidate is put under with questions such as these really similar to the actual pressures that they’ll be facing during their work? (I should mention at this point that process chemists, whose job is to optimise reaction sequences, probably need to be better at this sort of thing than medicinal chemists, who are pushing along new chemical series.) I’d be more impressed if someone could go into the mechanistic factors that influence the success of palladium-catalysed coupling reactions, because they’re certainly going to be seeing a lot more of those than they will Ramberg–Bäcklund rearrangements or what have you. And I’d be happier to find out that a candidate actually looks over the current literature for new reactions, rather than knowing the details of every one of them discovered in 1958.

There’s another issue here as well. The classic let’s-go-to-the-board interview was developed before electronic retrieval of data was widespread, or even feasible. The greater the storehouse of chemical information a person could carry in their head, the better off they were. Those were the days of handwritten index cards full of synthetic transformations from the journals (for the organised), or ‘I know I saw something like that somewhere’ (for the less organised). Now that so much detail can be called up in so many ways from even the most obscure parts of the literature, memory, past a certain point, doesn’t seem to have the value it once did. Perhaps we should go to the keyboard instead of the whiteboard, and see how well a prospective candidate can look things up when they need to.

No matter what the interview technique, evaluating someone during a single day (or a single hour-long appointment) is hard enough already. The only rule I stick to is that if someone seems bizarre and hard to deal with during a visit, then they almost certainly are that and more – if they can’t hold things together long enough to get through a job interview, how are they going to be like day in day out? But given the short time one has to decide how much someone knows, and how useful they’ll be, it would seem wise to ask questions that are relevant to the work at hand, and save the more exotic electron-pushing until later.