In the future, people will read about Valeant in classes on business and investing – or at least, they certainly should. It’s been an instructive story, although the lessons themselves have been rather expensive for some of the current student body. For several years, the company was a great favourite of large investment funds, because it seemed to have come up with a way to access the sizeable profit margins of the drug industry without taking on the usual hand-trembling risks. 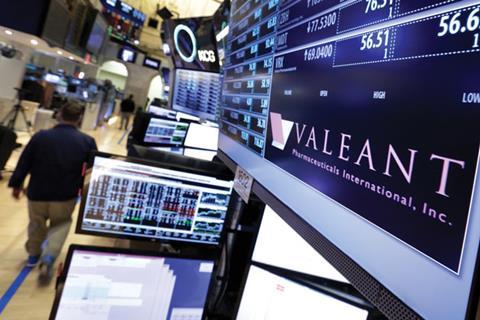 As Valeant’s story has unravelled, its market valuation has plummeted

But as with every other idea that promised to decouple risk and reward (really, it’ll work this time!), there turned out to be a tiny catch. As that catch has been exposed, the company has come under fire from regulators, politicians and investors alike.

Valeant’s business model was to eschew R&D spending, very noisily and publicly, in favour of licensing drugs from other companies that hadn’t realised their commercial potential. That way, so the story went, these compounds could then be sold for high prices, while Valeant itself took on none of the risks involved in bringing them to market.

Now, the ‘just in-license everything’ idea has been floating around the industry for at least 20–30 years, probably longer. And by now, you’d think that several companies have thought about it, run the numbers, and decided that it wouldn’t quite work. Either there simply weren’t enough compounds out there to be had, or their costs would escalate under these conditions, or their markets weren’t large enough or diverse enough – those and other reasons seem to have kept this model from ever being applied at large scale.

Valeant, though, was apparently the exception. Its admirers said that it was remaking the drug industry, and its detractors feared that this might be true. When a drug came under the Valeant tent, the first thing you could be sure of was that its price was going up, steeply – that was the only reason they would be interested in a deal in the first place. And this makes a person wonder: if there were so many opportunities for big price increases, why hadn’t these drugs been selling for more to start with? Particularly after a few examples, you’d think that any interest from Valeant would be equivalent to a notice that your drug was being sold too cheaply. ‘Too cheaply’, though, needs some qualification. In several cases, Valeant was relying on US regulatory loopholes to raise the price of older drugs in ways that no one had really anticipated. But in other cases, it was hard to see how it could get away with its pricing at all, since several of the drugs had cheaper generic competition.

The answer, we now know, is that they couldn’t. The company turned out to be working with a network of speciality pharmacies, whose main purpose seems to have been converting as many prescriptions as possible into Valeant-marketed drugs. Short-selling investors uncovered this scheme, as well as several other irregularities in the company’s accounting. However, it should also be noted that Allergan, which fought off a Valeant takeover attempt, had also tried to point out that the company’s numbers didn’t always make sense. That was dismissed at the time as the sort of thing a company would say when it didn’t want to be taken over by a better, stronger, smarter one like Valeant. For a while, Valeant’s biggest investors also tried to dismiss the short-sellers as people who just didn’t understand a great business when they saw one.

But in the end, the skeptics were right. This business model really didn’t work, and the only way to make it look as if it did was to cook the books. Valeant kept telling the investing world that its profits were large and growing, and that this growth came from new sales (not just from raising prices), and several massive investment funds believed it all. Their trusting natures have lost them billions of dollars in cash, and perhaps even more than that in credibility.

I think that some of this debacle comes from a persistent feeling among business types that the drug industry really shouldn’t be all that hard – not for people who understand something as complex as investing, anyway. All those tales of risk and uncertainty, why, they’re probably coming from people who just don’t know what modern management and finance are capable of. Well, to borrow the inscription from Sir Christopher Wren’s tomb in St. Paul’s cathedral in London, UK – if you want a monument to this sort of thinking, look around you.