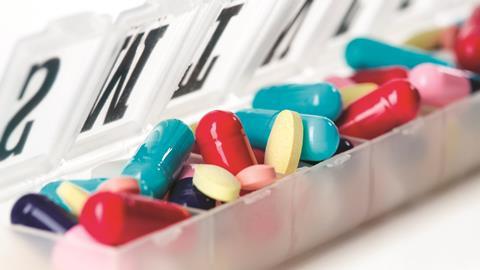 The challenges of multi-drug formulation aren’t going away

We’ve all seen people who are taking several prescriptions at once, working their way through a list of different-sized pills. (Some of us may be those people!) It’s natural to wonder about why things can’t be made more convenient, by combining well-known combinations into single pills. There are some of these on the market, but why aren’t there more?

Financial issues play a role. But there are even more medical, pharmacokinetic and formulation reasons for this situation. When you look at the current combination pills, the most often-used ones tend to be for situations where there isn’t a great deal of variation in the dosages of either agent. A classic is amoxicillin and clavulanic acid – an antibiotic and an agent that deactivates the most common bacterial resistance enzyme for that same antibiotic. The ratio between the two drugs is basically a constant; there’s no real need to administer greater or lesser amounts of clavulanic acid along with a given dose of amoxicillin. This combination pill either knocks down a bacterial infection or it doesn’t. There’s not much middle ground.

You can’t really kill too many disease-causing bacteria, but you can lower someone’s blood pressure more than required

But many other therapeutic areas seem to be almost nothing but middle ground. You can’t really kill too many disease-causing bacteria, but you can lower someone’s blood pressure more than required. On top of that, there are a wide range of different ways to lower blood pressure, and individual patients respond differently to them. A combination regimen is often a good answer, but the ratio between the two drugs is more of an open question. Doctors need the flexibility to change the dosages without having to write a completely new prescription, and drug manufacturers are not that enthusiastic about having to produce a whole range of different combination pills just to get two medicines into one.

Where combination pills make the most sense are in disease areas such an anti-infectives, where the object is to hit the infection as hard as possible, and in situations where a complex regimen of different therapies has to be administered. Antiretroviral treatment for HIV is a perfect example of these two situations overlapping. This is where some of the most complex combination pills are found, using three and four different agents with different mechanisms of action blended together. Producing one of these is, as the development scientists say, ‘non-trivial’, because you have to worry about several things at once. Do the dosing schedules of the various drug line up? Do they interfere with each other’s absorption, metabolic clearance or mode of action in any way? Are they chemically compatible when formulated into a single pill and, if so, what should that pill be like (particle sizes, other ingredients, coatings and so on)? Will this resulting combo-pill be stable on storage, and can it be manufactured reliably within tolerances?

All of these question have to be answered by testing – which costs time, effort and money. And all of the problems just mentioned are real, so none of them can be taken for granted. There’s even an example, again in treating HIV, of a drug, ritonavir, that’s given as part of a combinations therapy in order to interfere with an enzyme that might otherwise clear the other drugs too quickly. And while this is a real benefit for antiretroviral treatment, it can be a significant problem for a patient who needs to take some other drug entirely.

It may be that, as cancer treatments get gradually rationalised, similar situations may emerge; this is another therapeutic area where the objective is usually to hit the targets as hard as possible. But for diseases that need treatment titrated and adjusted to each individual patient, it may never happen. Indeed, cancer treatment could just as easily remain in that category as well, since each patient’s tolerance for the individual treatments can vary a good deal.

But all this extra work is clearly worth it: in complicated situations with multiple pills, patients are much happier (and much more likely to get the treatment right) when things are combined.