Why Dorothy Hodgkin belongs on the £50 banknote

When it comes to the scientist that I want to see on the new £50 note there’s only one contender: Dorothy Hodgkin. She is the only British woman (and one of five in history) to win the Nobel prize in chemistry – and her work has taken on new relevance today with the rise of superbugs that are resistant to antibiotics.

Penicillin marked one of the greatest medical advances of the last century. Yet as early as 1945, discoverer Alexander Fleming recognised that the drug’s overuse could drive the evolution of resistant bacteria. It would take the x-ray studies of Dorothy Hodgkin to reveal the molecular structure of penicillin so that we could understand how resistance was emerging – the first step towards developing new antibiotics.

Hodgkin was based in Oxford, where Howard Florey and Ernst Chain were studying naturally produced chemicals that could kill bacteria. Florey’s assistant, Norman Heatley, had cracked a problem that had stumped Fleming, that of extracting the penicillin from the mould, and Hodgkin was enthralled by their work. In 1941 she wrote to her husband: ‘I’ve just come back from visiting Chain and … I’m feeling disgustingly cheerful. The main purpose of Chain I may say is that he works on penicillin – you may remember the stuff … that almost brings people back from the dead.’ 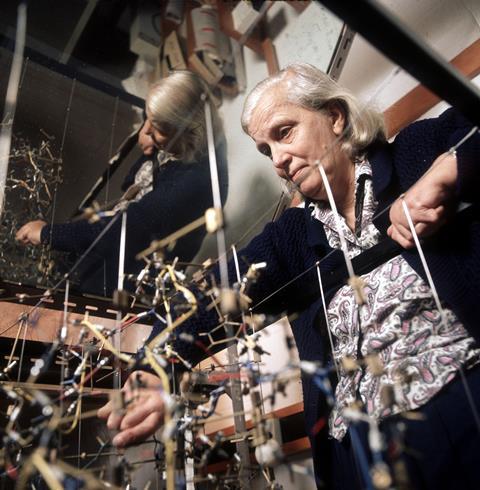 Because of its importance for the war effort, American authorities declared penicillin a ‘high-security secret’ yet some of the first penicillin crystals made in the US were flown to Hodgkin to study. It was not possible to focus x-rays scattered by the crystals, so she used punch-card operated tabulators – predecessors to the computer – to calculate how the molecule diffracted x-rays.

On 8 May 1945, the day the war in Europe ended, she completed the 3D structure of penicillin at a time when its chemical formula was still the subject of much debate. The Science Museum in London, UK, has her model of the structure in its collection, which reveals the key part of the molecule – a β-lactam ring. This is more like a square than a ring, consisting of carbon and hydrogen along with oxygen and nitrogen atoms. At that time, it was the largest molecule ever to have been solved by x-ray methods. The β-lactam ring enables the drug to target bacteria specifically, while having no effect on human tissues, and interferes with the construction of bacterial cell walls, preventing the bacteria from multiplying.

After the discovery of β-lactamases, enzymes that make bacteria resistant to the drug by degrading the β-lactam ring, scientists realised it would be possible to inhibit these enzymes to counter resistance. New subclasses of penicillins were synthesized during the ‘golden age’ of antibiotic discovery between 1950 and the 1970s, and other β-lactam antibiotics were found, including cephalosporins, monobactams and carbapenems.

The next molecule she tackled was vitamin B12, a hugely complex structure of 100 atoms. When her team solved it in 1957, Lawrence Bragg – the pioneer of x-ray crystallography – described her achievement as equivalent to ‘breaking the sound barrier’. Hodgkin would become one of the first women elected as a fellow of the Royal Society and would win the Nobel prize in 1964. One only has to look at the headlines in the newspapers about how a ‘British wife’ had won science’s ultimate prize to realise how she would help change antediluvian attitudes. 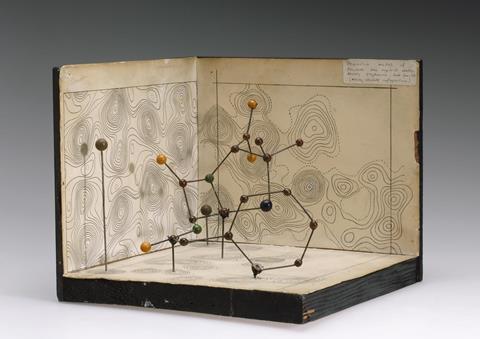 Hodgkin’s 1945 model of the structure of penicillin

After over three decades of painstaking analysis, Hodgkin determined the 3D structure of insulin, the hormone that helps the body absorb glucose that plays a central role in diabetes. In this way, Hodgkin helped to lay to rest the idea of vitalism: biology was simply complex chemistry, and our bodies are no more than molecular machines.

Hodgkin taught the future prime minister Margaret Thatcher but she was a firm socialist and supported communist governments. Her team was also truly international – a novelty at the time. In this way, she influenced the development of science in China, India and South America.

Modern structural biology of the kind pioneered by Hodgkin – using x-rays and cryo-electron microscopy – still plays a key role in the fight against infectious disease, with the latter winning the Nobel prize in chemistry in 2017. In 1965 she was presented with the Order of Merit, the second ever female recipient after Florence Nightingale 58 years earlier. She died in 1994, aged 84. In her honour, the Royal Society established the prestigious Dorothy Hodgkin fellowship for early career stage researchers.

Today, in the Science Museum’s Superbugs: The Fight for Our Lives exhibition, you can explore humanity’s response to the unprecedented global threat of antibiotic resistance. The concern about this threat to modern medicine is such that the exhibition will be taken on an international tour across India and China to help address the lack of public awareness and understanding about antibiotic resistance. Supported by the Wellcome Trust in partnership with the National Council of Science Museums in India and Guandong Science Center in China, new versions of the exhibition will visit eight venues and reach more than 1 million people within two years.

On the new £50 note, Dorothy Hodgkin will be a dazzling reminder of how British ingenuity has led the way with antibiotics. Today, through the efforts of bodies like the Medical Research Council, the Longitude prize and more, the UK will continue to play an important role in when comes to curbing untreatable superbugs that now kill almost 700,000 people a year.

Who could be more appropriate for the new design of the highest denomination banknote than to acknowledge the astonishing legacy of the scientist who discerned the molecular designs of life?