Would you buy synthetic wine?

Can we replicate the chemical profiles of famously expensive drinks? And would people drink them?

Reductionism! Come on, you know you love reductionism; every scientist does. Science itself has advanced by breaking large, intractable problems down into smaller, feasible ones, assembling the pieces into giant chains of causality. And it’s definitely served us well, as we’ve explored the sequences of matter–molecules–atoms–subatomic particles and living creatures–organs–tissues–cells–organelles–biomolecules.

But reductionism leads to some well known philosophical questions. Over the centuries, many people have had a hard time letting go of vitalism, the idea that a living creature has some sort of vital essence that is not captured by thinking of it as an intricate assembly of tiny moving parts. We’re not going to solve that one today, but let’s turn to a chemical example that’s a lot closer to it than you might think: food and drink. 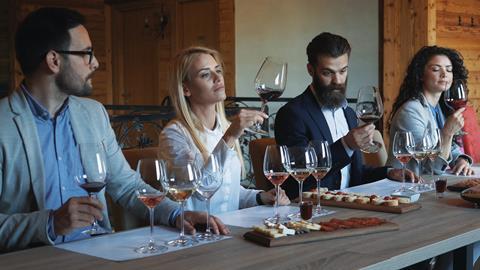 Could you spot the difference between a synthetically created or augmented wine and the ‘real thing’?

If you’ve read the helpful signage in any store that makes its profits from selling wine, you will have encountered rhapsodies in prose about ‘warm oak notes’, ‘structured tannins’ and improbable firework bursts of fruit, as well as references to leather, floral arrangements and various components of the spice cabinet. Move on to distilled spirits, and you’ll note immediately that the longer something has sat in a barrel, the more it will cost you. That makes economic sense (opportunity cost and all), but the idea is that the flavors have become more concentrated and complex, and worth paying more to experience. You will hear a lot about the soil, the grains and fruit that were grown in it, the air and light and weather, the wood of the barrels and its heritage, the undeniable skill of the people who produced the wines and spirits from all these, and indefinable essences that all this adds to the experience of what’s in the bottles themselves.

Come on down and get reductionist with me, though. What is in these bottles is water and ethanol, in various proportions, along with a variety of trace substances in low concentrations. Those are crucial, and there are a lot of them, but their number is finite and they can presumably be analysed, identified, and their concentrations determined. If one does that, assembles all those components, and mixes them together in the same proportions, does one not have an identical solution to the one obtainable at the liquor store? Food – or rather, drink – for thought.

This is not an easy process. But there are people and companies trying it. Recreating a vintage Burgundy is a high enough bar that no one (to my knowledge) is trying that yet. But one can identify interesting and important flavour and aroma components in desirable wines and whiskies, and it doesn’t take a leap of imagination to think that adding these to lesser and more easily obtainable bottles might make them much more palatable. If one can get 90% of the way to a famous single malt and sell the result for 50% of the price, is that a bargain or not? Or do you want to go in the opposite direction and charge even more for a modern, cutting-edge tipple that no one has ever tasted before? Customers are even now beginning to be asked those questions.

If one assembles all the components, and mixes them together in the same proportions, does one not have an identical solution to the one obtainable at the liquor store?

Thus proceeds molecular gastronomy, and it seems hard to imagine that we won’t be seeing more of it. My own guess is that synthetic or partially synthetic wines and liquors will claim a place in the market, but that this will only elevate the prices of the stuff that’s produced from actual grapes and grain. Those will become artisanal by default, no matter the size of the industrial operation that actually produces them. In fact, this might end up making the mystique of terroir and tradition even more entrenched than it is already – it’s what these bottles have that those others don’t have at all. It’s already clear that people tend to enjoy a wine more when they think that it was more expensive, even if it’s just had a new label stuck on the bottle.

In the end, it really is the variety of grapes and grain, the conditions they’re grown under, and the skill involved in their production that determines all these tastes. But those things are there to manipulate the chemical constituents, to make them come out in a way that people will pay to experience. All that’s in the bottle is chemistry, but the entire experience of drinking it, and the value we place on that, is up to us. The real terroir is between our ears.