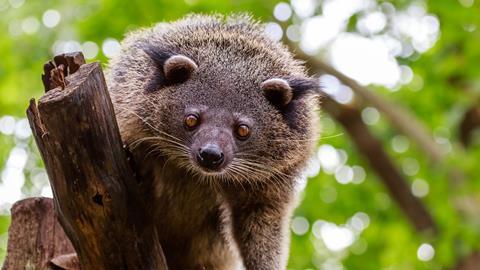 Frances Addison on the aromatic compound found in both buttered popcorn and the bearcat’s scent glands, and responsible for the distinctive smell of both

This week, a case of nominative determinism and a compound that may put you off your popcorn. Here’s Frances Addison.

Even among the plethora of nature’s quirks and eccentricities, bearcats – or binturongs – are a particularly strange creature. A type of civet that is widespread in South and Southeast Asia, they are one of the handful of species that have a fully prehensile tail ; they can live for over 25 years; and despite being officially classed as meat-eaters, they’re known to chow down on pretty much anything they can get their paws on. If you ever manage to get close to one however, perhaps you’ll notice the bearcat’s most striking – and peculiar – feature: the strange but unmistakable smell of buttered popcorn. 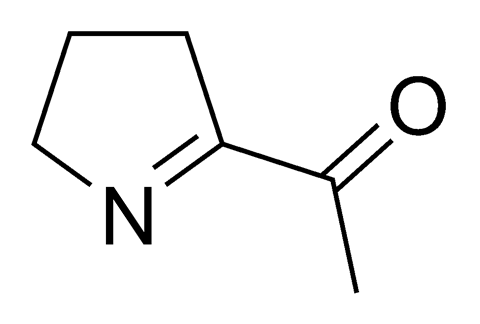 The compound responsible for this bizarre aroma is 2-acetyl-1-pyrroline, more commonly referred to as 2AP, and while bearcats might seem quite exotic, 2AP is anything but – in fact, you’re likely to have some in your kitchen right now.

The compound was first isolated and identified in 1982 by the fortuitously named Ron Buttery and his team, who were investigating the molecules responsible for the aroma of scented rice. This may sound like something of mere academic interest, but this research was of tremendous significance for the food industry; according to FAOSTAT , nearly 1 billion tonnes of rice was produced worldwide in 2018 and the grains’ distinctive aromas are an important factor in their classification and value.

After Buttery’s initial discovery, 2AP started being identified all over the place; it showed up in everything from unicellular bacteria, to bread and even complex mammals. By far the most common interaction people will have with the molecule is down to its prevalence in food. Beyond the role it plays in the fragrance of rice, 2AP has also been found to act as an important flavour compound in the Maillard reaction, the process responsible for the browning effect seen when cooking foods like onions, or perhaps a festive turkey. And, of course, it’s responsible for the distinctive smell of buttered popcorn – also thanks to the Maillard reaction. 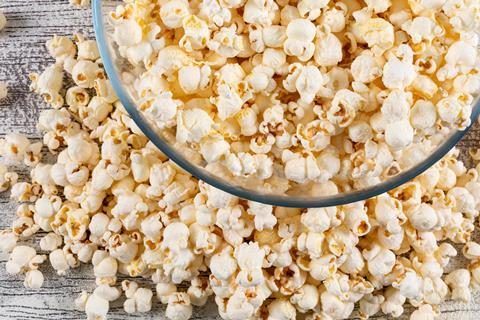 Unsurprisingly for a molecule most notable for its smell, 2AP is extremely volatile and has a very low odour threshold – humans have been found to be able to detect it at concentrations as low as 20 ppt in air. This volatility, combined with its pleasing scent, has made 2AP a very interesting prospect commercially, but its instability comes at a cost – pure 2AP degrades within ten minutes at room temperature, and so its concentration in food rapidly drops, including in raw rice. As a result, food manufacturers have struggled to successfully adapt it to use as an artificial additive, despite its prevalence in nature.

Why then, does a molecule responsible for fragrant rice and delicious roast dinners make an appearance in the bearcats’ life cycle? Well, it’s likely linked to the reclusive animal’s desire for solitude. Bearcats urinate in a squatting position that coats their feet and bushy tails with wee, which then gets dragged behind them while they walk and climb. Spreading their distinctive popcorn scent across their territory like this is an unmistakable warning sign to other animals in the area to stay away, no matter how appealing us humans might find it to be. 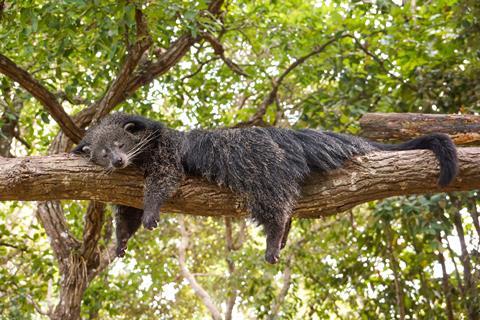 It’s still unclear exactly how bearcats produce 2AP. A study in 2016 failed to identify any dietary source of the molecule, leaving researchers to conclude that it may be produced by microorganisms living on the animals’ skin or fur, or in its digestive tract. The same researchers also found that male bearcats secrete more 2AP than their female counterparts, though again, the exact reason for this discrepancy is unclear. Bearcats aren’t alone in using 2AP as a marking fluid either. Further studies have suggested that the compound may also be responsible for contributing to the scent of urine produced by Indian leopards and various species of tiger from across Asia.

There’s still a lot to be discovered about the natural synthesis of this aromatic compound and its role in bearcat biology, but please, don’t let image of a civet squatting to wee on its own legs and tail put your off your bowl of Buttery popcorn.

That was Frances Addison with 2AP. Next week, Brian Clegg with a compound that may be found in life, but not life as we know it…

This was the idea that allowed the tetchy Dr McCoy in the original series of Star Trek to come up with one of his best remembered lines: ‘I’m a doctor, not a bricklayer.’ Outside of fiction, there is one compound that gives us a chance to evaluate the chances of ever coming across silicon-based life. It’s called hexasilabenzene.

Join Brian next time. And until then, find all of our previous podcasts at chemistryworld.com/podcasts and let us know if we’ve missed a compound with an interesting story – email chemistryworld@rsc.org or tweet @chemistryworld. I’m Ben Valsler, thank you for listening.

Additional music: River Runs Through by Door to Penglai, via Soundstripe