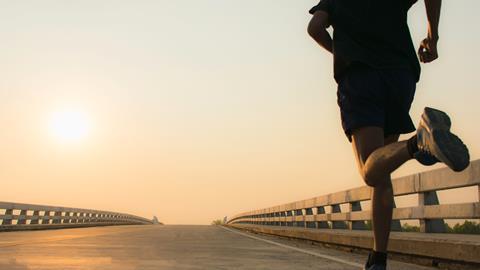 This week, the compound giving us the energy to get through the day. Explaining more is Hayley Birch:

Variously referred to as the currency of life, the universal energy carrier and the universal currency of biological systems, adenosine triphosphate, or ATP, has a lot of names to live up to. If you hadn't heard of it before, you'd wonder what on Earth it could have done to have earned such monikers.

Actually, most of us will have heard of ATP before, even if it was in a biology lesson that we've long ago forgotten about. Because - without the hyperbolae - it's the main molecule supplying the energy that cells need to carry out their day-to-day business. It takes the chemical energy from our food and makes it available for useful work. When muscles contract, they use ATP; when cells make proteins, they use ATP; when a firefly lights up, it uses ATP; and when a sperm propels itself towards an egg, guess what it uses? ATP. 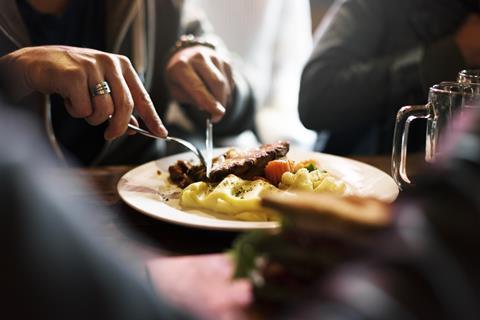 The question is: what makes ATP such a brilliant energy carrier that it can be used so universally and recycled so rapidly? It's just a nucleic acid, adenosine, attached to a sugar with a triphosphate arm sticking out - hence the TP. Well, first of all, it's not the only energy carrier in biological systems. There are other molecules that do similar jobs, such as GTP (guanosine triphosphate) and creatine phosphate, but we don't hear about them anywhere near as often. That's because they're not nearly as useful. So ATP is the best, right? It generates the most energy, lights the most fireflies, propels the most sperm, and so on and so on?

Well, not exactly. We were told in our science lessons that ATP has this extremely high energy bond; break it and 'poof!' - loads of energy. The bond everyone is referring to is the one between the last two phosphates in the triphosphate arm. When Fritz Lipmann described the central role of ATP in biology in 1941, this was the 'high energy' bond he denoted with a squiggly line and a 'P'. It's called a phosphoanhydride bond, and is actually a phosphorus-oxygen-phosphorus link. Sometimes textbooks show it with a miniature cartoon explosion around it. 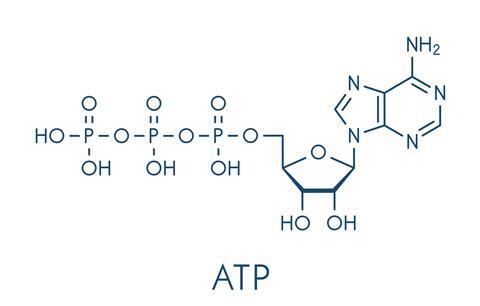 The energy produced by this phosphoanhydride bond comes when it is broken, or hydrolysed, in a reaction with water, to form adenosine diphosphate, a hydrogen ion and a lonely orthophosphate, PO43-, containing the severed phosphorus atom. In ATP, the amount of energy produced when this happens is considerable, but not exceptional.

There are certainly other phosphorylated compounds that produce more energy when they are hydrolysed. In muscle tissue, cells will often turn instead to creatine phosphate to provide the high energy phosphoanhydride bond. When this bond is broken in creatine phosphate, it produces nearly half as much energy again as ATP. Olympic 100m sprinters use mainly creatine phosphate for the first half of their race.

Why is ATP so special then? One reason is that its so-called 'high' energy bond is low enough in energy that it's fairly easy to break, making it an ideal universal energy carrier. ATP's phosphoanyhydride bond is fairly unstable, partly because there are a lot of negative charges flying around the triphosphate arm, all repelling each other. Breaking the bond reduces the repulsion and produces the more stable ADP molecule. And if you recall, ADP and that lonely orthophosphate have to somehow be recycled back into ATP - and quickly. It makes sense that a bond that can be fairly easily broken can be fairly easily put back together.

One Indiana biology professor called it a Goldilocks bond. He used 'Goldilocks' to refer to a sweet spot - in the same way that Goldilocks chose the porridge that was not too hot and not too cold, a Goldilocks bond is one that is not too weak and not too strong. ATP's phosphoanyhydride bond is not so easy to break that it releases a pitiful amount of energy and not so strong that it's too difficult to break or put back together. And as we know, this bond has got to be broken and put back together a lot.

Indeed, a compound that's constantly on the go, even if you're not. Tat was science writer Hayley Birch, with the energy-releasing chemistry of adenosine triphosphate, or ATP. Now, next week, a compound bringing flashbacks of war.

My grandfather served in the first world war, lying about his age in his eagerness to sign up and fight for his country. In later years, he told many tales of warfare in Belgium. But nothing held the same horror for him as the gas attacks. Though he never experienced them first hand, they remained the ultimate bogeymen of that terrible conflict.

The sulfur mustards were the final, most terrible agents of chemical warfare.

And to find out just how sulfur mustard made such an effective chemical agent, join Brian Clegg in next week's Chemistry in its element. Until then, thank you for listening. I'm Meera Senthilingam.