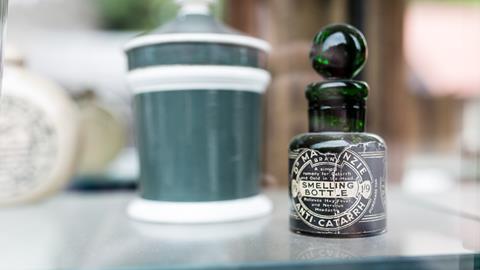 Ever taken a whiff of smelling salts? For many years, the compound that contributed the pungent pong was ammonium carbonate

I have a vivid childhood memory of discovering a bottle of smelling salts in a friend’s house. I had no idea what they were, but a vague inkling of seeing similar bottles used on TV to rouse the unconscious. Being an inquisitive child, I opened the bottle to have a sniff.

I don’t clearly remember what it smelled of, just that it was overpowering and not particularly pleasant.

Although smelling salts don’t seem so prevalent these days, Michael Freemantle discovered that you don’t have to look far to find that small, reviving bottle… 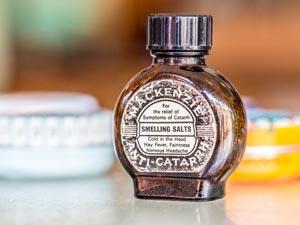 Smelling bottles at that time typically contained an ammonium salt as the active ingredient. On opening the bottle, the salt released ammonia. When inhaled, the pungent gas has a powerful impact on the airways causing vigorous breathing. The salts were traditionally used to revive people in distress, most notably those who were fainting or had fainted.

There is some evidence that sal ammoniac, an ammonium chloride mineral, was used for several centuries as a smelling salt. However, by the 19th century, the use of ammonium carbonate for this purpose was well established. It was widely known as sal volatile, or salt of hartshorn, or simply hartshorn.

In Thomas Hardy’s 1878 novel The Return of the Native, a bottle of hartshorn is applied to the nostrils of Clym, one the main characters in the book. Clym had been pulled unconscious from a pool of water onto the bank. ‘He soon breathed distinctly,’ writes Hardy.

Hart is the medieval name for a stag. Oil of hartshorn was traditionally obtained by distilling the shavings of its antlers in the absence of air. It was also produced from the horns, hooves, and bones of other animals. The oil yielded salt of hartshorn, a substance rich in ammonium carbonate.

Years before the novels by Collins and Hardy were published, Jane Austen was writing about hartshorn. In 1795, Austen drafted Sense and Sensibility at her home in Steventon, a village not far from Basingstoke. The novel tells the story of Eleanor and Marianne Dashwood and their romances. At one stage, Marianne becomes unwell and is taken to a room where, so the story goes: ‘hartshorn restored her a little to herself.’

Coincidentally, Austen’s brother James loved hunting and on at least one occasion rode out with the Prince of Wales on a stag hunt. The prince, who was later to become King George the Fourth, rented a house as a hunting lodge at Kempshott Park, and kept a pack of stag hounds there. Could it be that the stags they hunted in the Hampshire countryside provided a source of hartshorn for the local community?

The use of smelling bottles known as vinaigrettes proved popular during the Victorian era. The bottles typically contained a sponge soaked with a mixture of hartshorn and perfume dissolved in alcohol or vinegar.

By the 20th century, other methods were used to obtain salt of hartshorn. One of the most common ways was to heat a mixture of ammonium sulfate and calcium carbonate. The ammonium carbonate product rapidly decomposed into two other ammonium compounds: ammonium bicarbonate and ammonium carbamate. Both of these compounds readily release ammonia when exposed to air. 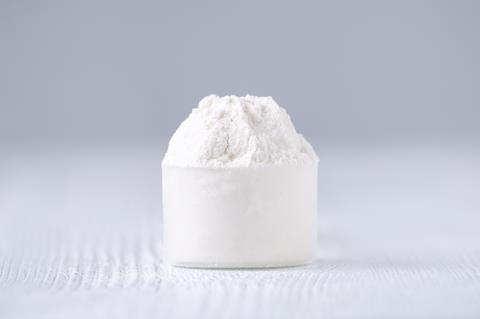 Ammonium carbonate is a hard colourless crystalline compound. It has been used not only in smelling salt preparations, but also in baking powders, in the manufacture of rubber products, as an analytical reagent, and for many other applications.

I must confess that I have never used smelling salts and, until I started researching them, I was not aware that they are still commercially available. Furthermore, and to my surprise, I discovered that smelling salt preparations may not actually contain ammonium salts, or any other salts for that matter.

As I sit here writing, I have in front of me a small bottle of MacKenzies Smelling Salts that I purchased recently at a local pharmacy. The contents are listed on the packet. They are: ammonia liquor, eucalyptus oil, glycerol, soft soap, tapioca and water. The packet states that the salts are a ‘traditional remedy to relieve catarrh and head colds.’ Well, I don’t have catarrh or a cold at the moment. Nevertheless, I have just opened the bottle and sniffed the contents. Wow! The smell of ammonia packs a powerful pungent punch. I’ll certainly have another sniff the next time I have a cold.

Michael Freemantle on the reviving powers of ammonium carbonate, or hartshorn, once found in smelling salts. Next week, Kat Arney takes a shot at the controversy around vaccines…

Vaccines against all kinds of infectious diseases have saved countless lives, here in the UK and around the world. But because thiomersal contains mercury – which in its liquid metal form is extremely toxic – some safety concerns have been raised about the preservative. But since the 1990s, certain groups have raised concerns that the thiomersal in childhood vaccines may be responsible for causing autism, even though there’s no good scientific evidence to support this idea. In some people’s minds all vaccines have become guilty by association.

Kat Arney on thiomersal, also known as thimerosal. Until then, drop us a line with any compounds you would like us to delve into – email chemistryworld@rsc.org or tweet @chemistryworld. I’m Ben Valsler, thanks for listening.