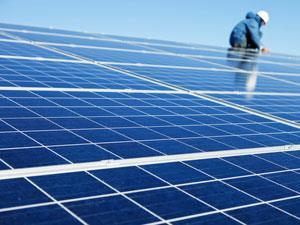 The sound you can hear is an audio version of Sputnik’s radio transmission – recorded by NASA in October 1957. Sputnik was a fairly basic satellite, and short lived, but nonetheless ground-breaking  . Technologies developed in its wake, such as the solar panels that power some modern satellites, have since come to benefit us back down on Earth. But not, as Brian Clegg discovers, without some compromise.

Neither the metal cadmium nor the metalloid tellurium are everyday elements, though a small amount of cadmium was used in the now largely obsolete nickel-cadmium rechargeable batteries, and tellurium may be lurking in re-writable CDs and DVDs. But together, in cadmium telluride, they provide a material that can increasingly be seen in arrays of panels, catching the rays of the sun. Because cadmium telluride is one of the leading semiconductors used to convert sunlight to electricity in photovoltaic cells. 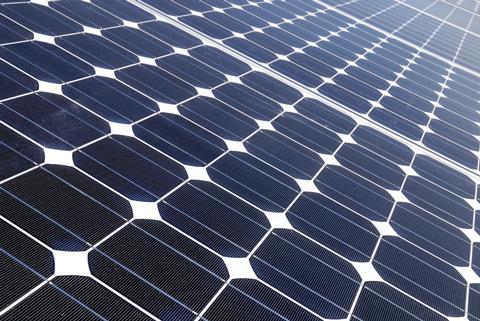 The idea of using a semiconductor to produce electricity from light goes back a surprisingly long way, decades before Einstein would explain the photoelectric effect in the paper that won him the Nobel prize. For example, the American engineer Charles Fritts described a working ‘selenium photocell’ in the American Journal of Science in 1883. But realistic devices making use of the way that electrons could be boosted free of a molecular structure by the energy in photons of light only started to become practical, rather than interesting demonstrations, in the 1950s.

The driver initially for the development of solar cells was the need to provide electricity to satellites. Conventional batteries alone were heavy and short lasting. Over 60 per cent of the mass of the very first orbiting artificial satellite, Sputnik 1, was in its batteries, which gave out after just 22 days of use. But if the power for a satellite could be derived from sunlight, the probe could operate far longer. What’s more, outside the inconvenient disruption of weather in the atmosphere, solar cells in space could be far more effective.

A space programme may drive the development of new technology, but it is not ideal to push for cost-effective solutions. The tradition in space has always been to go for the very best available, with cost being of limited concern. However, if these new photovoltaic cells were to become an effective mechanism for generating electricity back on Earth, there would always be a trade-off of the cost of manufacture, the robustness of the cells and the efficiency with which they could convert sunlight into electricity. This is where cadmium telluride has proved a very useful compromise.

Efficiency reflects how much of the energy in sunlight is converted into electrical energy. The nineteenth century attempts achieved little more than a 1 per cent conversion, while the absolute best modern cells operate around the 50 per cent mark. Cadmium telluride sits around the midpoint, typically in the 20 to 22 per cent range. This might seem feeble compared with the best performers, but here’s where the balancing act comes in. Cadmium telluride has two factors going for it. 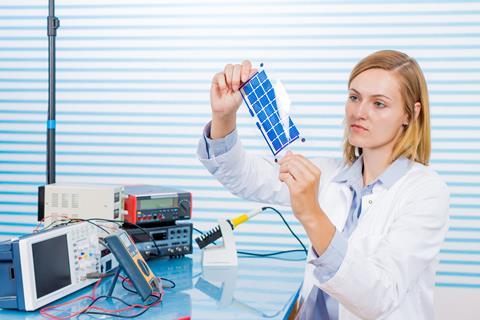 The first is flexibility. Cadmium telluride is used in a thin film photovoltaic. Here, instead of relying on inflexible, relatively heavy crystal wafer structures, the active material is only micrometres thick making it light and adaptable. Although in practice the cadmium telluride film is sandwiched between glass sheets, for protection, it is still less bulky than the older types of cell.

Most importantly, though, it is cheap. Even though it may not be as efficient as some alternatives, the production costs are significantly lower, making cadmium telluride, at the time of writing, the photovoltaic source producing the cheapest energy. We are now starting to see cadmium telluride arrays in some of the world’s largest solar power stations, including the 550 megawatt Topaz Solar Farm in California. This output is comparable to the power generation of a conventional coal, gas or nuclear power station.

The substance is, for the moment, relatively low cost to obtain. Cadmium turns up as a by-product of steel making, and though tellurium is not a common element, there is currently sufficient available from the waste of copper mining. While tellurium might become harder to produce from mining as usage grows, a considerable amount of work has been done on recycling the compound from disused photovoltaic cells, and it is expected that there will become a time when most of the tellurium required can be obtained from this source.

Although solar cells dominate the use of cadmium telluride, the compound has also proved valuable for some specialist applications, such as infrared telescopes, as it has excellent infrared transparency, and by doping it with selected elements it can also act as a sensitive detector for different ranges of electromagnetic radiation from infrared to gamma rays. These niche uses are interesting but it is cadmium telluride’s role in generating sustainable energy that makes it a sunny addition to our available compounds.

Brian Clegg on how cadmium telluride helped to bring solar panels down to Earth, and helps infrared telescopes see out into space. Next week, one of the most important drugs of the 20th century

Just seven weeks after it was first synthesized, haloperidol (still known as R 1625) was being given to patients and the clinical effects of the drug were being studied by Belgian psychiatrists. That same year, an international conference on R 1625 was held, substantially contributing to the rapid adoption of the drug in Europe and beginning to establish this drug as one of the most important antipsychotic medications in psychiatry.

Raychelle Burks tells the story of haloperidol, or Haldol, now considered an ‘essential medicine’ by the World Health Organisation. But until then, if there are any compounds you’d like to know more about, let us know! Tweet @ChemistryWorld or email chemistryworld@rsc.org. I’m Ben Valsler, thanks for joining me.