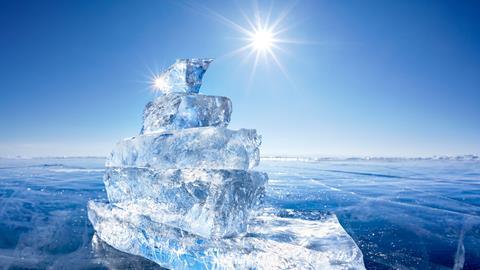 A lightweight, bulletproof material made from ice and wood pulp

This week, Kit Chapman brings us one of Britain’s more eccentric wartime inventions.

World war two conjured up a lot of strange innovations in science. Some, like the atomic bomb, the helicopter, guided rockets and the jet engine have become famous. Others, such as the cavity magnetron, are less well known but still changed the world – today the technology is used to power your microwave. And each side in the conflict had its own eccentric inventors, who tried to do their part by investigating areas of science that, today, we’d consider a little bonkers. Of these, Project Habakkuk was probably the strangest: an attempt by the British to build an aircraft carrier out of ice.

Habakkuk was the brainchild of Geoffrey Pyke, an eccentric inventor whose other schemes included drugging soldiers with sleeping pills and firing them down a pipe into enemy territory. In 1942, he turned his mind to the problem of how to prevent ships from icing up. However, a conversation with chemist Max Perutz changed everything. Perutz recalled:

‘Pyke handed me a report that he said he found hard to understand. It was by Herman Mark, my former professor of physical chemistry…. as an expert on plastics, he knew that many of them were brittle when pure, but could be toughened by embedding fibres such as cellulose in them, just as concrete can be reinforced with steel wires. Mark and his assistant… stirred a little cotton wool or wood pulp – the raw material of newsprint –into water before they froze it, and found that these additions strengthened the ice dramatically.’

Pyke’s material had the potential to dramatically increase air power at sea. In the height of world war two, the British and Americans had quickly realised that the days of battleships were numbered: planes were the future of sea battles, able to hunt and destroy enemy ships and submarines far more effectively. Pyke’s idea was to create artificial airfields out of a new material in the middle of the ocean – effectively a floating iceberg airport. 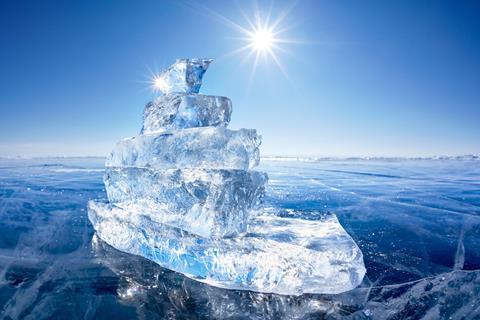 Geoffrey Pyke hoped that the material he developed during world war two, made from ice and wood pulp, could be used to build an aircraft carrier.

Perutz, along with some commandoes who were assigned to be his technicians, set to work making this new material in a frozen meat locker under Smithfield Market in London. Mixing wood pulp and ice, the team were soon able to build a lightweight, bulletproof material as tough as concrete. They called it pykrete.

Pyke took the material to Lord Mountbatten, who was so excited he rushed to find Winston Churchill. Surprising the Prime Minister in the bath, Mountbatten dropped the icy block of wood pulp in with him. The outside melted; the remainder of the block stayed afloat. By 1943, Mountbatten and Churchill were convinced, and project Habakkuk was approved.

Unfortunately, the project was a failure. Pykrete was certainly strong, but it had to be kept cool. While it took longer to melt than pure ice, it did still melt, and the cost of building a refrigeration plant to preserve the material was more than a fleet of normal aircraft carriers. The war had also changed: planes were given larger fuel tanks and Portugal had granted the Allies permission to use airfields in the Azores, removing the need for floating bases in the Atlantic. By 1944 project Habakkuk was sunk.

And yet pykrete persists. By mixing ice and newspapers, this bizarre, subzero papier mache has been used to create boats, sculptures and ice domes. Sadly, no one has been able to overcome the frozen material’s flaws. Pyke continued his string of seemingly crazy inventions, but was widely ridiculed for his efforts. In 1948 he took an overdose of sleeping pills and killed himself. As for Perutz, he moved to molecular biology and analysis of proteins. A few years later he was able to study for the first time the structures of haemoglobin and myoglobin, and in 1962 he was rewarded for his work with the Nobel prize in chemistry. He died in 2002.

During the 1950s, a steel container containing a ton of chlorine trifluoride split, spilling its entire contents onto the concrete floor. The chemical reacted instantly, eating through thirty centimetres of concrete and another ninety centimetres of gravel beneath, while the noxious fumes ‘severely corroded everything that was exposed’. In the words of an eyewitness: ‘The concrete was on fire!’

Join Tabitha next week to find out more. Until then, get in touch with suggestions – be like Andres and tweet @chemistryworld, or email chemistryworld@rsc.org. Thanks for joining me, I’m Ben Valsler.