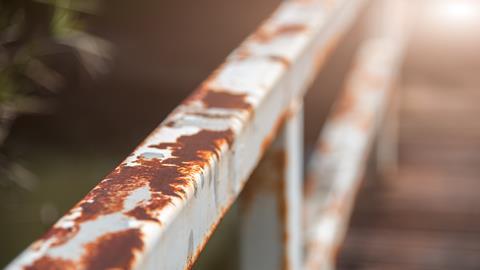 Brian Clegg shares the decaying yet colourful chemistry of rust

This week, a compound that no matter how hard it tries will never be liked or popular, especially among car owners. Explaining more is Brian Clegg.

When metals oxidize in air, some take on a handsome patina like the striking green colouration of copper when it gets a coating of verdigris, which can be copper carbonate, copper acetate or even copper chloride near the sea. But the result of iron's oxidation is less appreciated. If we call a car a rustbucket or speak scathingly of a rusty old wreck, we are not being complimentary. Even though rust - iron oxide - can give all the colours that are considered eye-catching and beautiful in the leaves of a New England fall, its associations are of neglect and decay. We just don't like rust.

The colouring seems to have given the word its name - 'rust' appears to have the same origins in early German as 'red'. We have been aware of rust and its dramatic coloration for as long as we have been using iron. The metal's existence has probably been known for around 5,000 years, but it was about 1200 BC that iron began to replace bronze as the material of choice for many tools, bringing down the curtain on the bronze age. Iron was cheaper than the copper and tin needed to make bronze, and with the addition of carbon could be made harder and more deadly. But iron was limited by the impact of rust. The Roman historian and natural philosopher Pliny the Elder suggested that rust was the outcome of a natural balance imposed by the gods to limit the destructive power of iron weapons. 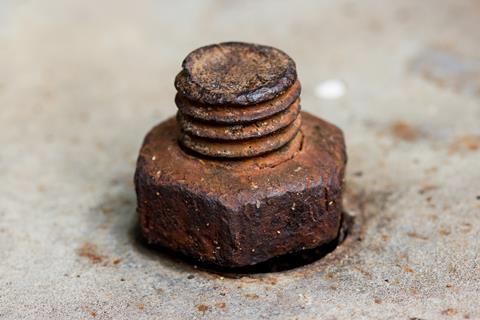 If you take a look at a piece of rusted iron it often has flakes and encrusting in a complex mix of shades, reflecting that this isn't a simple process of a metal reacting with oxygen in air. The primary reaction at the heart of rusting comes when an iron atom gives a pair of electrons to an oxygen atom and then reacts with water - if there's any present - to make hydroxide ions. These typically combine with the metal ions to produce iron hydroxides (in both iron(II) and iron(III) forms), before losing water to end up with that distinctive iron oxide crust. The reaction needs both oxygen and water present - either of these on its own will not produce much rusting.

Rust is, frankly, menace. Unlike some other metal oxides it doesn't act as a barrier to further oxidation, so the metal beneath the rust layer will continue to be attacked by oxygen and water and continue to rust, leaving corrosion to work its way through the whole piece of metal over time. Not only does rust weaken iron and steel, it can cause damage as it forms because the rust takes up significantly more room than the original metal.

As rust expands it can distort and put stress on parts of a structure. Where iron and steel are used to reinforce concrete, if oxygen and water can get to the metal, its expansion can shatter the concrete causing failure. The expanding build up of rust also seems to have been responsible for the collapse of a number of iron and steel structures, including the Mianus River bridge in Connecticut in 1983, killing several drivers. 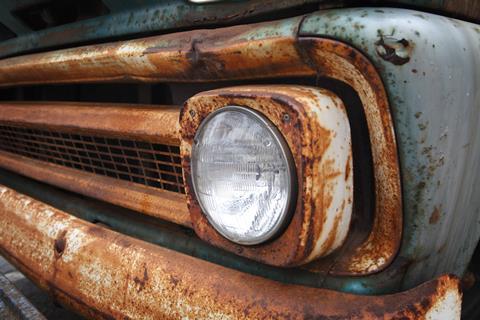 To prevent rusting, air and water need to be kept away from the iron atoms, removing the temptation to oxidize. An obvious approach is to paint over the surface, but a more subtle technique is galvanization, where a layer of zinc is plated onto the iron. This can be done by electroplating, but the most common approach, hot dip, finds iron or steel being introduced to liquid zinc at around 460 degrees Celsius. The zinc acts much like a paint, preventing the oxygen and water from getting to the iron, but even if there is a scratch through the coating, the zinc acts as a sacrificial anode, taking the oxidising hit on iron's behalf.

If the iron has already rusted, one approach is attack the rust directly with a rust convertor, which is usually based on phosphoric acid. This reacts with the iron oxide, converting it to iron phosphate. This is a black, hard compound that looks more attractive than rust and helps prevent further corrosion. The best approach, though, is to prevent the metal from rusting in the first place - and it's here that we meet stainless steel. 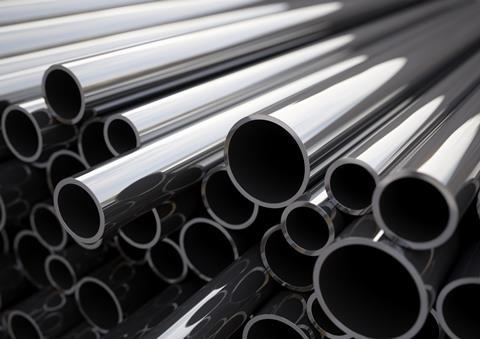 Stainless steel is an alloy of steel (itself an iron/carbon alloy), containing around 10 to 20 per cent chromium. This significantly reduces the likelihood of the iron in the alloy being oxidised. The chromium gets in first, forming a thin layer of chromium oxide on the outside of the metal, a process known as passivation. The oxide layer is sufficiently thin to be invisible, but prevents oxygen and water getting to the iron. Because the chromium is present throughout the steel, scratches in the surface don't provide a starting point for rusting - a new chromium oxide layer forms, rebuilding the protection.

Rust is no use to us. It may sometimes look attractive, but it inevitably marks a decline in the effectiveness of a piece of iron. Yet in a way this is rust's legacy. It will always be associated with entropy taking its toll in the form of decay. America even has a region where the steel and car manufacturing industries have collapsed, known as the rust belt. The symbolism of the strength of iron and steel - the backbone of the industrial revolution - being transformed to flakes and powder provides us with a vivid image that enriches our language just as rust itself destroys our metals.

So a few pros there among the long list of cons. That was science writer Brian Clegg with the decaying yet colourful chemistry of rust. Next week, a compound to help us socialise - or maybe not.

For some people - take autistic people or those who suffer from schizophrenia - social situations can lead to debilitating anxiety. But what if there were a handy nasal spray that could instantly imbue the inhaler with goodwill to all mankind; a chemical that just made social situations flow? Well, to be blunt, that chemical simply doesn't exist. But you'd be forgiven for thinking otherwise if you were to Google 'oxytocin'.

And to find out the reasons and chemistry behind why this compound is thought to improve your skills of socialising, join Josh Howgego in next week's Chemistry in its element. Until then, thank you for listening, I'm Meera Senthilingam.