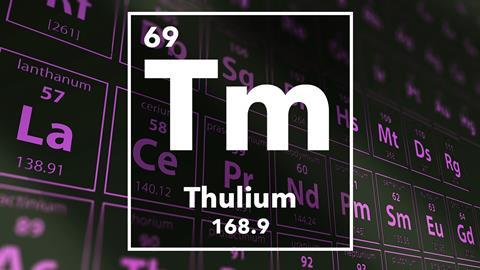 Named for a mysterious land in the north, Thulium celebrates Scandinavian culture

This week's element takes us into the unknown, entering dark, mysterious lands.

In medieval times, when maps were bedecked with strange and exotic unknowns, where the corners might be inscribed 'Here be monsters', the most distant place that could be conceived, lying beyond the borders of the known world, was labelled 'Ultima Thule'. Thule is sometimes pronounced Tooli, though it looks as if it should be Thool, which frankly sounds much more suitably dark and mysterious. Originally this was the classical name for a mysterious land, six day's sail to the north of Britain, thought by the Greek historian Polybius to be the most northerly part of the world. 'Ultima Thule' took things one stage further – it was the farthest part of Thule. 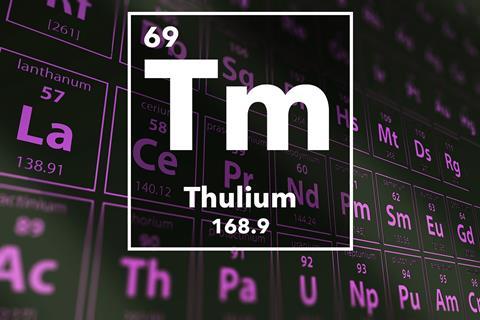 When thulium was named by Per Teodor Cleve in 1879, it was down to a slight misunderstanding of the meaning of thule. Cleve would eventually discover a total of four elements, and won the Davy Medal from the Royal Society for his work on the rare earth metals, but here he wasn't entirely accurate. He wrote 'For the oxide placed between ytterbia and erbia. I propose the name of Thullium derived from Thule, the ancient name of Scandinavia.' Not only had he misplaced Thule, he couldn't even spell it right, putting two L's in the name – but today we spell thulium, like Thule, with a single L. 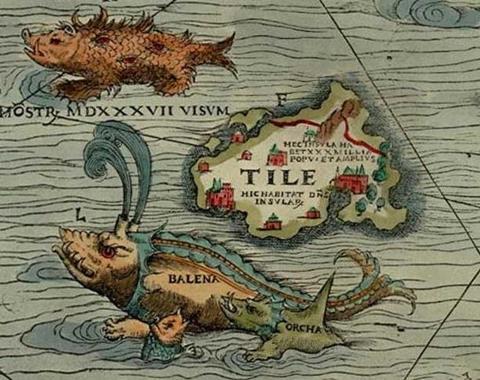 The mythical island of Thule on the Carta Marina, 1539

Sitting towards the end of the lanthanides, the floating strip of elements on the periodic table that squeezes between barium and lutetium, thulium has atomic number 69. It's one of the rare earths, elements that are largely misnamed as they are quite common. The name reflects the rarity of the original ore in which they were found – but in thulium's case it's not such a bad title as this soft, silvery metal is one of the rarest of the rare earths, and more valuable than platinum.

The initial discovery of the element was something of an accident. Traces of erbium and terbium had been found when ytrrium was first discovered, though it wasn't initially realized that they were new elements in their own right. Cleve was examining the erbium oxide separated from the mix and found that this too was corrupted. It had a small amount of an unknown substance which gave a slight variation to the atomic weight. The ever finer separation of the contents of this productive ore would eventually yield the oxides of two further elements – hol-mium and finally thulium. 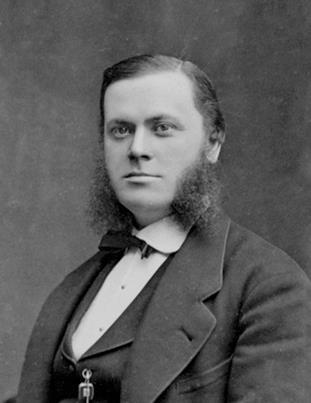 For a long time thulium was a Cinderella substance. There was nothing you could do with thulium that couldn't be done better and cheaper with one of the other elements. It looked likely that it would be consigned to the dustbin of useless chemical substances. It's notable that one science writer has said of thulium 'the most surprising thing about it is there's nothing surprising about it.' But that's a little unfair.

Thulium isn't exactly mass market, but about 50 tonnes of it is mined each year, broadly in three bands of ores - Australia and China, the US and Brazil, and India and Sri Lanka. And that's not an effort that would be put in for nothing.

The only natural isotope of thulium, usually found as an oxide is thulium 169. This is stable, but thulium 170 with a half life of 128 days, produced by bombarding thulium in a nuclear reactor, has proved a good portable source of x-rays. It was first suggested for this role in the 1950s and has frequently turned up since in small scale devices, such as those used in dentist's surgeries. As a low energy source, it's relatively safe, making it a good bet for low tech applications that also find it cropping up in engineering, where the x-rays can be used to hunt for cracks in components.

Less common, but still valuable, is thulium's role in doping a special type of garnet, yttrium aluminium garnet or YAG. The crystal is used as the active medium in a laser with a wavelength of around 2,000 nanometres, which is ideal for laser surgery, so once again thulium comes to our medical aid. 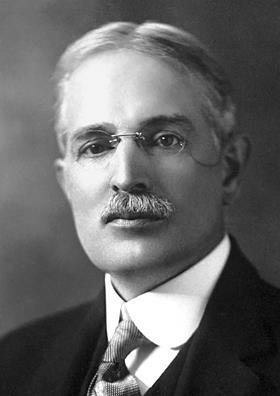 Thulium might not have many uses, but it did contribute to the Nobel Prize of American chemist Theodore William Richards. If ever a Nobel prize was awarded for sheer dogged hard work, then it was the one won by Richards in 1914. The Nobel citation must be one of the least exciting ever made. It was 'in recognition of his accurate determination of the atomic weight of a large number of chemical elements.' But this reflects for thulium alone a total of 15,000 recrystalisation experiments before Richards had a pure enough sample of thulium bromate to be able to fix its atomic weight to his satisfaction (168.93421 to be precise).

When Per Teodor Cleve named thulium he was working at the University of Uppsala in Sweden, the oldest of the Nordic universities. He wanted to celebrate historic Scandinavian culture – and even if he didn't quite position the mythological land correctly, for Cleve his new discovery would remain the Ultima Thule.

Taking us into distant lands there with the element that comes to our medical aid in lasers and small scale x-rays. That was Science Writer Brian Clegg with the chemistry of Thulium. Now next week, an element that can be manipulated to give us what we want.

Dark grey in colour and with a very glossy glass-like sheen, it looks like a metal but is in fact quite a poor conductor of electricity, and there in many ways, lies the secret of its ultimate success. By deliberately introducing impurities like boron or phosphorus one can subtly change the electrical behaviour of the element. Such tricks lie at the heart of the functioning of the silicon chips that allow you to listen to this podcast. In less than 50 years silicon has gone from being an intriguing curiosity to being one of the most fundamental elements in our lives.

And to find out more about how crucial silicon is in our everyday lives, join Andrea Sella in next week's Chemistry in its element. Until then, I'm Meera Senthilingam and thank you for listening.