A giant in the age of molecular biology 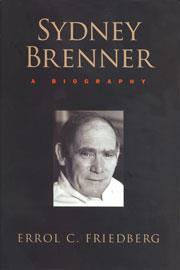 Today, British science needs a Sydney Brenner to stand up to our ’culture’ of overdocumentation and overmanagement with its priority areas, impact statements, Gantt charts and sandpits. Such a spirit might sweep clean the corridors of Swindon and the lairs of university administrators, and provide fresh air for young researchers to invent and follow their own scientific interests, as he has done, rather than the path most travelled. Instead our young scientific elite is being offered tours of supermarkets by one research council in the hope of appeasing government ministers.

Errol Friedberg has written an absorbing account of Sydney Brenner (1927- ), one of the founders of molecular biology. Remarkably, the author is chair of pathology at University of Texas Southwestern, and a practising scientist in addition to his craft as a writer of several fascinating books on the history of modern science. Brenner’s life is traced from his beginnings in a relatively poor Jewish family in South Africa. We hear that he was something of a prodigy and entered the University of Witwatersrand at 15, where he floundered as a medical student but thrived on supplementary science courses. During a short DPhil at Oxford under Cyril Hinshelwood in the department of physical chemistry, Brenner took a trip to Cambridge in 1953 to see Watson and Crick’s newly constructed model of double-stranded DNA. It was a revelation: ’On that day I knew exactly what I wanted to do. I wanted to work on genes and their function’.

Unfortunately Brenner had to return to South Africa in 1954, but by 1956 he was back, this time at the Medical Research Council Unit for Molecular Biology at the Cavendish laboratory of Physics in Cambridge, which was under the directorship of Max Perutz. Francis Crick, with whom he would build a lasting scientific relationship, had engineered a position for Brenner. It was here that Brenner encountered and extensively contributed to the tea-room approach to science based on extensive thought, including legendary late-night discussion, and often a minimum of experimentation. Brenner first examined the ’coding problem’. While it was thinking (and the results of others) that yielded the double helix for Watson and Crick, the elucidation of the genetic code required exhaustive experimentation and ultimately that was performed largely by the groups of Nirenberg and Khorana in the US, which is glossed over by the author. By contrast the definition of the true nature of messenger RNA was revealed by Brenner and Crick during a brainstorming session at King’s College, Cambridge to be an intermediary ’tape’ that is reloaded onto a ribosome each time it is read. Brenner and others then proved the validity of this speculation with incisive experimentation, establishing a milestone in our understanding of gene expression.

By the mid 1960s, the golden age of molecular biology was reaching its end. In 1962, Brenner, Crick and their colleagues had moved to the Laboratory for Molecular Biology (LMB), a purpose built edifice on Hills Road. Friedberg relates Brenner’s many subsequent accomplishments and endeavours: the epic tracing of the entire cell lineage of a simple metazoan, his painful period as director of the LMB, and after the invention of efficient methods for DNA sequencing in the mid-1970s, his support for the human genome project and comparative genomics.

In 1981, Brenner rejoined Crick who had moved to the Salk Institute in the US in 1976. After notional retirement in 1992, he evolved into a scientific statesman, with enormous influence as an ’institutional mentor’ in Singapore, Japan and the US, playing a key role in the development of Singapore’s Biopolis.

Friedberg’s book is thoroughly researched and based on numerous interviews. It contains revealing quotes for chemists: ’... it seemed to me that Hinshelwood was trying to merge chemistry and biology, something that I had long believed to be important’, and that from 1951. It contains an excellent collection of photographs; notably a cheery Brenner, an especially manic Jim Watson and an empty bottle of Beaujolais at Cold Spring Harbor in 1975. Others show the diminutive Brenner, who has been conspicuously dismissive of illness, with his walking stick, a legacy of a 1979 motorbike accident.

I strongly recommend this account of the life of a man of unusual talent, humour and intensity, and I hope that the present generation of young scientists can learn from Brenner’s commitment to concentrated thought about significant scientific problems, which must be coupled with a desire to accomplish the key supporting experiments.