Physical biology from atoms to medicine

Physical biology from atoms to medicine 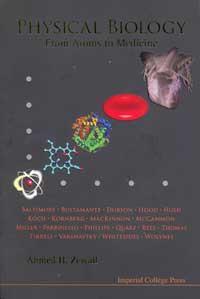 Fortunately, Physical Biology is far more than the inventive confidence trick that, after a few moments consideration, it appears to be. Delving beyond the smart cover, which bears Nobel Laureate Zewail’s name in gold, we first find what appears to be a proceedings volume. The heart sinks; is it one of those efforts that had their heyday decades ago, but which in these busy times we have no time to write for and less time to read? And then there is a group photograph in which the top left corner is surely a computer cut-and-paste. But soon we realise that the volume is a product of the 2007 Welch Conference on Chemical Research in Houston, Texas ... far more promising, as the excellence of these meetings has long been recognised.

Zewail, who chaired the meeting, assembled a stellar cast. In his Prologue, he outlines the philosophy behind the volume. We are told that tools are as important as concepts, a reasonable viewpoint; surely, technical breakthroughs have led the way in biology in particular. In the volume, Zewail attempts to bring together tools and concepts that are revolutionizing the biology of the 21st century. Tools for imaging, crystallography, single molecule experiments, computation, and more (but surprisingly little on genomics and genome sequencing). And concepts, such as macromolecule folding, molecular recognition, cellular and organismal complexity, venturing as far as the nature of consciousness. Zewail assures us that we are not reading a typical proceedings volume, but rather a collection of eighteen overviews. Certainly, the outcome is remarkably varied with contributions ranging from potted personal philosophies to more conventional reviews of a laboratory’s work.

What of opinion and philosophy? David Baltimore contributes a short essay, ’The preoccupations of twenty-first century biology’. Until a few years ago, modern biology was a quest for data, but now we are flooded with it. Further, the new facts and new materials are available to all, transferring the initiative from massive laboratories to those who can cut through the glut and ask the important questions. When this reviewer was postdoc at MIT, Alexander Varshavsky was just beginning his influential work on protein turnover, but here he wanders far afield to write on ’The world as physics, mathematics and nothing else’. This is an erudite, wide-ranging, short commentary on the unity of science. Varshavsky does not suffer fools and offers a withering denunciation of most of philosophy as a ’depressing sight’: a view held by many practising scientists, who unlike Varshavsky are too timid to express it, or don’t yet have tenure. Several contributors offer their views of the most important unresolved problems of the future. Unsurprisingly, and beneficially, these views differ considerably. Carlos Bustamante, known for his seminal contributions to single-molecule biology, beyond doubt a reductionist activity, discusses the way forward in understanding complexity in biology. This work will require new formulations of thermodynamics and an improved understanding of stochastic processes. Lee Hood writes another forward-looking chapter in which he describes the idea of ’P4 medicine’, which is in part a systems biology based approach designed to deal with the complexity of many human illnesses. Interestingly, we read that Hood’s early proposals on systems biology to the NSF failed to be funded, illustrating the value of pressing on with pet ideas until the tide turns. George Whitesides makes the perturbing assertion that our understanding of molecular recognition is largely illusory, in a piece that ’What is a hydrogen bond?’ from the Harvard Professor.

Other contributions written in a personal style give a more conventional summation of a laboratory’s work. Steve Quake’s delightful chapter ’Precision measurements in biology’ is a short historical and personal story. He quotes the joke ’ ... biology is a quantitative science; gene expression either goes up or it goes down’. Based on his account, and the present state of the world, that would now be better applied to economics. Rob Phillips uses specific examples to show how quantitative physics and descriptive biology can be brought together to produce a better understanding of living systems. In the process, Phillips throws in refreshing ideas on the importance of estimates and the virtue of wrong models in biology. Not surprisingly, he also has important views on the education of future scientists.

And what of recent scientific advances? John Meurig Thomas provides a scholarly 60-page review of the huge improvements that have been made in the imaging of samples ranging from atoms to cells based largely on the ’primacy of the electron microscope’. He reserves special praise for Zewail’s latest enterprise, an ultrafast electron microscope (UEM) that utilises coherent electron packets with a few as one electron in each. The history of the UEM is outlined in Zewail’s own intriguing account. Even the shorter contributions, written by masters of their fields, are penetrating. Roger Kornberg and Doug Rees present their views of the future of structural biology where larger structures and time-resolved studies present vital challenges. Rod MacKinnon’s Nobel lecture, a lucid description of his structural work on ion channels, is reprinted here. David Tirrell contributes a history and an update of unnatural amino acid mutagenesis, which one day might lead to new materials and even new life forms.

Computational approaches will surely play a leading role in the biology of the future. However, computer simulations of the folding of proteins or their conformational changes have been hampered by the short-time period for which they can be performed, despite increases in computer power. Michele Parrinello describes his group’s progress in performing long-time scale simulations by using collective variables that also make the results simpler to comprehend, and Peter Wolynes reviews his influential work on energy landscapes in protein folding and discusses how assemblies, such as cells, will require advances in theory. Chemists will be especially interested in Wolynes’ analysis of situations when linear-free energy relationships can and can’t be used. Chris Dobson examines protein folding from an experimental viewpoint, recognising that folding within the cell can differ from what we see in vitro. He focuses on amyloid disease and is remarkably optimistic about improved treatments based on our emerging knowledge. In his short chapter, Andy McCammon describes how computational methods are being used to address the interactions of drug molecules with their targets. He shows how molecular dynamics contributed to the discovery of an inhibitor of the HIV integrase, which binds to a conformation that was not revealed in crystallographic studies.

The nature of consciousness is without doubt one of the ’grand challenges’ in science and Christof Koch and Florian Mormann discuss what will be needed to determine the ’physico-chemical basis’ of this elusive notion. It is probably one of the few areas where virtually any research effort might be considered premature, and it will take some time before we can move beyond cocktail party science. Nevertheless, Koch and Mormann attempt to define the issues and the inclusion of this chapter is welcome if only because it portrays one of the highest mountains we have yet to climb.

And, finally, if you are missing quantum mechanics, there are two extra chapters by the recipients of the 2007 Welch Award in Chemistry, Noel Hush and William Miller: the first time in over two decades that this prestigious award has been given to theoretical chemists.

Clearly then, the blurb on the back cover that describes Physical Biology as an ’avant garde book’ is not nearly so far-fetched as it appears at first sight. The last few years have shown that we are not done yet in our understanding of biology. If a brainy young person can absorb but a small fraction of the ideas to be found in this stimulating volume, an exciting scientific career will be in the making. How might chemists contribute to this "century of biology"? There is some mainline chemistry here, but it is mostly physics. Yet, there is obviously much that chemists of all persuasions might contribute to further our understanding of living systems and they would do well to start by exploring Physical Biology.