The origin of chirality in the molecules of life

The origin of chirality in the molecules of life: A revision from awareness to the current theories and perspectives of this unsolved problem 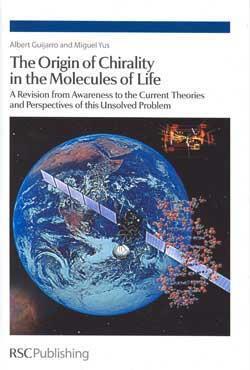 Life is homochiral. That is, the proteins and nucleic acids at the heart of terrestrial biochemistry (and, likely, extraterrestrial biochemistry, if it exists) are comprised of monomers of a single handedness. The biological rationale behind this is well understood: polymers of mixed chirality are less likely to fold into the beautiful, regular structures - such as alpha helices and the double helix - that dominate functional biomolecules. What is not understood, however, is how, in the lead up to the very first organism, homochirality arose on the pre-biotic earth.

Non-biological processes tend to produce racemic mixtures (equal amounts of molecules of both handednesses). The poor folding of heterochiral polymers, however, has led most researchers to conclude that life could not have (or was super-astronomically unlikely to have) arisen from such a racemic mixture. This observation has prompted decades of research into non-biological processes that break molecular symmetry and produce net chirality de novo.

In The origin of chirality in the molecules of life, Albert Guijarro and Miguel Yus review our knowledge of this vast literature. Or, perhaps more accurately, they review what we do not know about the origins of homochirality, which, as the book’s subtitle indicates, remains an ’unsolved problem’.

Many theories have been published, citing the weak nuclear force (which is known to be symmetry breaking), spinning reaction vessels, or asymmetric photolysis. A few have been tested, but all, by and large, have failed.

In this surprisingly engaging - if somewhat technical - book, Guijarro and Yus take the reader on a walk through a century and a half of glorious failure. Their book is exhaustive, informative and, to the delight of this reader - who is shatteringly tired of the wishful thinking that masquerades as science in this field - critical. It is thus well worth reading.