Biology is technology. The promise, peril and new business of engineering life

Biology is technology. The promise, peril and new business of engineering life 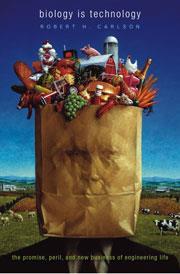 Robert Carlson, a physicist converted to a bioengineer/biotechnologist, has written a book which is essential reading for anyone wishing to understand the current state of biotechnology/synthetic biology and the opportunities/dangers therein.

The cost of DNA sequencing is reducing year by year and it has been predicted that a human genome could be sequenced for $1000 by about 2020, but bioengineers hoping to mass produce bioengineered products are facing the challenge of the complexity of biological systems.

Carlson describes the efforts of bioengineers to build synthetic biological systems that exchange information from compatible standardised parts and behave predictably. He uses a Lego metaphor to describe synthetic biological parts, but acknowledges that when such parts are assembled, many undesirable biological, environmental and developmental interactions occur. Designing biological systems is very complicated, and testing systems are difficult to devise.

Using several case studies, such as the work of Jay Keasling (University of California at Berkeley), to make a synthetic vaccine for malaria, and of Craig Venter (Synthetic Genomics) to produce low carbon synthetic fuels using algae, Carlson describes efforts to achieve returns on investment and profits, while benefiting society.

Carlson discusses in detail the problem of copyright and patenting in the field of biotechnology He emphasises the work of Stanford bioengineer Drew Endy who created the International Genetically Engineered Machines (iGEM) competition and the BioBricks Foundation where the oligonucleotides from the competition are placed in a Registry of Standard Biological Parts which uses Open Source licensing. Carlson provides a rigorous discussion of the merits and pitfalls of a solution-oriented approach using patent pools - a contractual arrangement agreed on by patent holders for licensing inventions that are used for other products made up of numerous patented products.

Carlson also discusses the bioterrorism dangers posed by the new biotechnology, advocating self-regulation of the industry and arguing against the moratoria which are proposed from some quarters.

In spite of these major challenges, Carlson predicts a successful synthetic biology revolution in the future which could constitute a trillion dollar bioeconomy.