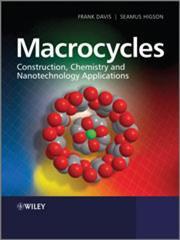 Macrocycles play important roles in many supramolecular systems and devices. Hence a book devoted to this area is timely and has the potential to serve a number of audiences ranging from advanced undergraduates to practitioners in the field.

This book covers a range of macrocyclic systems progressing through a series of chapters on small and complex ring systems. These include cyclophanes, crown ethers, calixarenes, cyclodextrins, cucubiturils, interlocked macrocyclic species and molecular machines. The chapters include details of macrocycle synthesis, a description of the complexation properties of the systems described and applications of the compounds. Each chapter contains an extensive bibliography that will be a good jumping off point for those wishing to find out more.

One area is which the book is weak is the quality of the illustrations. I found it difficult to visualise some of the three-dimensional structures of the interlocked and more complex species as all the figures are in greyscale. The quality of some of the chemical figures within the book is poor. For example, many of the calix[4]arene structures in the book are drawn incorrectly with a bond which passes through the middle of one of the aromatic rings of the macrocycle. These and other errors in the figures are distracting. It’s also disappointing that crystal structures containing NH hydrogen bond donors for anion complexation do not show the hydrogen atoms that are donating the hydrogen bonds.

Figures aside, the book provides a good introduction to novices in the field and points readers to the key references in the macrocyclic chemistry.