Conjuring the universe: the origins of the laws of nature

Buy this book from amazon.co.uk 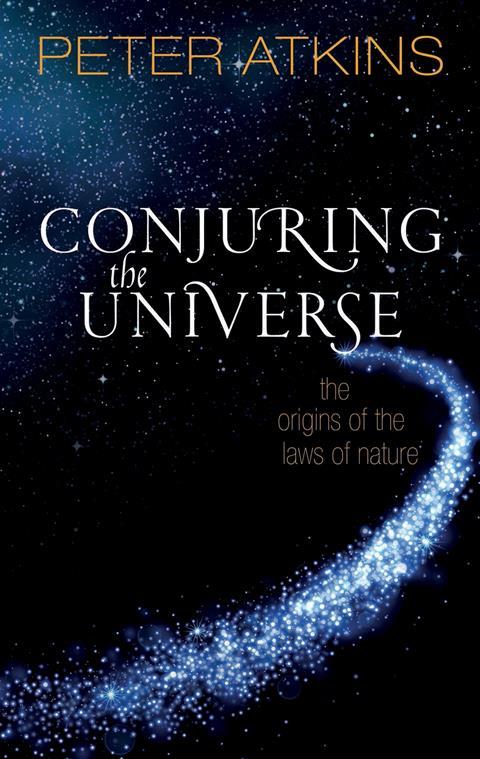 Peter Atkins is not a name associated with the meek or the mundane. Among his publications are titles such as What is chemistry? and On being: a scientist’s exploration of the great questions of existence, and of course the eponymous Atkins’ physical chemistry that has been a student mainstay for decades (OUP published its 11th edition earlier this year). Atkins doesn’t deal in small topics. And his latest offering, Conjuring the universe, does not disappoint. Taking on nothing less than the laws of nature, Atkins seeks to answer the question of how they came into being, and in doing so, composes an elegant love letter to the simplicity and beauty of the mathematics that govern our universe.

In a surprisingly concise 168 pages (not counting the notes, which present the mathematical equations as supporting players in this cosmic drama), Atkins takes his readers on a dazzling journey through the origins and consequences of the deepest laws and most fundamental constants of nature. The conservation of energy. The speed of light. Thermodynamics. Where do these laws spring from, and how have they resulted in the extraordinary complexity of the universe? Moreover, why should mathematics be the language that expresses them so usefully?

By ruminating on the minimum effort required for the creation of these laws and constants, Atkins posits that they came from very little, or perhaps nothing at all. If that sounds like a frustratingly vague answer to a profound question, then that is very much Atkins’ style. The word ‘conjuring’ in the title is apt: again and again Atkins introduces us to a deceptively simple idea, like a stage magician showing the audience an empty hat. He builds us up a little at a time, introducing an observation here, a mathematical theorem there. Then, with a final flourish, he produces the quantum mechanical rabbit seemingly out of thin air.

This short volume is essential reading for anyone who balks at the mention of Schrödinger, equations and cats included. Standing on the shoulders of Newton and Einstein, among a colourful cast of other historical figures, Atkins sweeps aside the mathematical mystique with his characteristic wit. He leads even the most unmathematical of readers (this one included) to appreciate his argument that the universe, in all its breathtaking intricacy, probably emerged from a nothing in which anything that can happen does, and in which our ignorance of the behavior of individual entities leads us to the basis of everything we understand about our world.