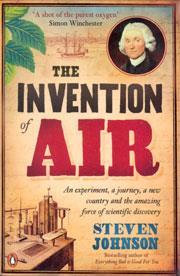 With the scientific specialism of today it is good to read of a man who sought to gain an overall understanding of the interrelationships between different areas of science - as well as faith and politics. He was an ordained minister but through interaction with the caffeinated minds of the 18th century coffeehouse society he became a great amateur scientist and radical thinker.

This book is not a detailed biography of Priestley, but rather explores the major influences which shaped his thinking. He is always associated with the discovery of oxygen, although he was neither the first, nor the most accurate, participant in its discovery. But Priestley did help to sketch out the first draft of the cycle of life on Earth - energy flows through plants, animals and microorganisms. He never presented these things in a unified system - that was left to scientists in the future - but he started thinking in terms of ecosystems. He published nearly 500 books on science, politics and religion and won the the Royal Society’s Copley Medal. He was a close friend of most of the great minds of the Enlightenment, including Benjamin Franklin, Josiah Wedgewood, James Watt and Erasmus Darwin.

This book provides many insights into the relationships between these men, especially between Priestley and Franklin.

As a Dissenter at the time of the French Revolution, Priestley, despite all his achievements, became very unpopular in the public eye, most notably fleeing from Birmingham in 1791 during the riots there. Eventually in 1794, like many other Dissenters, Priestley, at the age of 61, emigrated to the US to escape persecution. There he still had a hard time, losing his son and his wife not long after his arrival, but he did form a close friendship with Thomas Jefferson and stimulated American interest in chemistry; this is reflected in the establishment of the Priestley Medal as the American Chemical Society’s highest honour.

Johnson’s book is well written and paints a wonderful picture of a man who combined faith in science and progress with radical politics. His crossing of the boundaries has much to teach us today.

Ed: State budget cuts led to the closure in mid-August 2009 of the Joseph Priestley House, an ACS Historic Chemical Landmark in Northumberland, Pennsylvania, US. This followed an internal review by the Pennsylvania Historical and Museum Commission. It was claimed that the decision was based on low visitation and limited growth potential.

However, following extensive lobbying, the house reopened on 3 October, and volunteers from the Friends of the Joseph Priestley House led tours for the public during weekend afternoons in October, November and the first two weeks in December.

For more information on this historic house and future opening hours go to website.