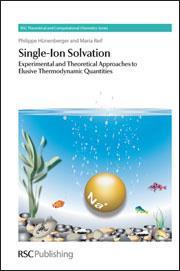 This book gives a comprehensive survey of principles, theory and experimental aspects of single ion solvation. The authors have thought long and hard about this subject and present the many subtleties involved. I found this informative but possibly somewhat off-putting to a beginner. However, the arguments are presented very clearly.

Unusually the authors make extensive use of numbered lists of points. To give one example, the different methods of estimating effective ionic radii are described in chapter 5 and are numbered from A10 to N10. Each method is given a paragraph or more and its assumptions clearly laid out. There is a critical discussion of the relative merits of different methods and an informative figure showing the range of results from both different and the same methods. I found that this type of presentation, which is repeated for many other properties such as standard states and half cell reaction thermodynamics, works well.

Throughout the book the authors distinguish between properties that can, in principle, be determined by experiment, such as the enthalpies of solution of pairs of ions, and those ’experimentally elusive’ properties, such as single ion solvation free energies and surface potentials, which can only be determined by introducing an additional non-experimental assumption. The authors list the assumptions and usually give a recommendation with reasons for their choice.

It is this combination of comprehensive lists and personal recommendations that will make the book particularly valuable. There are many tables of values of properties and a comprehensive survey of the literature with nearly 2500 references. Finally I must mention the charming cartoons that introduce each chapter.

I commend this book to all those who use ions and hope that it will be purchased by every chemistry research library.