Film: The Devil We Know 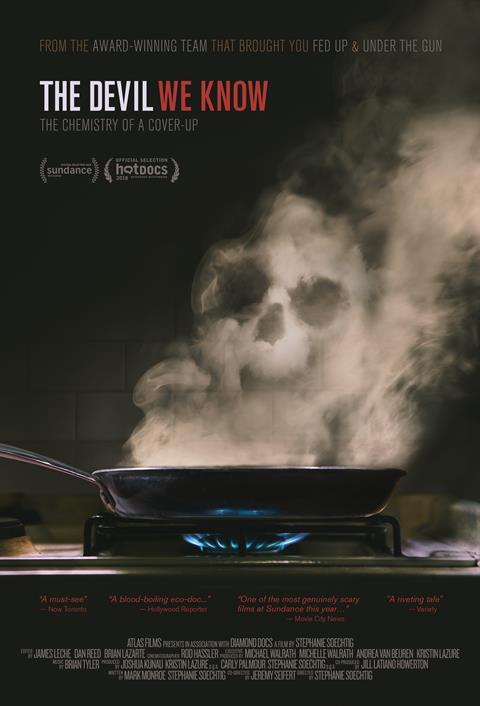 In the early 1980s, Ohio farmer Wilbur Tennant started losing his cattle. One by one, the animals’ teeth turned black, they wasted away and died. Tennant had stumbled upon an environmental disaster: the chemical company DuPont was dumping toxins into local rivers. And it turned out they did so knowing that the waste was detrimental to the environment and human health.

The toxins in question are perfluorooctanoic acid (PFOA) and perfluorooctanesulfonic acid (PFOS), called C-8 in the film. Discovered in the 1940s, perfluoroalkyl acids have since been used for making non-stick coatings such as Teflon, water-repellent sprays and textiles like Gore-Tex. PFOA in particular has an extremely long lifetime in the environment – even though it was phased out by 2015, it can still be detected in humans and animals everywhere.

DuPont became aware of the chemicals’ risks soon after discovering and commercialising them, but decided to keep this secret both from the Environmental Protection Agency and the public. The company continued to run off their C-8 wastewater into local rivers, slowly contaminating water supplies.

The Devil We Know follows residents and former DuPont plant workers in their efforts to expose the chemical company’s crimes. To pin down the persons responsible, the local community launches one of the largest human toxicity studies ever conducted. Over seven years, scientists evaluate 70,000 participants’ blood samples and medical histories, concluding that C-8-contaminated water supplies could be linked to diseases including cancer, thyroid disease, high cholesterol and ulcerative colitis. Soechting and Siefert focus not only on the legal battle, but also on stories of individuals who live with disabilities and illnesses likely caused by C-8 exposure. The film is largely a mix of interviews with people affected by the disaster, clips from DuPont employees’ testimonies and snippets of news programmes. It is fast paced and well produced on the whole, although overlapping images and audio at times create an overdramatised atmosphere.

The story fascinated me and I enjoyed the powerful personal angle, however I couldn’t help but think that the film does not deliver on its promise. It frequently mentions C-8’s universal use in all sorts of consumer products, but ends up focusing entirely on a small community affected by industrial waste dumping. Questions about how much viewers outside this community should be concerned are left unanswered.

In my opinion, this film would have been an amazing opportunity to delve into the science of toxicity. I would have liked to see the directors pick apart the still uncertain and often contradictory evidence regarding C-8’s toxicity, explain exposure pathways, and principles of toxicity and dosage. It would have been a great opportunity to bring in scientists and medical doctors, and maybe even do some on-screen chemical testing.

Instead, the scientific content I saw consisted of dodgy chemical structures and cringeworthy stock footage of scientists staring at blue liquids under a microscope. Instead of informing and exposing, I felt the film was intended to (rightly) outrage and (perhaps not so rightly) scare. Despite being a story worth telling, the chemophobia in The Devil We Know left me with an unpleasant aftertaste.