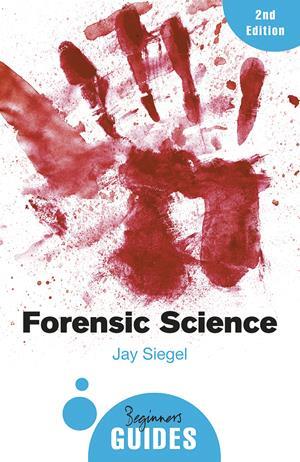 Although I enjoyed reading the forensic chemistry chapters in Forensic science: a beginner’s guide, which involve illicit drugs, fires, explosions, fibres, paints, glass and soil, it was the forensic biology chapters that most interested me. Such biological evidence features heavily in TV crime dramas these days, often encountered as tactfully covered dead bodies on mortuary slabs. However, these programmes rarely explain the science behind the evidence, something Jay Siegel seeks to remedy in this fact-packed monograph.

Among the chapters detailing cutting-edge forensic science, Siegel also deals with the more traditional crime-solving aids: fingerprints, bullet ridges, handwriting and hair. I was somewhat surprised to read that hair is no longer considered to be a safe guide for identifying a person. Equally unexpectedly, I learned that the vapour given off by hot Super Glue (ethyl cyanoacrylate) is the best way to develop fingerprints and make them more or less permanent.

A forensic scientist’s skills can be quite impressive. One example Siegel mentions is the reconstruction of a petrol bomb and detecting a fingerprint on it. If you thought an exploding bottle could never provide forensic information about the person who threw it, then think again.

Forensic science ends with a chapter on ethics, pointing out how difficult it is to approach forensic evidence and be free of preconceptions about what you expect to find. Indeed, there have been forensic chemists who were criminally-inclined themselves, in that they falsified their findings, thereby leading to miscarriages of justice. On the other hand, there are some who have solved cold cases through their superb skills.

I was somewhat surprised that Siegel, a US citizen, often refers to forensic detection in the UK. It would appear this country was a leading source of research in this area until the government closed the Forensic Science Service laboratories in 2012 and allowed private companies to do the work. Wisely, the US government has continued with its national laboratory programme. Thankfully, we still have the UK national DNA database, which contains more than two million profiles. Siegel quotes examples of how this resource has played a key role in some cases.

With 300 courses on forensic science now on offer in the UK, we may return to the forefront of forensic science. Students joining such courses might be well advised to start with Siegel’s admirable and brief account of their subject.