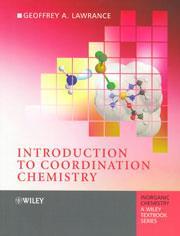 This is a wide-ranging survey of the chemistry of metal complexes, with nine chapters covering the bonding, structures, reactivity and applications of coordination compounds, and the techniques used to study them. Each chapter is subdivided with useful headings, and ends with helpful lists of key concepts and further reading. Appendices on nomenclature and the use of point groups, and a good index, are also provided. There are many figures and equations, which are mostly Chemdraw diagrams. These are clear, although not always very elegant.

The book is written in an accessible and conversational style, and the approach throughout is firmly descriptive. In particular, while the bonding in metal complexes is described thoroughly in chapters 1 and 3, the rest of the book avoids reference to orbital effects. Thus the treatment is superficial in places, and several discussions are truncated with phrases like ’that is a task for a more advanced text’.

The book has been well edited, and there are few typos. I found one factual error, in chapter 8, which says twice that dioxygen binding by haemoglobin does not involve oxidation of the haem cofactor. In fact, one-electron transfer from haem to dioxygen is a vital part of the O2 binding event. Interestingly, O2 binding by the iron protein haemerythrin is correctly described as a redox reaction in the next section. There are also a small number of made-up compounds used as examples, such as an unlikely tetrapyridyl macrocyclic ligand in chapter 4.

This would be a useful text for chemistry undergraduates taking an introductory course in transition metal chemistry. However, its approach of breadth over depth may make it most suited to students taking such a course as part of a wider joint honours or natural sciences degree.