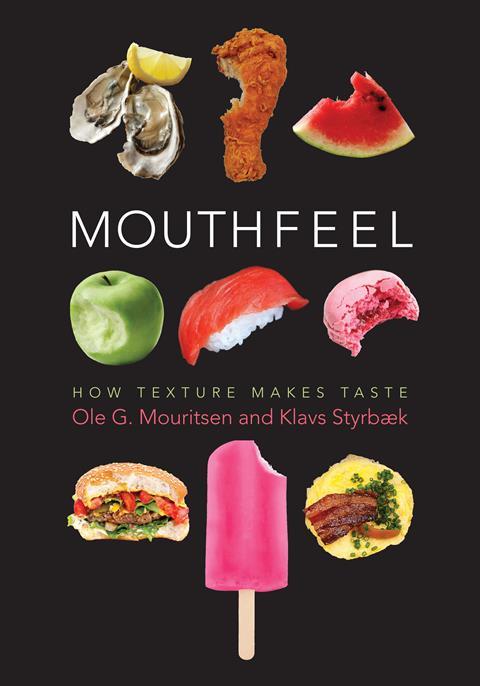 You may disagree, but I would argue that few things have turned the public on to chemistry more in recent years than gastronomy. ‘Molecular gastronomy’ techniques and equipment used to be the preserve of Michelin-starred chefs. Now, they’re available to anyone who wants a go, with judges barely batting an eyelid when amateur cooks pull out the liquid nitrogen or attempt spherification on competitions like Masterchef.

But there are still few educational resources that are readily available to the home cook. Mouthfeel, with its gorgeous photography and colourful diagrams, appears to be trying to change this. Indeed, the back of the book states that it is ‘for food lovers and food-science scholars’.

The book explores how our perception of food is influenced by the way it feels as we eat it. Through a materials science lens, we learn about what our food consists of on a molecular scale, its physical and chemical properties and how these can be manipulated to create the desired sensations.

For someone who has Heston Blumenthal’s entire back catalogue (either lovingly cared for or tattered through overuse), this should all be fascinating, but such is the dryness of the writing and the level of assumed knowledge in parts that I would find it difficult to recommend Mouthfeel to even a keen amateur cook.

Although not a recipe book, there are a handful within to try to demonstrate the concepts discussed. However, most of them are beyond most hobbyists, whether due to assumed ability (one step in a recipe says to ‘heat [sugar] until it caramelizes’ – a non-trivial task), or unavailability of equipment or ingredients. Recipes call for starfish roe, cod air bladder and even bull testicles, whilst necessary equipment includes a Pacojet. Even when the recipes are do-able, they feel tacked on, with no real explanation as to what is being demonstrated. A brisket recipe says to cook this tough cut of beef at 57˚C in a water bath in the section that explains how such cuts only start to become tender at 70˚C. Unsurprisingly, my dinner that night was borderline inedible.

The writing at times feels like a collection of facts without direction or application. For example, after exploring in depth the properties of different gelling agents such as gelatin, agar, alginate and gellan gum, the book provides no recipes or practical examples, failing to inspire the reader and leaving them to wonder why they should care. The same section also separates out gums from gelatin, agar and others, but fails to explain how they’re different or what they are.

Mouthfeel and texture play huge parts in our enjoyment of food. This book had potential, but was ultimately frustrating. Due to assumed knowledge and lack of doable recipes or demonstrations, it’s certainly difficult to recommend to foodies. As for its other intended audience – food science scholars – I can’t see what there is about Mouthfeel to recommend it over Harold McGee’s On food and cooking, the original food science bible.